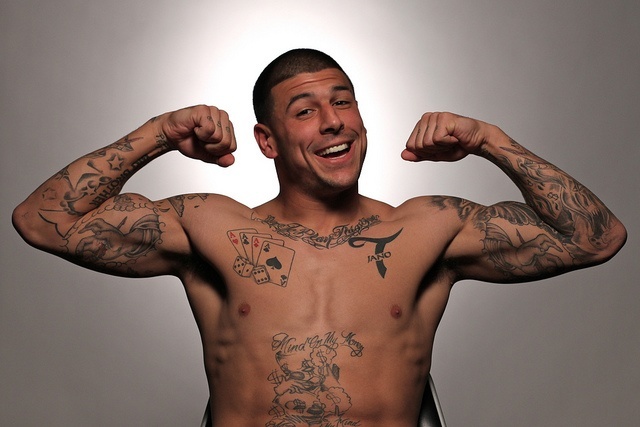 Some people have said that the New England Patriots should be partly to blame for bringing Aaron Hernandez to their town, but the Pats were well aware the NFL football stars murky past and made sure it was in writing when he signed his very lucrative contract. Hernandez was drafted by the Patriots in the fourth round of the NFL draft in 2010, and they were more than aware of the risk they were taking. They decided to roll the dice, and this has made Deflategate look like nursery school problems.

“We knew he had some issues prior,” Reese said. “Urban Meyer and Bill [Belichick] were very, very close, and I think Urban convinced Bill that, you know, that these things weren’t going to be an issue.” 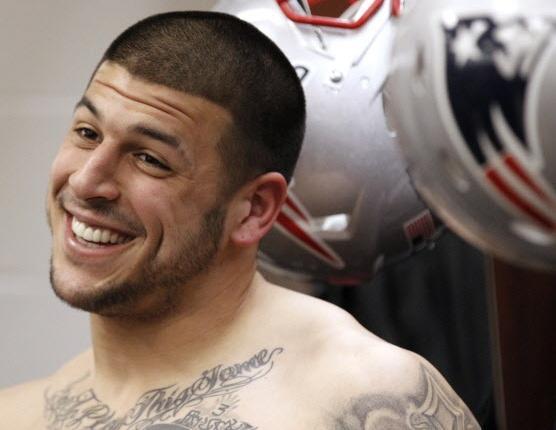 Hernandez’s troubled past wasn’t a complete mystery. He’d failed a drug test (or tests) at the University of Florida, and there were rumors about a thug life. So when the Patriots signed him to his rookie contract, the deal was structured so that “75 percent of the money in the contract set up so that he would only make it if he stayed out of trouble, didn’t miss meetings, was always there doing the right thing,” according to an MMQB interview with Floyd Reese, a senior adviser with the team at the time Hernandez was drafted.

“And for the period of the original contract, he lived up to every bit of it. So it turned out well,” Reese told MMQB. “Of course, after that, after he signed [his $40 million contract extension], things kind of went awry.”

After he signed the $40 million contract extension?

Hernandez is actually accused of killing two people in a drive-by shooting that occurred a month before the Patriots signed him to that $40 million contract extension.

That’s a little odd calling it awry when it’s more like f+++ing haywire is more like it.

Aside from the double-homicide charge he has yet to face, on Wednesday he was found guilty of first-degree murder in the shooting death of Odin Lloyd. 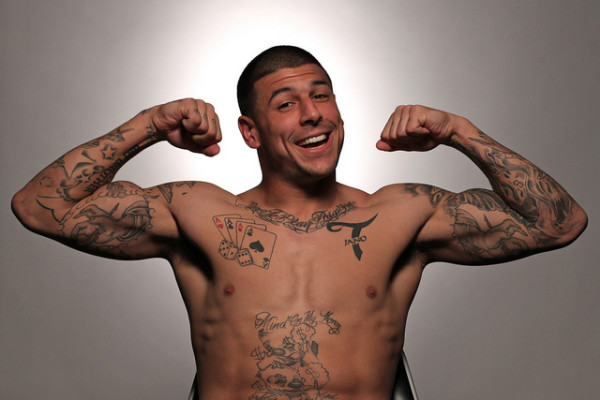 Reese acknowledges the Patriots were aware Hernandez “had some issues” at Florida, but doesn’t go into specifics. They definitely knew about the failed drug test(s), and it’s likely they knew of an alleged incident in 2007 when Hernandez, then just a 17-year-old incoming freshman, punched a bar employee in the head, bursting his eardrum. A police report was filed following the altercation, meaning knowledge of the incident likely would have turned up in any cursory background check.

“When he was at Florida, he had some issues there too, there were some things that went on. We all knew about it,” Reese said. “It was just from our standpoint, we were getting a first-round talent in the fourth round under a contract that was going to keep him in line or it wasn’t going to cost us a penny. The real downside for us was the fourth-round pick. The upside was he ending up being an All-Pro, for a while, until he got his second contract.”

There was also a psychological profile done before the 2010 draft that, according to the Wall Street Journal, indicated Hernandez enjoyed “living on the edge of acceptable behavior.”

It’s not clear if the Patriots had seen that report prior to drafting him since they refused comment to the Wall Street Journal, but it’s obvious they deemed him worth the gamble despite knowledge of a troubled history.

“It was just from our standpoint, we were getting a first-round talent in the fourth round under a contract that was going to keep him in line or it wasn’t going to cost us a penny,” Reese told MMQB.

Reese went on to say that Hernandez being drafted by a team located within a short drive of where he grew up (in a rough-and-tumble neighborhood of Bristol, Conn., outside of Hartford) may have contributed to his downfall.

“There were a lot of times where he would leave Foxboro [Mass., home of the Patriots] and drive back to Hartford so he could be with his guys,” Reese explained.

“Aaron grew up in a tough environment, but he went to the University of Florida to get away from Hartford,” Reese said. “To get away from that environment. He knew it would be better for him …. The truth is, the vast majority of guys that have maybe had a tough upbringing, when you throw them into a great locker room, great organization, great place to play, they come out of it. They see the other side of it. ‘Why would I ever want to go back to that other place?’ The problem is you run into an Aaron Hernandez, who can’t get there. He’s comfortable back in Hartford … with all that trouble.”

On Wednesday, Aaron Hernandez was found guilty of first-degree murder in the death of football player Odin L. Lloyd on June 17, 20013, and he’s been sentenced to life in prison without parole. He has also been indicted on murder charges in the slayings of two other men stemming from 2012. Hernandez’s lawyers are already combing through trial transcripts as they appear his brief for appeal, but that seems like throwing a penny into the ocean of trouble this man has gotten himself into.