Home All News Nate Takes A Hit For HOW TO GET AWAY WITH MURDER Recap... 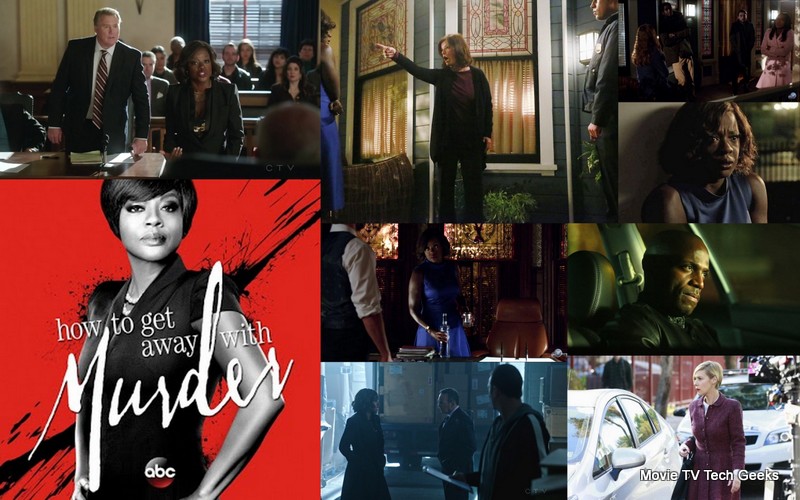 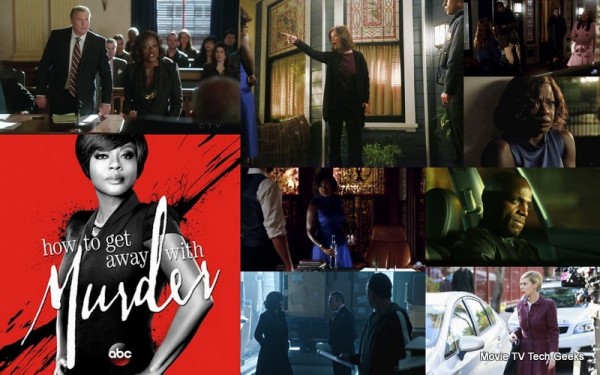 We have entered that time of TV show season where things are getting hot and the stakes getting high. Such is definitely the case with How To Get Away with Murder!

Last week we were hit with the bombshell (as the cliff hanger no less) that Sam’s body or what’s left of it, has been found. This week, we see just how Annie and the crew plan to deal with it. Annalise, in an attempt to “be normal” or whatever her normal is, takes a case in the midst of allegations that she killed her husband. She literally has to beg her longtime client not to fire her from the case. Of course, her begging wasn’t the typical, “baby please don’t leave,” but it was, nonetheless, her having to sell herself to the mob that she can do the job. They agreed to keep her on and so, we have our weekly secondary story. 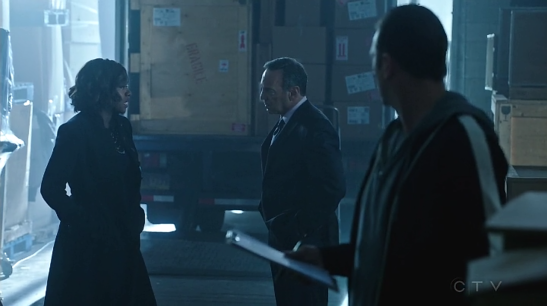 Almost immediately at the beginning of the episode too, a cop shows up at Annalise’s house to deliver the bad news to both her and Hannah. As soon as he tells them that they found Sam’s body seven days ago, Hannah goes off. “Arrest her, she killed her husband… she killed my brother.” She is hysterical and demands that the cop puts the cuffs on Annalise. The cop does not arrest Annalise (big surprise there) but that does not stop Hannah from silently plotting a way for the police to get to the truth. 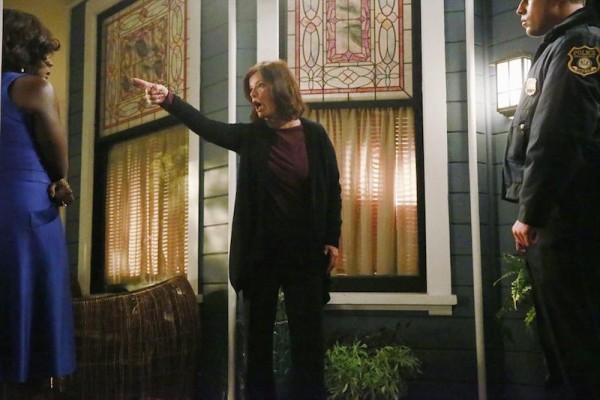 She visits the police lady that has been on Sam’s case and tells her all these things that she feels are grounds for Annalise’s arrest. The cop tells her that she can’t do anything because despite Annie lying to the police, she has nothing to go off of. Then good ole Hannah has an epiphany and decides to play dirty. “What if she threatened Sam’s life? I’ll testify to whatever you need me to.” This chick then tells an elaborate story about how she was there a few days before Sam went missing and that she heard them fighting and witnessed Annalise saying, “I will kill you.” Damn Hannah! This is enough for the police to have probable cause and they do it. They “Search that house.” 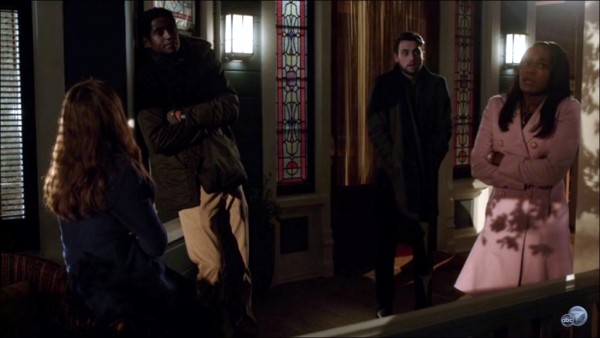 Meanwhile, the kiddos are having a hard time “coping” with what they did. At one point in the episode, a substitute professor that has been assigned to Annalise’s classroom is kicked out by Professor Keating herself (she came in like a wrecking ball). She then, in a clever way, tells the Keating Four “When in doubt, shut your mouth” by addressing the entire class room. That’s what the Fifth Amendment is for. Hmmm, I must remember that the next time I am on the witness stand about to incriminate myself. 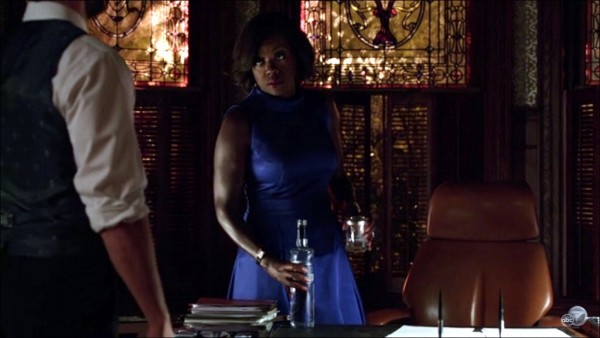 While Annalise needs to keep her eye on all the kids, Connor is who she should worry about the most right now. This dude is about to lose it. She overhears him talking to the others telling them that she is probably setting them all up. Annalise breaks up his “Norma Rea Rally” and calls him into her office. She speaks gently and calmly to him but not before she says for him to tell her if he thinks she is a bad person, sociopath and or heartless. Um yea Annie… probably all of these above.  This scene is interesting though because in the past, we have seen her show a motherly hankering to Wes. She tries to find common ground by connecting with him over the fact that they are very much alike. What, you both like dick (low blow, I know)? He confesses that he wants to trust her but it’s not coming naturally. “You’re not gonna trust me — that’s just not in your nature,” she tells him. Annalise tells him that she is his only option and she doesn’t require his trust, only his “obedience to her plan.” “The odds are better with me.” That sounds about right. 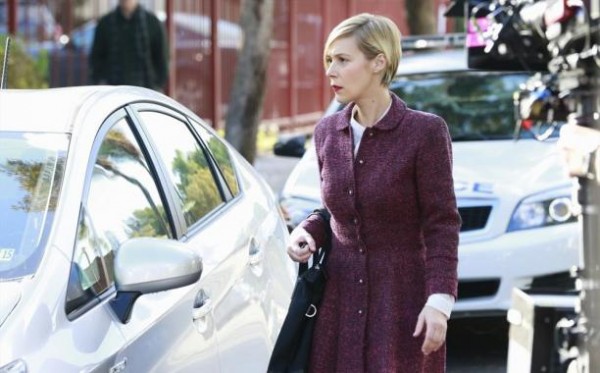 Then there is Bonnie who is ever sneaking around. She is clearly becoming suspicious and with the fact that she loved Sam, I bet it is just a matter of time before she pieces the puzzle together. When the police finally search the house (they too came in like a wrecking ball) they didn’t find anything. This was a very tense moment in the episode because they searched all over the house and when they came to the place where it all happened, Annalise stood at the top of the stairs staring down at the police lady while another police person did the sweep. I think HTGAWM fans all over did a concerted sigh of relief. In this scene though, when one of the forensic people found the scales of justice that go with the student trophy Bonnie takes it from him and put it where it belongs. Later in the episode, she finds out that Sam’s cause of death was due to blunt force trauma to the head. She may be annoying as hell, but she ain’t no dummy. 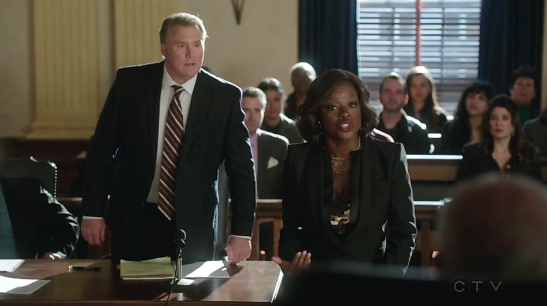 So much lead up to the final act and boy was it a doozy. Annalise is called into the interrogation room again. She is asked a series of questions, all to which she says she doesn’t know. Then she is shown a picture of a ring. At the same time, the Keating Four are watching the news at Wes’s places and when it is reported that a ring was found, Michaela starts to hyperventilate because she believes that it is hers. But it isn’t! The ring is Sam’s and it has… are you ready for it… Nate. Lahey’s finger prints on it. This bitch done framed her lover. 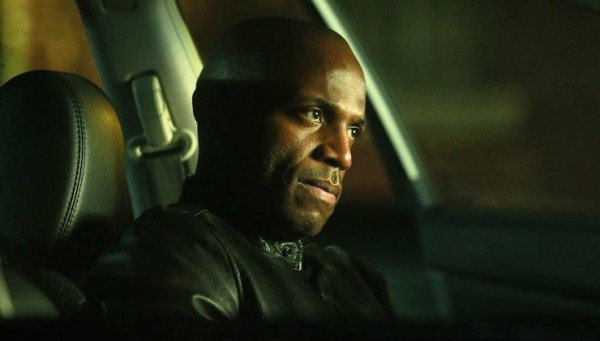 It ends with Nate being arrested and Hannah telling Annalise at the police station as they bring the accused through, “he did it because of you and my brother is dead because of you.” Like seriously, I. CAN’T. DEAL. Annie is too ruthless for me. 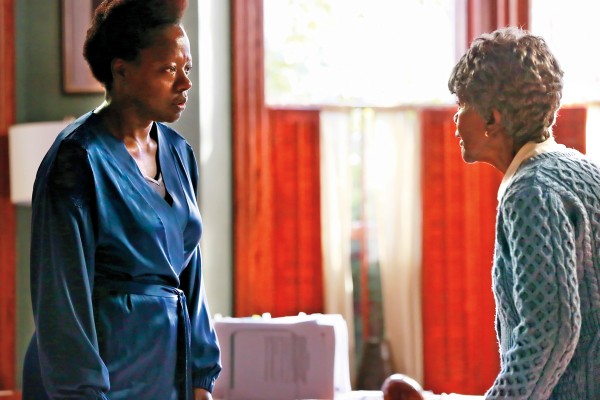 Whether this is all a part of her grand plan, DAMN, it’s risky. We’ll see how it all plays out next week. Best news is that Cicily Tyson joins the cast as Annalise’s mother. We’ll have to see if they get her to say ‘Rats in the corn,’ like she did on ABC‘s mini-series The Stand back in the 90’s.