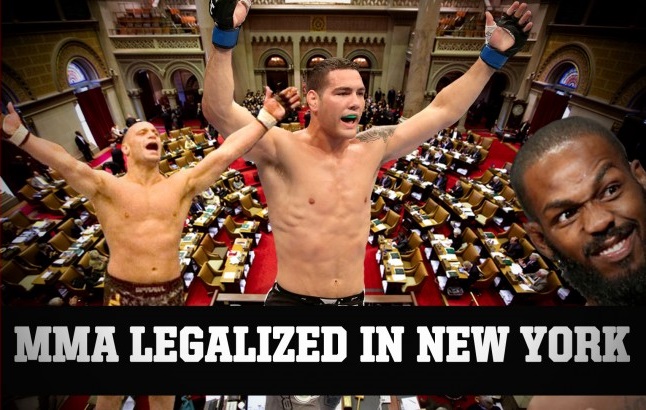 This week in MMA may not have featured any shows from the leading promotions, but thanks to the announcement of MMA’s legalization in New York, as well as the revealing of a number of solid fights, it was certainly one to remember.

Professional MMA contests and events can now be held in the state of New York.

The result of exhaustive efforts and quite a bit of time on the part of the UFC has finally become clear in this groundbreaking announcement, which will permanently change the landscape of the sport in a very positive fashion. It probably won’t be long before every major promotion holds an event in The Empire State.

The UFC has certainly been integral in achieving this major step for MMA, but as the industry leader, it’s also worth noting that issues with their owners, the Fertitta Brothers, as well as their casino chain, were largely what was delaying this legalization all along.

This point is only mentioned to respond to some of the backlash that Bellator and the WSOF faced for releasing official statements highlighting the company-wide excitement for the New York legalization. Sure, these organizations may not have helped in achieving the announcement, but once again, it wasn’t quite their mess to deal with.

Station Casinos, owned by the Fertitta Brothers, refused to adopt the ridiculous and intrusive plans of Culinary Workers Union, one of the largest workforce organizations in Las Vegas and the world, with ties all around the country, and in turn, the New York boycott spawned, basically. This battle had been raging for some time to this point.

To be clear once more, Frank and Lorenzo were certainly in the right in doing what they did, as they already provided their employees with comfortable working conditions that also suited their business model, but the fact remains that their involvement with an industry which accommodates “organizations” like the Culinary Union played a big role in the sport’s NY ban; of course, the vast majority of this role was played by the Union itself, as well as the corrupt (and in many cases, dangerously criminal) politicians with whom they were in contact. Still, it was once again their mess to deal with—and they did just that—but it’s accordingly important not to fault any of the other leading promotions in the sport for not contributing to the effort (and/or getting excited about the news).

Let’s allow history to be history, be thankful for the work of the UFC in achieving legalization, be satisfied that criminals are no longer inhibiting the development of this awesome sport, look forward to the massive fight cards that the state will be home to in the future.

The UFC also announced a number of awesome fights this week, many of which appear to be flying under the radar.

It’s also worth noting that, throughout the week and at the time of writing this piece, a rematch between Conor McGregor and Nate Diaz has been heavily rumored by several sources, but still hasn’t been announced officially.

However, these fights were confirmed by the UFC:

This is an excellent match-up between two men known for possessing heavy hands, and also, for owning quite a few first-round KO finishes. Especially in a division that is badly-in-need of contenders, what can go wrong?

Kyoji Horiguchi vs. Neil Seery at UFC: Netherlands on May 8th

This is a very intriguing fight between a man who certainly has the skills to grab some solid wins in the UFC, even at thirty-six-years-old, in Seery, and the skilled Horiguchi, who is always improving at just twenty-five years of age, especially now that he is training with American Top Team.

Despite both McMann and Eye certainly being two of the best bantamweights in the world, they’ve both struggled to put their skills together as of late, and in addition to being stylistically intriguing, this match captures the imagination because both competitors could benefit so heavily from a win.

Bellator MMA, despite also not holding an event this week, certainly didn’t take it off, as two awesome fights were announced:

Marcin Held vs. Dave Jansen at Bellator 155 on May 20th

This highly underrated matchup between two of the promotion’s very best lightweights should be thrilling to watch, and will definitely have major implications on the divisional landscape and the title. It’s also telling that Jansen, even after the loss to Brooks, still wants to compete with the very best of the division at a relatively late point in his career.

His willingness to battle the best, in addition to affording him a quick potential path back to a title fight, certainly benefits the fans.

Joey Beltran vs. Chase Gormley at Bellator 155 on May 20th

Joey Beltran is ready to try his luck in the heavyweight division once again.

The talented “Mexicutioner” dropped down to light heavyweight from his UFC days, then middleweight, and now, it appears as though he’s ready to compete against the biggest men in the sport. Despite a setback to the surging Kendall Grove, he had a pretty good run at middleweight, including a win over Brian Rogers; this move probably related to the cut being too hard, rather than his skills not being good enough for the 185 lbs. class.

Chase Gormley is a talented fighter in his own right, and this battle between him and Beltran should be notable—the result of this bout will directly affect the career trajectory of each man throughout the remainder of his days as a pro.

This week’s fight card drought will be a distant memory by the time Saturday, April 2nd rolls around, as the World Series of Fighting will be holding an awesome event on this date, which will see David Branch put his belt on the line against Clifford Starks in the featured contest, and athletes like Jon Fitch, Vinny Magalhaes, and Abubakar Nurmagomedov compete.