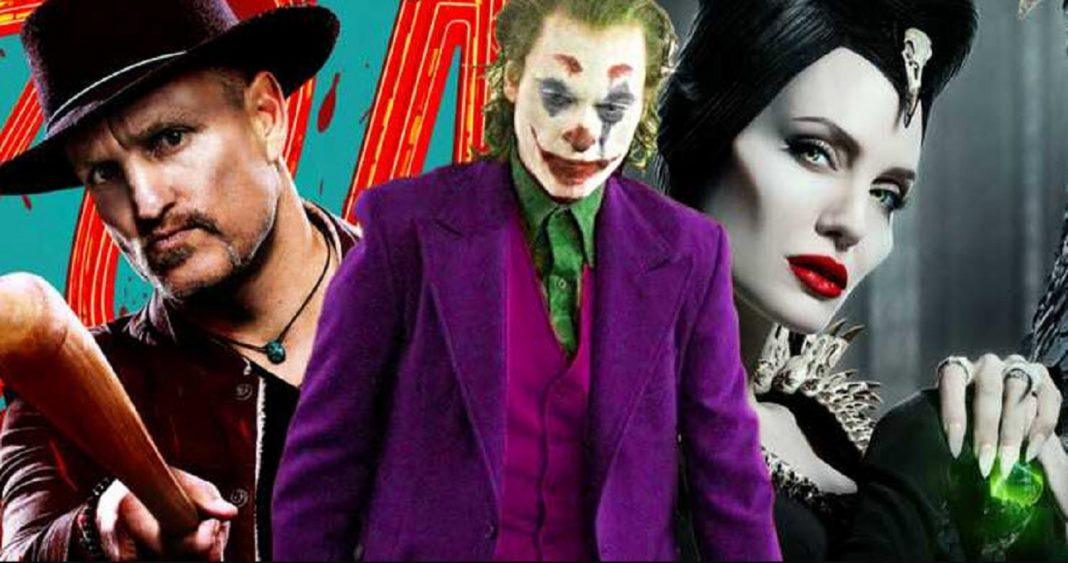 Angelina Jolie’s “Maleficent: Mistress of Evil” might have topped the box office charts, but DC Films “Joker” is still generating all the buzz as three-time nominee Joaquin Phoenix might have a good chance at finally securing down that elusive Academy Award. The film was the first winner for this year’s award season nabbing the Golden Lion at the Venice Film Festival. While setting a new October opening weekend record, the film looks to top $300 million domestically.

Warner Bros. will be marketing the film hoping to join the “Black Panther” style rank along with “The Dark Knight” as that rare comic-book film that hits at the box office while also winning an Oscar. The Best Actor category is where it has the most chance of winning. Phoenix has been nominated three times for “Gladiator,” “Walk the Line,” and “The Master.” He’s also been cited multiple times as the best actor of his generation that the Academy may finally give him his due.

His performance as a sad sack who takes a violent turn also plays into one of Oscar voters’ favorite tropes: It’s physically transformative. Phoenix lost more than 50 pounds to play the Joker, and the director Todd Phillips shoots the frequently shirtless actor in a way that doesn’t let you forget it. The best-actor Oscar often goes to a performance that’s perceived as physically arduous — think Matthew McConaughey in “Dallas Buyers Club” or Leonardo DiCaprio in “The Revenant” — and Phoenix puts all of that exhausted emaciation on the screen.This could give Phoenix an advantage over the best-actor candidate who so far looks like his strongest competition, Adam Driver in “Marriage Story.” Driver has astounded reviewers playing a character that most Oscar voters will have no trouble relating to — a bicoastal director negotiating a tricky divorce — and critics’ groups will probably hand him the most laurels this season.

There are precedents: Films like “The Blind Side” and “Bohemian Rhapsody” weren’t especially well-reviewed, but they were such populist powerhouses that voters couldn’t overlook them in the best-picture race, and the leads of both movies went on to win the Oscar. The difference between those films and “Joker,” though, is that “The Blind Side” and “Bohemian Rhapsody” were conventional crowd-pleasers, while “Joker” is a violent, feel-bad bummer.

The Walt Disney Co.’s “Maleficent: Mistress of Evil” knocked “Joker” out of the No. 1 spot at the box office, but just barely. “Joker” had stayed on top for two consecutive weeks. You can be sure analysts will question the star power of Angelina Jolie, who hasn’t been seen much on the big screen since the 2014 original. In that period, she went through the divorce from actor Brad Pitt which showed some of her missteps in trying to control the publicity during that tumultuous period.

Studios on Sunday say the film starring Angelina Jolie and Elle Fanning grossed $36.9 million in North America and $117 million internationally in its first weekend in theaters. The first film had a much stronger domestic showing, opening to nearly $70 million domestically in 2014, and the sequel was expected to earn more stateside. Although

“It’s not as strong as we hoped domestically, but it’s a good start for October and we have a great window leading into Halloween,” said Cathleen Taff, Disney’s president of theatrical distribution. “Most encouraging is the fact that audiences seem to be responding very positively.”

The A CinemaScore — in contrast to the mixed critical reviews — suggests that the film could have a longer life at the box office.

Although it fell to second place after two weekends at the top, Warner Bros.′ “Joker” continues to hold strong at the box office. It added $29.3 million in its third weekend in North America. The villain origin story has grossed over $247 million domestically. Worldwide, it’s earned $738.6 million, and has already surpassed the lifetime grosses of “Justice League” and “Suicide Squad.”

Now the big question is whether the R-rated film will make it to $1 billion, but with a $55 million production budget, it’s already a massive hit for the studio and will likely also become director Todd Phillips’ highest-grossing film too.

“It’s already in territory that nobody thought it would get to. It’s achieved a box office that is above the wildest expectations of the studio and analysts,” said Paul Dergarabedian, Comscore’s senior media analyst. “Even if the box office stopped right now it’s an absolute, unqualified success.”

Third place went to another new sequel, Columbia Pictures’ “Zombieland: Double Tap” with $26.8 million. The R-rated comedy comes 10 years after the original, reuniting Jesse Eisenberg, Emma Stone and Woody Harrelson with director Ruben Fleischer. The three return in the sequel to fight for survival in a post-apocalyptic world. They do so alongside a handful of newcomers, played by Rosario Dawson, Luke Wilson and Avan Jogia, to name a few.

“Three films earning over $25 million, that doesn’t happen very often,” Dergarabedian noted, although the weekend is down from last year when “Halloween” opened to over $76 million.

In notable landmarks, “Hustlers” crossed $100 million domestically this weekend. It’s the second STX film to do so this year after “The Upside.”

But the year is still down 5% from last year.

“It was a great weekend for sequels and great weekend for indie movies,” Dergarabedian said. “But we’re still struggling to get ahead of last year. We’re racing to the finish line here. We’ve only got 11 weekends left to go.”

One of the bigger box office surprises came from Shia LaBeouf’s “Peanut Butter Falcon” about a down-and-out fisherman who befriends a young man with Down syndrome determined to attend a wrestling school. The film won the Audience Award at South By Southwest in March which inspired the distributor to put up additional marketing funds. It is a modern-day twist on “Huckleberry Finn” grossing $20 million in the United States making it the top platform release of the year at the specialty box office.

This is the film that could bring Shia LaBeouf back to star attention after his many years of not so good headline-making antics.

“It was devastating when the buyers weren’t able to see what we were seeing,” said Zajaros. “They wondered whether people would be interested in seeing a movie starring a person who actually has the syndrome.”