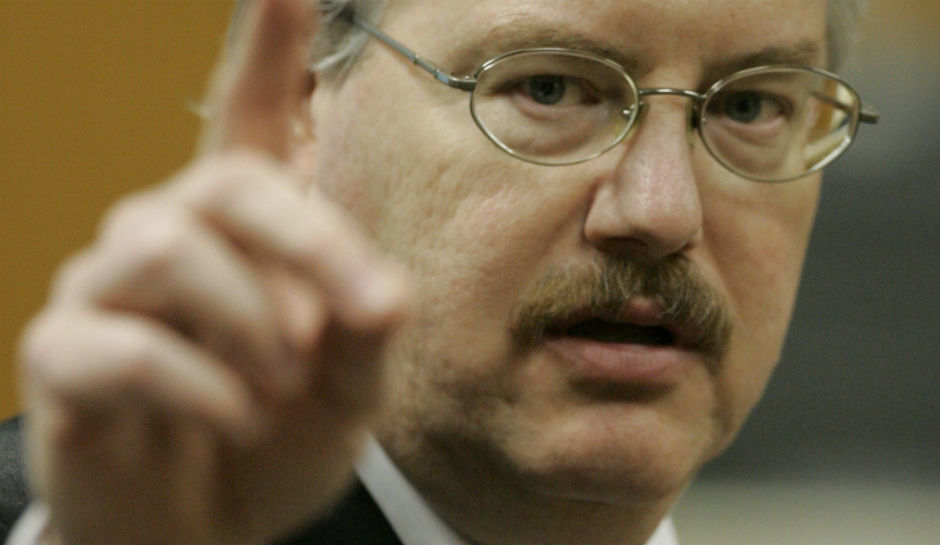 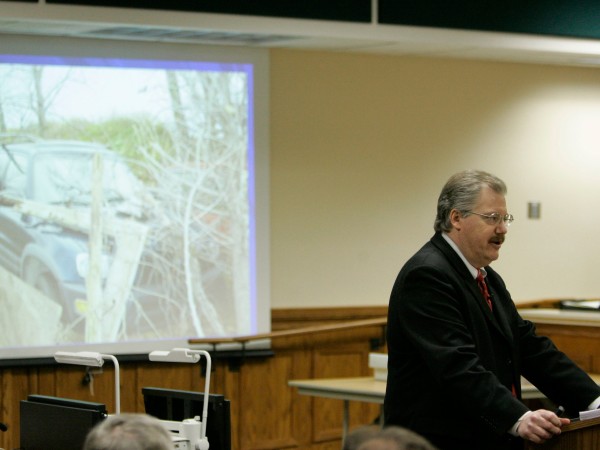 The “Making a Murderer” opening music reminds me of “Game of Thrones.” It’s a bit creepier, but very ominous sounding which is a perfect fit as Steven Avery faces life in prison for a crime that I have to say he didn’t commit.

If I were on the jury I would set the man free based on what I’ve seen so far. I have not been privy to each piece of evidence of course so I guess my opinion being based solely on a film is no better than the public opinion in Manitowoc County being against Mr. Avery based on local TV news reports.

As Episode five opens, Judge Patrick Willis allows the FBI to do some shady testing on the blood found in the Rav 4. The defense argued the testing was not reliable and the FBI had stopped using the tests because of that fact in the past few years.

It appears that even the judge is not seeking actual justice. The goal seems to be a conviction of a man that is supposed to be presumed innocent.

Avery’s lawyers are anxious to get the three added charges dropped before the trial begins. This seems inconsequential to me since I know more about fantasy football than I do the law.

I would think 100 extra charges would not matter if the main one was murder. However, the defense explains to us ignorant viewers that more charges just stack the deck against their client.

As the trial gets going, it’s hard to ignore Teresa’s Halbach’s parents. These people lost their precious daughter, not only to death, but to a horrible slaughter in which she suffered greatly. Their pain is unimaginable.

I am totally engaged in the battle between the legal teams. On one side we have Dean Strang with Jerry Buting who seem to me worthy of hanging out with superheroes. On the prosecution side we have a fat faced Ken Kratz whose voice makes me want to fight him in a steel cage match.

Avery’s defense team has the greater challenge. They are representing an accused killer with a family that looks like they just came out of the coal mines. No offense to this family, but the contrast between them and the local authorities that Ken Kratz is “defending” against framing charges is clear as day.

Kratz’s people are dressed in suits and ties or uniforms while everyone besides the lawyers on Team Avery looks like a below-average Joe. No way these people could be more believable than a man with a badge, buzzcut, and a big hat right?

Once again we see the main focus from the defense team is on Officers Lenk and Colburn whose actions are continually called into question. Colburn looks more like a serial killer than Avery. Just saying.

Strang and Buting try early on to get a mistrial based on Brendan Dassey‘s statements, but Judge Willis isn’t going for it of course.

For me one of the biggest obstacles in the case for the defense is the fact that they are not allowed to offer up alternative suspects. It’s not anything goes, as the judge sets boundaries before each case depending on the details. In a murder trial it would seem like a key idea to point out other suspects, especially when a murder victim is much more likely to have been killed by someone close to them.

An opportune time for a different suspect than Steven Avery would have been when it was revealed that Teresa Halbach’s voicemail had messages deleted after her death. Her brother had the password but says he didn’t delete any. I would guess he is telling the truth but someone deleted them and it sure as hell wasn’t Steven Avery.

Her ex-boyfriend Ryan Hillegas helped guess the password to her voicemail so the family could print off the records when Halbach went missing.

Surely the investigators followed up on the deleted voicemails? Nah, that would have been a lot of work and might have hampered their efforts to stick Avery back in his cage.

Buting tried to introduce some retrieved voicemails as evidence around this time. Just after Ken Kratz’s eyes nearly popped out, he objected and after a debate on theories of the crime, old Judge Willis said, “I don’t see the relevance of the voicemail retrievals.”

Don’t see the relevance of deleted voicemails that could help solve this crime. OK….

Ryan Hillegas appeared shaky at best on the stand. Halbach’s former lover couldn’t remember the time of day when he reportedly last saw her alive. Not even if it was morning, afternoon, or evening. Damn son, are you a moron or just lying? Has to be one or the other.

The next witness for the prosecution that seems believable will be the first, for me at least. The lady who first spotted the Rav 4 says it took her only about 30 minutes to find the vehicle once she entered the Avery salvage yard as part of the search team.

30 minutes is fast considering the shots of the property that show over 1,000 cars in my estimation.

On the stand, she said, “God showed her the way.”

Next we move on to officer Colburn who looks to have ice water in his veins. He’s not related to the Averys but he appears to have, a similar IQ of around 70 as he gets tripped up by the defense.

Colburn looked bored with Dean Strang’s questions until a  recorded call is played for the court in which Colburn identifies Ms. Halbach’s car as a 99 Toyota. He was calling to check on the license plate number of a vehicle belonging to a missing person, reported to him by another detective.

The dispatcher confirms the name of the missing person as Teresa Halbach, but Colburn asks her to confirm “99 Toyota right?” This is key because there is no way this officer should not known the year and make of the vehicle just by the plate numbers.

I would think the other detective who had called him about the missing person would have given him that info along with the tag number. Colburn doesn’t make the argument though, or if he does it isn’t shown in this documentary.

So we are to assume he is looking at the vehicle when he calls the dispatcher. That would be two days before the vehicle was found on Avery’s property.

This bombshell should have been enough to convince at least a few jurors that Avery was set up and it’s a wonder the judge didn’t remove the jury before it got worse for the prosecution with this slow-witted witness.

I can see Judge Willis leaping off the bench to cover Officer Colburn’s mouth if he started a sentence with, “I might as well confe……”

That wrapped up episode five with me still shocked that this all really happened. Ten years of filming makes it clear to me what happened. I just don’t know if it was as clear to the jurors in real time, as they held Steven Avery’s freedom in their hands. 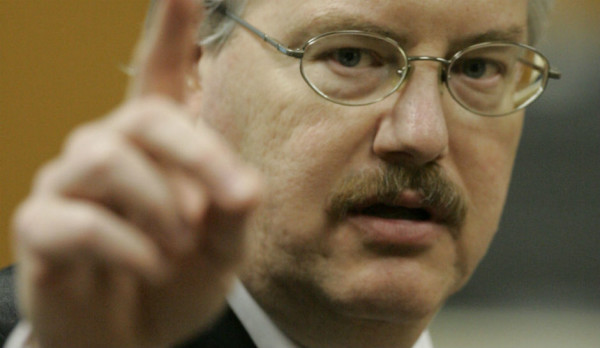 After losing business due to his Yelp getting spanked rather hard, former Calumet County District Attorney Ken Kratz made a claim that the filmmakers of “Making A Murderer” left some major key evidence out of the documentary series. They’ve quickly responded back.

I think this claim will easily make many roll their eyes as this series is a far cry from what Michael Moore would have done. He should be grateful that these two women are true documentarians and let the facts fall where they may so audiences can decide for themselves. That is what makes a documentary much more powerful and trustworthy.

“Ken Kratz is entitled to his own opinion, but he’s not entitled to his own facts,” filmmaker Laura Ricciardi told The Wrap. “If he’d like to put together a documentary and try to discredit us in some way, he’s welcome to do that. We’re not going to be pulled into re-litigating the Halbach case with him.”

Added filmmaker Moira Demos: “I guess I would ask Kratz what he would trade it for. We tried to choose what we thought was Kratz’s strongest evidence pointing toward Steven’s guilt, the things he talked about at his press conferences, the things that were really damning toward Steven. That’s what we put in. The things I’ve heard listed as things we’ve left out seem much less convincing of guilt than Teresa’s DNA on a bullet or her remains in his backyard.”

Filmed and produced over ten years, Making a Murderer examines the twist-filled case of Steven Avery, a Wisconsin man who was released from prison after being exonerated for sexual assault only to be arrested again and convicted for the murder of a young photographer, Teresa Halbach.

Avery is currently serving life in prison without the possibility of parole. But he maintains his innocence and believes he was framed in retribution for filing a $36 million lawsuit against the county and authorities.

Kratz, who prosecuted both Avery before resigning from his position as D.A. in 2010 following a sexting scandal, told PEOPLE on Tuesday that Avery “targeted” Halbach, citing Halbach’s Oct. 10, 2005, visit to the property owned by Avery’s family for a photo shoot for AutoTrader magazine. According to Kratz, Avery allegedly opened his door that day “just wearing a towel.”

“She was creeped out [by him],” Kratz said. “She [went to her employer and] said she would not go back because she was scared of him.”

At 8:12 a.m. on Oct. 31, the day Halbach was killed, Kratz said Avery calledAutoTrader magazine and asked them to send “that same girl who was here last time.” He said that Avery knew Halbach was leery of him, so he allegedly gave his sister’s name and number to “trick” Halbach into coming.

This call to AutoTrader magazine on the day of Halbach’s death was just one of the pieces of evidence Kratz cites as being left out of the Netflix series.

“It was a nearly six-week-long trial, and it would just be impossible for us to include all of the less significant evidence,” Ricciardi told The Wrap when asked why some evidence against Avery was excluded from the series.

She added: “Without getting into trying to refute specific pieces of evidence, I would say that our role here was as documentarians. We were not advocates. We’re not part of an adversarial system. We were documenting this case as it was unfolding.”