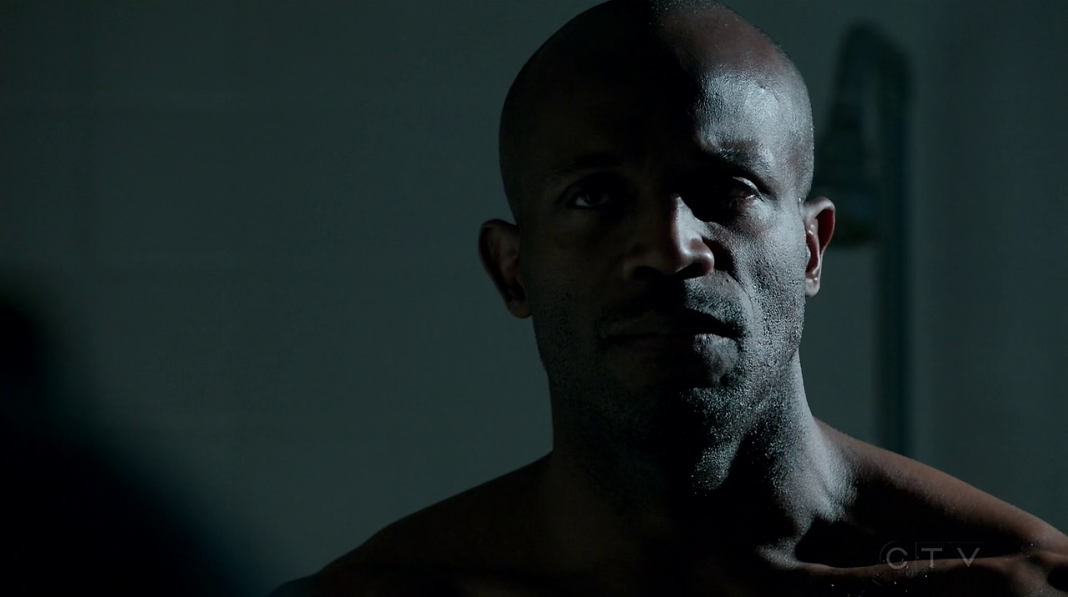 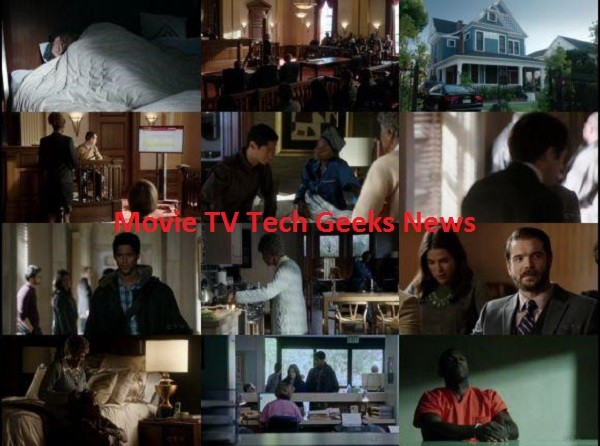 This week, How To Get Away With Murder was so good. On the last episode, we saw Annalise frame her lover Nate Lahey for the murder of her husband (cold blooded). It ended with her calling her momma telling her she needs her.

Well guess what, momma showed up this week and showed out. I mean, what do you expect though, Ciceley Tyson played the part. It opens up with a fine ass Nate being booked, searched and locked up. Like, Shonda really gave us ladies something to look at this week and OMG… but this is about the plot.

Immediately we are taken to momma, Ms. Ophelia Hartness, arriving at the house. Bonnie and Frank do not know who she is. She comes right in through the front door and scolds them for having it unlocked. They tell her that they are not accepting new clients at the moment and she tells them, “You don’t recognize VIP… your boss came out my V and her daddy’s P” or something like that. Nonetheless, what a way to introduce yourself.

Momma goes up stairs opens up the blinds allowing sunlight to show on Annalise’s face. She picks up around the room and tells her to get up because her butt stinks. She fusses at her and pulls on her but Annie just rolls over. From this, she can see that something is really wrong with her baby.

She does the momma thing and holds her. Ophelia gives her a pep talk and proceeds to get rid of all Sam’s stuff. Annalise protests and we find out that her real name is Ana Mae. I thought she was making a What’s Love Got to do With It reference when Ophelia calls her that, but no. Annalise was born Ana Mae and that is the name she’s going to be called. At least by her momma. 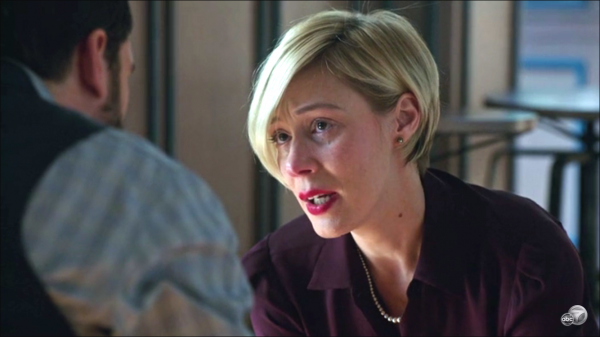 Meanwhile, the Keating Four and Bonnie take on a case and guess who’s leading it? Yep, Bonnie. This was an interesting storyline because one, it dealt with a nurse accused of raping her male patient and two, it gave us a little glimpse at what Bonnie can do without momma Annie down her back. She stumbled in the beginning, even telling the jury in her opening statements to find the defendant guilty (wow, really Bonnie). She corrected herself but not before kicking herself in the butt. 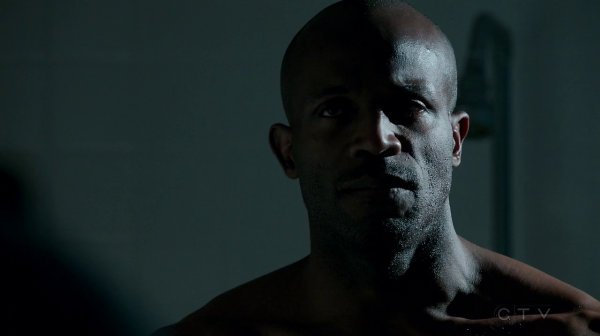 Outside of the case, they deal with the guilt of Nate taking the fall for them. Well, really it’s Michaela who is taking it the hardest and with Rebecca being called in for questioning by the police because it was found that she made a call to Nate on the night of Sam’s murder, Michaela wants to know what she’s telling the cops. She poses as a stenographer and flirts with the DA working on Nate’s case. She finds that Rebecca lied to the cops and said that Nate tried to get her in on his murder plan and when she refused, he said he’d find a way to do it without her. This of course, prompts pussy whipped West to investigate into his suspicions about the woman he so honorably defines. He finds out that she indeed lied to him about what happened to Rudy, the guy who lived in the apartment before him, and that he was actually taken to the hospital for an overdose and is now in a psych ward. Why did you even trust her West? 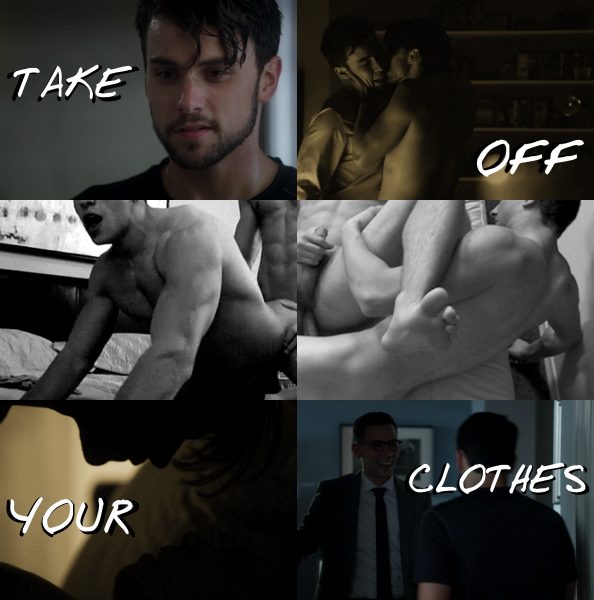 Most of the group is mum and solemn except for Connor who is perky and celebratory. He goes to his used to be fuck buddy’s, but now it’s getting more serious, house bringing sparkling cider (he has to keep up the rouse that he is in rehab) which sparks Oliver to question why he has not been introduced to the team. I guess he feels that he does all kinds of hacking shit for Annalise, he should at least meet the people Connor spends most of his time with. 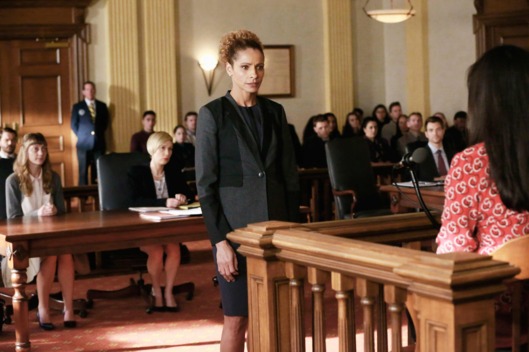 In the courtroom, Bonnie has some trouble getting her shit together. After some evidence was entered into court that pretty much damned her client, she digs deeper to find a way to make it happen. What she and the crew uncover is that the man accusing her client of rape is actually gay and the hospital lawyer that pushes Bonnie to settle for a case payment is the man’s lover. Yep, they were in cahoots the whole time and the plan was foiled in court. The judge dismisses the case and bam… Bonnie is a certified power house. Then, after the win, Bonnie sees Asher in the parking garage and she gives in to the sexual tension that is so evident between them. They get it on right there amongst cars.

Back at the house, momma and Annalise finally have it out and it is revealed that Annie was raped by her uncle AND her mother knew. This is a very important aspect of her life because according to Sam, when she first started going to him back in the day, she is the way she is because of her mother. Wow, that’s heavy. But momma took care of it when she burnt that house down and the uncle burned in it. 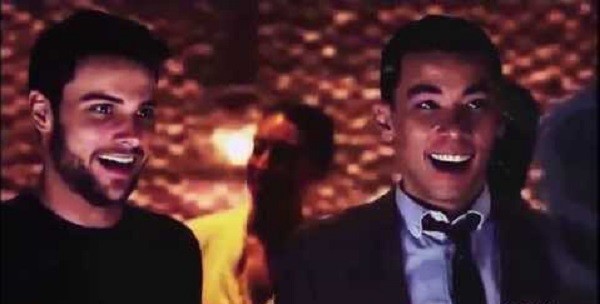 At the end, Oliver meets the crew, gets drunk and confesses his love to Connor. Laurel poses as Rudy’s estranged sister to get into the mental hospital. She and West (posed as her husband) find Rudy who is unable to really move or make eye contact but is able to say “wet” when he sees a picture of Rebecca who is tracking West’s whereabouts via his phone and which means she knows he’s at the ward. Also, Annalise has a face to face with Nate and really plays the hurting wife, scorned lover role well for the cameras.

Only two more episodes left and my nerves are all kinds of shot. I am not sure I can take next week.