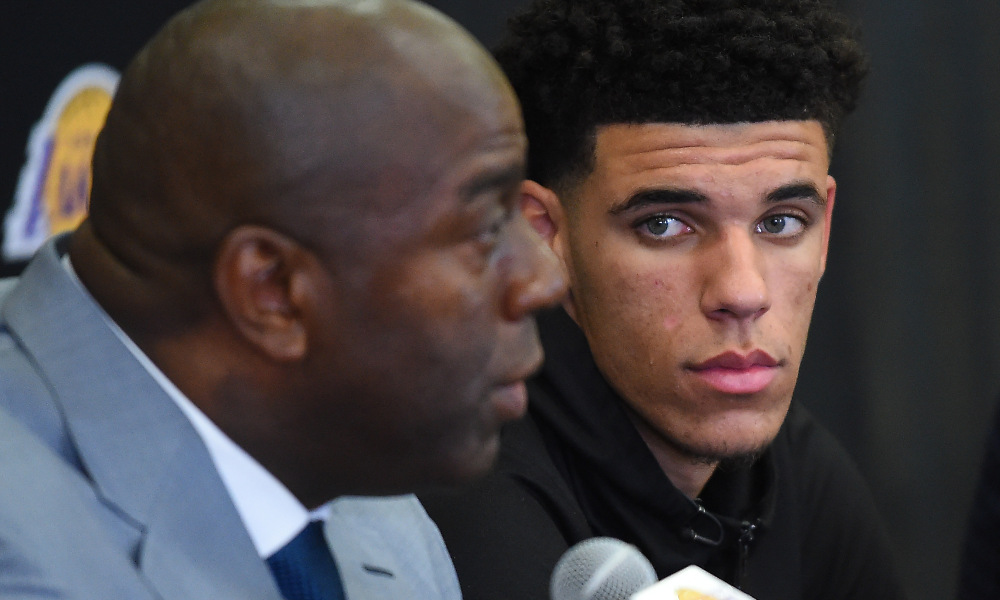 The NBA Summer League is a lot like NFL preseason football. It doesn’t give a great indication of how the rest of the year is going to play out.

With that being said, it’s hard to ignore what Lonzo Ball and the Los Angeles Lakers did on their way to the 2017 NBA Summer League Championship. The No. 2 overall pick in the 2017 NBA Draft turned into a triple-double machine after a terrible first game and ended the summer with MVP honors.

While LaVar Ball is off somewhere throwing a party, Magic Johnson got the first glance of what Lonzo can truly do for his Lakers team, and he enjoyed it thoroughly. Johnson believes that Ball’s success in Summer League will translate well into regular season success.

Magic went on to describe the glimmers of greatness he saw in Lonzo during the Summer League.

“Lonzo is special, no question about it because he makes everyone better,” said Magic. “He does something you can’t teach. He gives you a scoring pass. Very few point guards in this league can do that. I am talking about giving you a pass that leads to the score, not just passing it to you. I like him because he also is now a great teammate. He has a special effect on people.”

Magic even found a few points of similarity between his own game and Ball’s.

Basically, what Magic is getting at is that he believes Lonzo immediately makes the Lakers better (much like LaVar said on draft night), and he might not be wrong.

“We are already better. The roster is more balanced. We saw the ball movement in Summer League…We want to go up and down…Also, our practices are going to be amazing, and that will lead to us getting better in games. I tell you what; I would not want to miss a Lakers game this season. It’s going to be exciting every single night.”

The Lakers made some fantastic moves during the offseason (they, of course, have the added benefit of everyone wanting to play there). On top of drafting Lonzo and Kyle Kuzma, the Lakers landed former Detroit Pistons star Kentavious Caldwell-Pope on a one-year, $18 million deal.

Additionally, while the Lakers may have lost Nick Young to the Golden State Warriors, they were able to shop some of their young talent for pieces they needed, sending D’Angelo Russell off to the Brooklyn Nets in exchange for center Brook Lopez.

“Like five teams called for D’Angelo, we knew that we could move D’Angelo for one of the pieces that we were looking for. So we decided on Brooklyn. They got a great player in D’Angelo, and we got what we wanted.”

Poor Russell. He was stuck with the 26-56 Lakers last season, and right as they begin to improve, he gets shipped off to the worst team in the NBA.

Saying goodbye is never easy, of course, which is why Magic Johnson and general manager Rob Pelinka choose not to.

“I am not one of them dudes,” continued Johnson. “When I say bye, that’s it. I keep moving. I can’t get caught in emotions and all that. That is not who I am. We moved, and we kept moving. After that trade, we went on to the next thing. Both Rob and I, we put our heads down and kept moving.”

It’s clear that the Lakers have a lot going for them. On top of the actual assets that they have for this season, they have a very good chance of landing Paul George (assuming the Oklahoma City Thunder can’t upset the Warriors) during next offseason and possibly even LeBron James as he becomes fed up with the situation in Cleveland.

The Lakers are one of the most storied franchises in NBA history, so, much like the Boston Celtics, it doesn’t take long for them to bounce from the bottom of the league to the top.