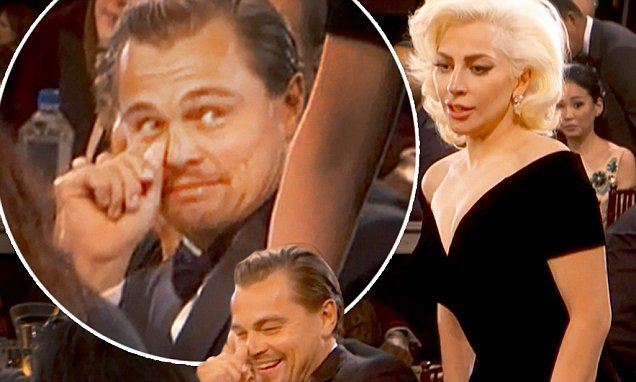 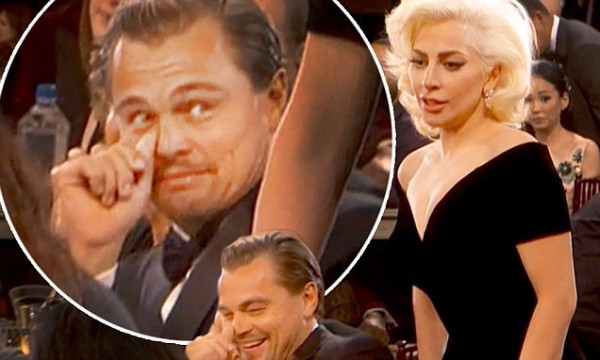 It’s never an award show unless something happens, no matter how trivial, that gets picked up all over the Twitterverse, and Sunday’s Golden Globes were no different as Leonardo Dicaprio and Lady Gaga got people debating on the rules of etiquette. With a cursory look at the video (which you can check out below), it looks like Leo was chatting/laughing at his table while Lady Gaga was navigating a tight walking area and placed her hand on his arm as she passed. If any of you have ever been to the Sundance Film Festival or a crowded even like this, you know that it’s not so easy walking around, and hand use can be a necessity.

Plus Gaga was on a nice high from winning in her first major acting gig in Ryan Murphy’s American Horror Story: Hotel, so she was obviously feeling many things. So investigate deeply and join the debate on who was wrong or if it’s just simply someone passing through a crowded area trying to get through without causing too much fuss. Well, that didn’t happen here.

On her way to pick up her a Best Actress Golden Globe for her performance in American Horror Story: Hotel, Lady Gaga bumped into Leonardo DiCaprio‘s elbow, apparently catching the Revenant star unawares.

DiCaprio’s shocked reaction (and his surprised/slightly terrified expression) has now hit the internet, via countless GIFs and Vines – and observers are hotly debating who, if anyone, was at fault.

Gaga fans have taken to Twitter to brand Leo “rude”, arguing that he should have been more aware of Gaga’s win, and the fact that she was making her way to the stage. Some especially outraged viewers have even suggested that the actor was “laughing” at Gaga’s win.

It's so sad to see how stars are even rude to others in their profession. Decaprio's expression as Lady Gaga touched him. #GoldenGlobes

But others are pointing out that the incident was clearly accidental – and that if anyone was rude, it was Gaga herself, for not stopping/acknowledging the collision. It’s even been suggested that Gaga deliberately “shoved” DiCaprio because he was “laughing” at her win.

Leo's reaction to Lady Gaga moving his arm was hilarious! She looked so rude walking by! #GoldenGlobes

DiCaprio himself has said that his reaction was completely unplanned.

“Oh lord – that’s trending, huh?” he later told ET Online backstage, when told that the video of the incident had gone viral. “I just didn’t know what was passing me – that’s all!”

Of course, his use of the word ‘what’ doesn’t help Leo’s case as he knew only people would be passing by him, not things.