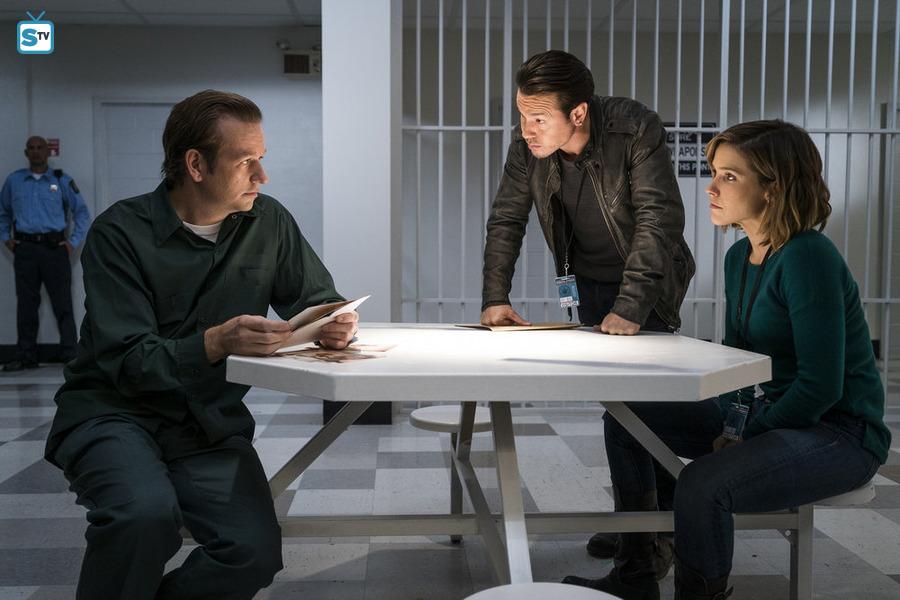 On this week’s episode of “Law & Order SVU,” a woman took a baked lasagna out of the oven and put a wad of money and a cell phone into a plastic storage bag. She then buried the bag in the lasagna. Benson consulted with a police department in Chicago over the remains of a runaway the NYPD found floating in the water that they suspected was a kidnapping victim from Chicago.

At a correctional facility in a cop questioned a prison inmate and showed him pictures of the deceased. The prisoner was Dr. Yates, whom the SVU had put away for murder. The female cop questioning him worked the case that put Dr. Yates in prison after he was found guilty. They suspected him of committing murders in Chicago before he was caught and imprisoned. Dr. Yates tried to get the Chicago PD to have Rollins work the case because he had dealt with Rollins before. He said if they got her to Chicago by the next day he would give them information on unsolved murders in Chicago.

The Chicago PD officers went to New York and talked to Rollins and Sonny about the case. They determined that a missing woman in Chicago was a patient of Dr. Yates before he went to prison.

The woman that baked the lasagna in the first scene of the episode was running a therapy session for prisoners in the Greenhaven prison where Dr. Yates resides. Rollins and Sonny went to the prison and met with Dr. Yates. She showed him a picture of a young girl the NYPD was looking for. After meeting with Dr. Yates, Sonny and Rollins had a video chat with Benson and the Chicago PD officers on the case. Dr. Yates had requested to be transferred to a less restrictive part of the prison. Rollins told them that Yates told her a former patient of his that they were now looking for had been working as a prostitute. Sonny and Rollins talked to a prison warden who was not going to allow Yates to transfer to what they call the Honor Block. By the time Sonny and Rollins were ready to go back to NYC, Yates had been moved to the Honor Black after all. Another patient in Honor Block, Carl, was going to have to live with Yates even though the two had a rivalry.

Benson and Barber, the DA, went to the prison to meet with Dr. Yates. An officer went to Yates’ cell, and he wasn’t there. Back at NY headquarters, Rollins told Sonny she was upset because Benson wouldn’t let her go back to Greenhaven. She also said that she hates being coddled now that she is a new mother. At the Greenhaven Prison, Benson noticed Drones flying above the prison yard. Drugs and a phone fell out of one of the drones and landed in the prison yard. Inside, police confronted Yates’ prison cellmate, Jose, concerning the whereabouts of Dr. Yates but he told them he didn’t know anything.

A code blue was called when it was determined that Dr. Yates and Carl escaped through a hole in Carl’s cell. Then Jose told the police that Yates and Carl had been plotting their escape. Inside the prison, they found a pipe that was turned off and had a way for prisoners to get out. Near the prison, a dead body was found. The warden then implied to Benson that Rollins had helped Yates escape. Another dead body was found, and both of the deceased were electric workers. Their deaths were reported on the news and Yates, and Carl were named as suspects in their murders.

The FBI was dispatched to help find Carl and Yates. Benson and Rollins questioned Jose about Yates and Carl. He told them there was contraband in the lasagna brought into the prison. Sonny found out that the lasagna made it through security into the prison even though it had contraband in it. Benson and Rollins realized the prison’s therapist had previously worked at Rikers Island and helped a prisoner escape from it. Sonny and a team of other cops broke the woman’s door down and pointed a gun at her husband. He told them she had taken his car to go attend to a family emergency, and they forced him to give them the license plate number. In a dumpster near the car, Sonny found the prisoner jumpsuits Carl and Yates were wearing. In another car near the dumpster, they found the woman restrained in the trunk of the car. They took her in for questioning, and she said she did not know Carl to be a murderer. Barber told her she would be charged with a felony unless she told them all of the plans Carl and Yates had made. She said Carl and Yates made her take her husband’s gun to give to them, and she did it because she was scared for her life.

New York State Troopers, along with the SVU, found in a boat by the lake, Carl bleeding profusely. At the hospital, Sonny told Carl to tell him what Carl and Yates had been planning. Meanwhile, a trooper was found dead, and the cops that found him were then shot at. In a cabin, the female cop found a little girl and then heard a gunshot outside.