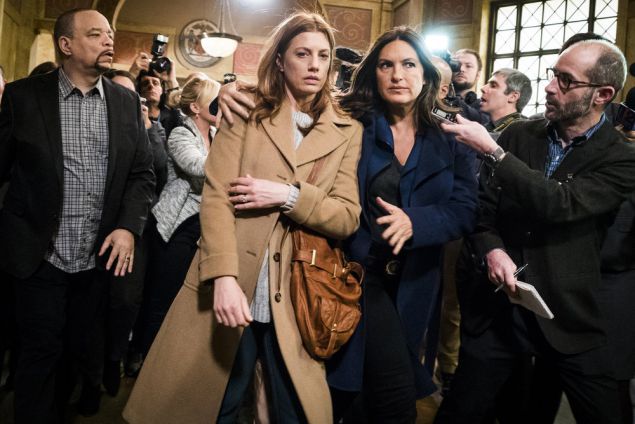 On this week’s episode of “Law & Order: SVU,” the opening scene begins at a party where the guests discussed how expensive living is in New York. The team was doing secret surveillance on the party, which was for local elected officials. A woman at the party tried to get off a man’s lap to use the restroom, but it caused a scuffle between a party guest and Sonny, who was working undercover. Then the NYPD came in and arrested the man. They were told they had just derailed a two-year law enforcement investigation.

At the station, Benson said no one would admit who organized the party. One of the attendees was a nun named Nina and Benson asked her why she had been at a sex party. She said she wasn’t comfortable with a female cop because she was actually a transgendered man trying to infiltrate the party. Benson said the pimps that organized the sex parties wouldn’t admit to anything they did. Captain Gerbic came to the police station to talk to Benson about covers being blown. Benson told him an anonymous tip led them to the party She told him SVU could handle the case better than his team could but he disagreed.

Benson went to a halfway house to talk to the nun in charge about the women being used for sex trafficking at the party. She asked about a woman staying at the house who said the UC cops investigating the case were secretly sleeping with the women. Benson and Rollins talked to Cara, one of the girls from the party and asked her to explain what the cops had done to her and other girls. She told Benson they were forced to perform oral sex. She also said they forced her into a room and took turns raping her. Benson asked her who took the girls to these parties, but she didn’t get an answer to her question.

Captain Tucker told Benson he was going to talk to his priest cousin Eugene. He told Eugene two of his pastoral students had been picked up at the party. Then it came out that Cara had dropped out of school six months ago and had been on drugs. Eugene wouldn’t talk about the case and neither would his boss. He said Sister Nina had gone on medical leave for psychiatric reasons, and she shouldn’t be around these young women.

Benson told Barba Cara was too scared to testify in the case. At the halfway Cara was found dead in her bed from a heroin overdose. The medical examiner said that Cara died in her sleep, but she didn’t know if the overdose was intentional. Sister Nina told Benson she was afraid she would be the next one killed, and Benson said she knew where to take her so she would be safe. Father Anikola was named as a person of interest in the case. Rollins and Sonny asked him about Cara’s death, and he said he regretted having left her alone at the halfway house. He offered to talk to the other girls to see what they knew and said they might be more willing to talk now that Cara was dead.

Captain Tucker went back to Eugene and accused him of working for the cops that raped the young women, but he said he didn’t work for them and that he was just Cara’s counselor. Benson asked him how well he knew Father Anikola and all he said was that he was a good priest. Tucker then accused Eugene of having been involved in the case. Tucker said he wanted a warrant to search Eugene’s belongings for proof he was trafficking the young women.

Sister Nina was staying at Benson’s apartment, watching her baby son Noah. Benson asked Sister Nina about the guidance counselors, and Tucker asked her if they should talk to Father Eugene. Sister Nina said that Tucker needed to get out of there. Once he left, Benson told Sister Nina to give Noah back to her. Benson left the room and took Noah with her. A minute later she came back in the room alone and found Sister Nina packing to leave. She was upset that Tucker was in charge of the case since he was Eugene’s cousin. Sister Nina accused Benson of bringing her to her place to kill her.

Dodds and Benson went to see Barba and ran into another of Cara’s priests. He told Barba they thought several of the priests were involved in the death of Cara. Barba told Benson he suspected Tucker was involved in illegal activity. Allegations were made by one of the priests against Tucker. Benson said the case was about protecting Father Eugen, and Barba asked Benson if she and Tucker were romantically involved. She denied it, but he could see right through her. Benson kept telling Barba he was wrong about Tucker.

Benson met privately with Tucker to tell him he was being investigated for corruption. He told her not to stick her neck out because it would look like she was covering for him and he was going to be fine. Benson was then called to One PP on an urgent matter. Dodds was made acting commander of SVU because someone had reported that Benson and Tucker were romantically involved.