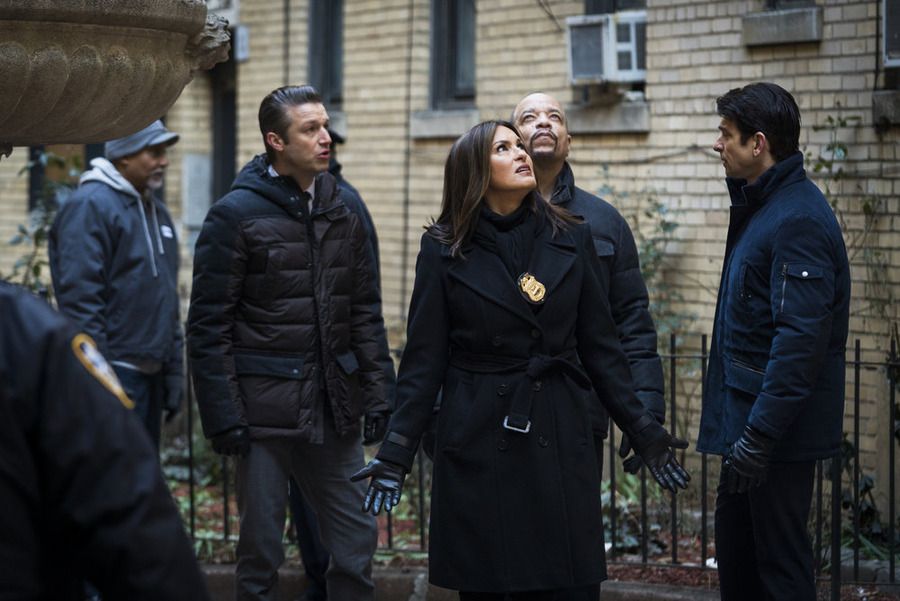 On this week’s episode of “Law & Order: SVU,” Rollins overhead a man speaking on his cell phone and threatening to toss someone out the window. In a diner down the street, a woman was drugged and laying in a chair when two adult men and a young man approached her and tried to push themselves on her. Since she was too weak to fight back, they carried her out of the restaurant. As they left the restaurant carrying the woman a passerby saw what they were doing and one of the men stopped and told her their friend had just been partying too hard.

They tried to enter an apartment that wasn’t theirs, but the neighbor across the hall scared them off. Outside of her building the woman regained consciousness and tried to fight off the men. Several people saw this take place through their apartment windows, but everyone turned off their lights and went to bed without calling 911 or offering the woman help. The next morning paramedics took the woman to the hospital because she had been out in the cold all night and was suffering from hypothermia.

They determined the woman’s name was Libby, and the doctor told Rollins that Libby’s ribs were cracked, and she had a concussion. In her apartment Finn said there were no signs of robbery. The neighbor that had chased the men away the night before went into Libby’s apartment to ask Finn if she was OK. Sonny asked another of Libby’s neighbors if she saw anything and the woman said she saw two men in hoodies in the courtyard of the apartment building. When Sonny asked her why she hadn’t called the police, she said she assumed someone else had. Sonny then went to the diner Libby had been at when the men grabbed her and talked to an employee and the customers, but no one would admit they had seen anything the night before. He did obtain video footage from the tablet of a woman that had been in the diner when the incident happened. Benson told him to send the video to every TV station in the city.

After seeing the video on the news, one woman at a Youth Center identified the three men as Ronnie, Juan and William. She had been holding them in the game room of the Youth Center until police arrived, but when Rollins entered the room all three men were gone. Finn and Sonny caught up with Will and questioned him about Libby’s rape. Finn asked Will where Ronnie and Juan were, and he said he didn’t know.

When Libby woke up in the hospital, Benson said they found her unconscious in her courtyard and asked Libby if she knew how she got there. She said she remembered feeling the pavement on her back and had felt like she was floating outside of her body. Libby said she had a few drinks the night she was raped and that after those drinks she had gone to the diner to get a cup of coffee so she could sober up. She told Benson she took Special K and she had been stupid. Benson said there wasn’t much on the videos and nothing in the rape kit that would point them toward the rapist, so they were going to have to talk to the neighbors again.

Sonny, Benson and Rollins took to the streets of Brooklyn to find the drug dealers that had provided Libby with drugs. This led them to finding Ronnie and Juan, who fled when they saw Sonny approaching them. Sonny, Benson and Rollins caught and arrested Sonny and Juan. Sonny sarcastically thanked the people that watched the arrest and took pictures.

At the station Finn and Rollins questioned Juan and Sonny questioned Ronnie. Ronnie said witnesses that said they saw him near the building the night of the rape were bluffing. Benson told Will his friends gave him up and asked Will to tell her his side of the story. Will denied doing anything wrong or hurting Libby.

The team showed Libby’s neighbors pictures of the three men and asked each neighbor if they had seen any of them that night. An attorney representing the Youth Center came to the courthouse to defend Will in court. He said if the guilty party needed to walk so Will could walk too, so be it. The DA’s office had a cell phone that belonged to one of the witnesses and they wanted to use that phone as leverage to get answers from the witness. The witness in question had a black eye and Benson asked her how she got it. Benson told the woman she did the right thing by calling 911 but she needed to tell the police what she saw. She said once she called 911 the black boy hit her and said he would kill her. In a lineup she identified the black boy that threatened murder and the boy’s two accomplices. The woman identified Ronnie as the one who hit her for calling 911 and Ronnie’s lawyer said Ronnie was afraid to tell police what really happened. Ronnie claimed Libby said she wanted all three men the night of the rape and that she wanted rough sex.

At Libby’s apartment Sonny told her it was good the jury heard her side of the story. Then her neighbor, Doug, stopped by to check on Libby. When he saw Sonny and Rollins he told Libby he’d come back later. After he left, Libby said she met the man in AA meetings they both attended. Sonny excused himself from Libby’s apartment to talk to Doug. Sonny said that previously Doug had lied to him by saying he was at a bar with his boyfriend the night of the rape. Yet Libby had just told Sonny and Rollins that Doug was in AA meetings, and they were both single, so Sonny had caught Doug in a lie. Sonny told Doug he had to testify in Libby’s case or the case would be over.

The next day Doug showed up to give his testimony but admitted he had been drinking. Benson asked the DA if they could get Doug’s testimony postponed and Sonny took him to get a cup of coffee to sober him up.

On the stand, Doug identified Ronnie and Juan in the courtyard and said they forced themselves into Libby. Doug said he saw Will holding Libby down while Ronnie and Juan raped her. Ronnie and Juan’s lawyer got Doug to admit he was drunk at that moment. The DA then asked Doug to remember the questions Ronnie’s lawyer had just asked him. Doug rattled off the questions asked, and then the DA asked Doug if he remembered what the three men were wearing the night of the incident, and he described their outfits. He then asked Doug to turn away from the jury and then describe them and he did.

The judge asked the jury for their verdict. All three men were found guilty of criminal sexual acts in the first degree.