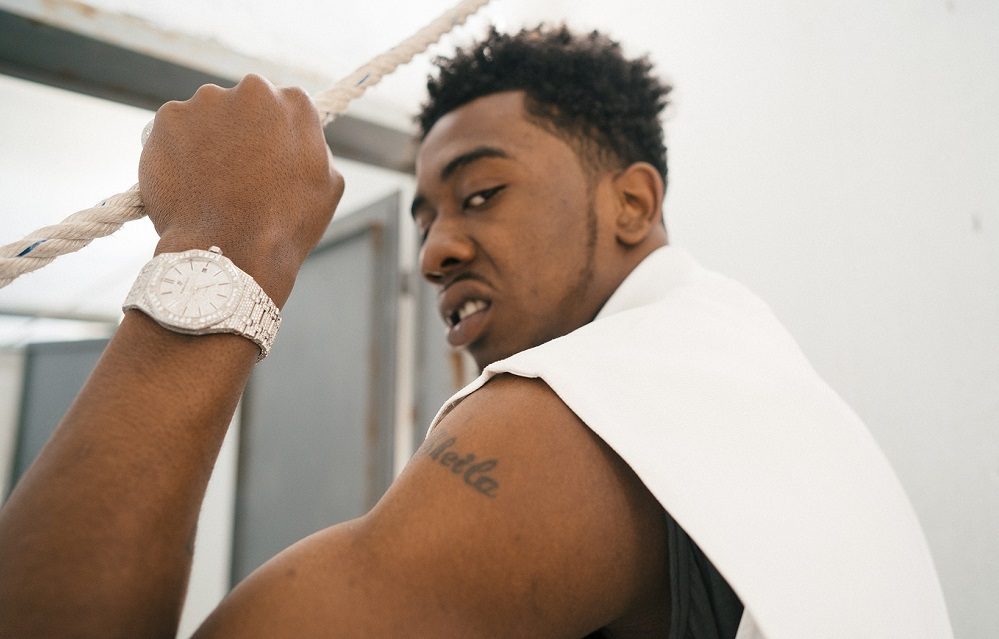 As we just recently reported, rapper Kanye West announced that he signed up-and-coming rapper Desiigner to his record label, G.O.O.D. While Kanye may be a controversial star; there is no denying his talent and success when it comes to his music. So the fact that 19-year-old Desiigner was able to land himself a spot on Kanye’s label is undeniably a pretty big accomplishment.

Unfortunately, while Desiigner’s rap career is looking up, things aren’t looking so good in his personal life. On Thursday night, Desiigner was arrested after police were called to a traffic dispute (that the rapper was involved in) near the Lincoln Tunnel in New York. According to reports, a caller informed NY police that an SUV (in which Desiigner and 4 other people were driving in) had flashed firearms at another vehicle after some on-road conflict.

When the police located the SUV in question and pulled it over, they discovered loose prescription drugs, marijuana and a gun.

On Friday morning it was confirmed that Desiigner had not posted bail. In addition, the “Panda” rapper was scheduled to appear in court later in the day on Friday. 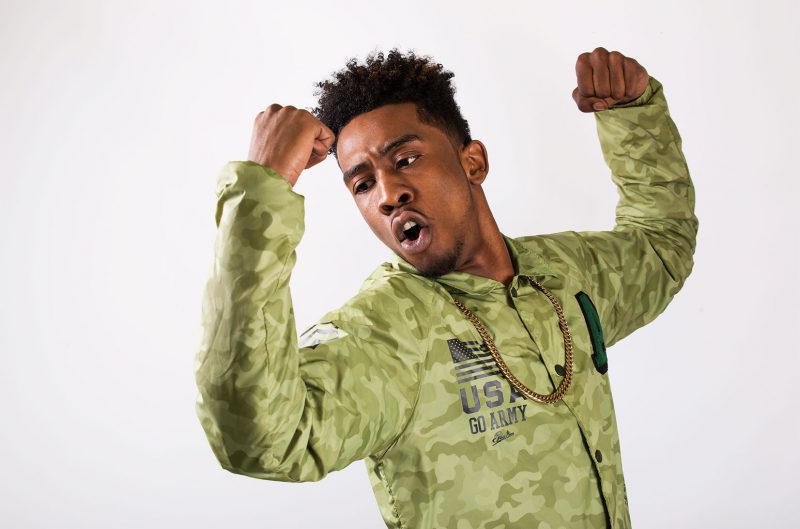 UPDATE: Desiigner exited a New York jail without bail Saturday, a day after the “Panda” rapper was arrested on felony weapons and drugs charges. However, upon investigation, the felonies against Desiigner were dropped, and the rapper was arraigned on just misdemeanor drug possession and menacing charges.

Both charges stem from an incident Thursday night where Desiigner, three associates and their hired driver were involved in a road rage altercation with another vehicle in New York. The occupants of the other vehicle called police, asserting that Desiigner pointed a weapon at them. Soon after, authorities caught up with Desiigner’s chauffeured SUV and arrested everyone in the vehicle.

Because Desiigner was alleged to have pointed a “black firearm” at the other vehicle, the rapper faced additional charges of criminal possession of a loaded weapon, a felony, and menacing. However, the police’s search of the vehicle uncovered no guns, and on Saturday, the felony weapons charge against Desiigner was dropped.

“It’s dangerous to say that just because there were four black men in a car they had guns and drugs,” Ian Niles, the lawyer for Desiigner’s three associates, told the judge overseeing the case at arraignment, the New York Daily News reports. “Who that was who reported needs to be figured out.”

An initial inspection of the vehicle yielded a large amount of drugs, including OxyContin and anabolic steroids, which resulted in all five occupants being charged with felony criminal possession of a controlled substance.

However, as the New York Daily News reports, the investigation later determined that the large cache of drugs found in the car’s center console belonged to the SUV driver, Scott Siegel, who is being held on $5,000 bail on felony criminal possession of a controlled substance as well as forgery for carrying two falsified active-duty firefighter plaques.

Because Desiigner and his three associates – Utril Rhaburn, Scott Siegel, C.J. McCoy and Desiigner’s hypeman Michael Davis – were in possession of marijuana, the four were charged with misdemeanor drug charges, and the felony drug charges against them dropped.

The New York assistant district attorney argued that more charges against Desiigner could be forthcoming if more evidence emerges regarding ownership of the drugs found in the SUV. 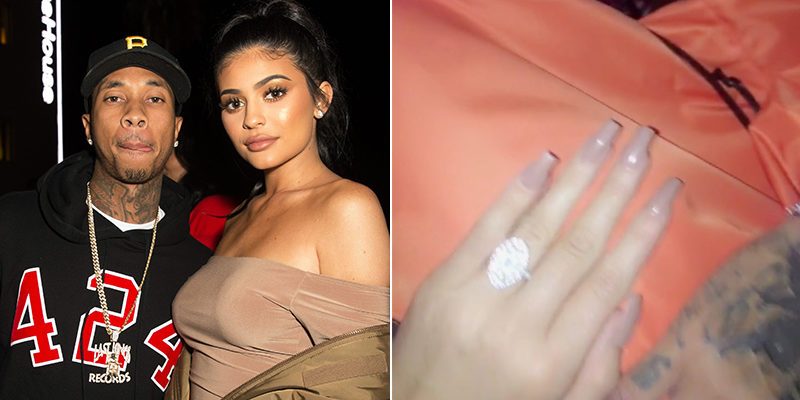 While they haven’t always been blissfully in love, young couple Kylie Jenner and Tyga has seemingly gotten through their brief rough patch. In early 2016, Kylie and Tyga decided to call it quits and were each spotted out-and-about with other people. However, they eventually ended up getting back together after just a few short weeks. Since this little blip in their relatively long-term relationship, the two have been pretty much inseparable.

Proving that there is nothing but love between her and Tyga, Kylie took to her Snapchat to show off her latest piece of bling. Late on Thursday, the young reality star showed off a big sparkly ring in a short video. Kylie playfully captioned the video, “If this is my promise ring I wanna know what my engagement ring gonna look like.”

Kylie shot the video while driving to a Nylon magazine event with Tyga in New York City. Afterwards, the duo joined some friends (including Jordyn Wood and Scott Disick) at 1Oak nightclub. While at the club, Tyga performed a few of his rap songs on stage, while Kylie lovingly sang along and hung out right next to the stage.

In addition to having fun together, Kylie and Tyga are slated to join forces for an upcoming venture. Fashion designer Alexander Wang just revealed that both stars would be part of his 2016 fall fashion campaign “Wang Squad.” On his secondary Instagram account, Alexander posted pictures of the two stars, with the hashtag “#WANGF16”. Kylie and Tyga join a long list of young celebrities that Alexander Wang recruited, including: Skrillex, Tinashe, Big Sean and Zoe Kravitz. 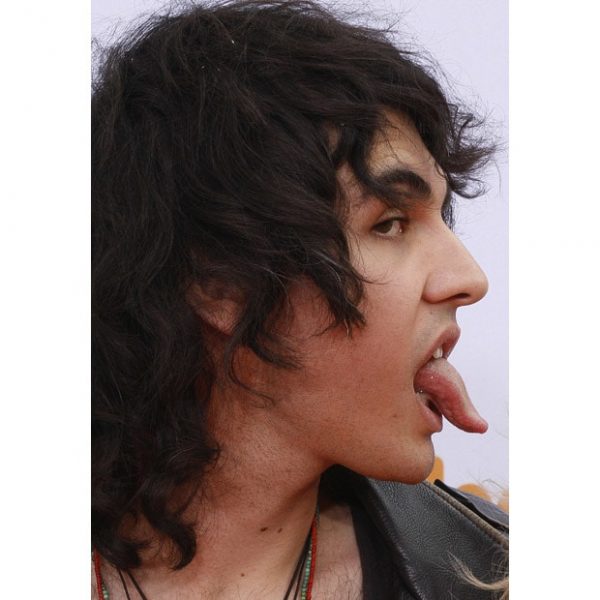 It looks like Gene Simmon’s son is following in his Kiss dad’s shoes as word from Nick Simmons is that he’s starting a band.

“We just picked a name,” he said. “It’s brand-new. I found a bunch of good guys. You’ll see something soon. It’s eclectic. I wouldn’t say it’s ‘rock.’ I always loved blues, and it has some blues roots. Whatever the hell Beck is, it’s probably like that.” 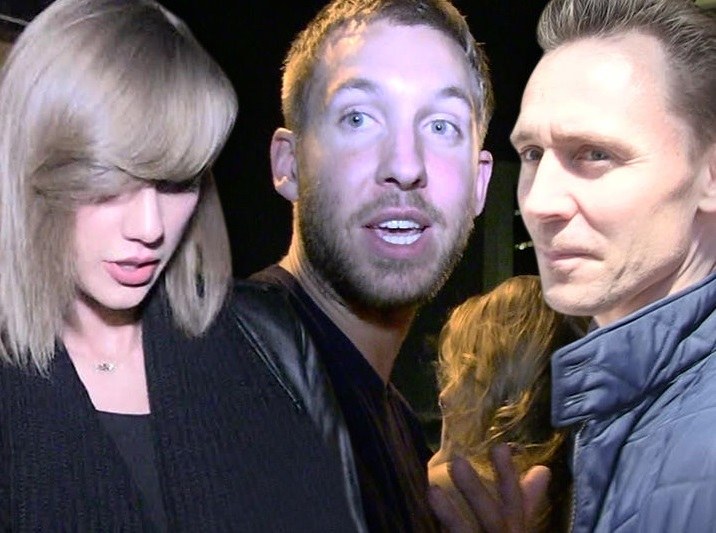 We called it; Taylor Swift is already back in the studio working hard on her next album which is sure to include Calvin Harris and Tom Hiddleston. In less than a week after her latest public breakup, she’s back with pen to paper dipped in blood.

“She’s obviously such a great friend, and you know she is starting to go back to work in the studio again, and really made time to be here for me.” the model said. “And I am so grateful for that.

Serial dater Swift, 26, likely has plenty to write about after a summer full of failed romance.

Swift most recently separated from her British boyfriend of three months, Hiddleston, on Sept. 6. According to Us Weekly, a source revealed that Swift ended things because “Tom wanted the relationship to be more public than she was comfortable with. Taylor knew the backlash that comes with public displays of affection, but Tom didn’t listen to her concerns when she brought them up.”

Swift’s romance with Hiddleston began after her split from Scottish DJ Calvin Harris in early June. Since the split, Harris has repeatedly called Swift and her p.r. camp out via social media for making him out to be the villain.

But Swift appears not to be too shaken by his public shaming, as she was spotted singing to Harris’ summer hit “This Is What You Came For,” during the encore at the Tommy Hilfiger show in an Instagram video she posted Friday night.

Swift co-wrote the song with Harris and contributed to the vocals. 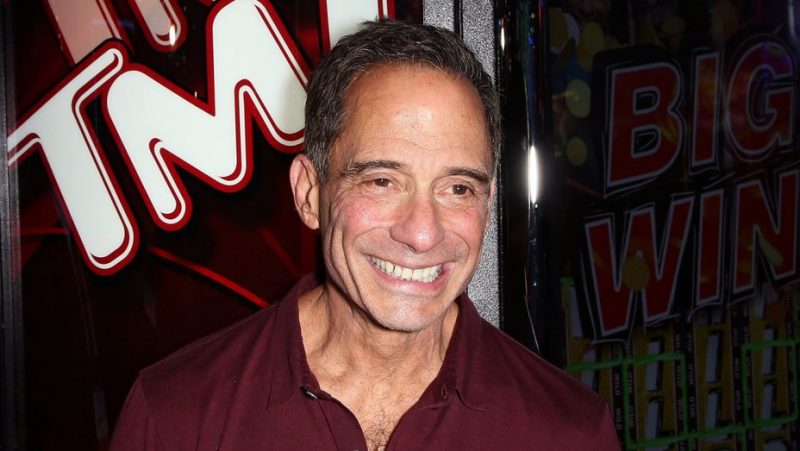 According to “sources,” TMZ is the latest news site forced to downsize, but according to TMZ, that’s not the case. At the beginning of September

At the beginning of September, TMZ spin-off site, Fishwrapper was shut down and let go of the staff. If you guy to the site now, it takes you directly to TooFab.com. Recently, huge sites like Examiner have been forced to shut down due to fewer income streams coming in but Time Warner is saying:

“We made the decision to use Fishwrapper resources to expand [another spinoff site] TooFab.com, which is a growing business for TMZ.”

They didn’t respond to questions about employee layoffs but pushed another aspect with the TMZ slot machines in Las Vegas. At least they’re working the licensing aspect as many new sites are seeing, advertising dollars aren’t as lucrative as many still think on the internet.