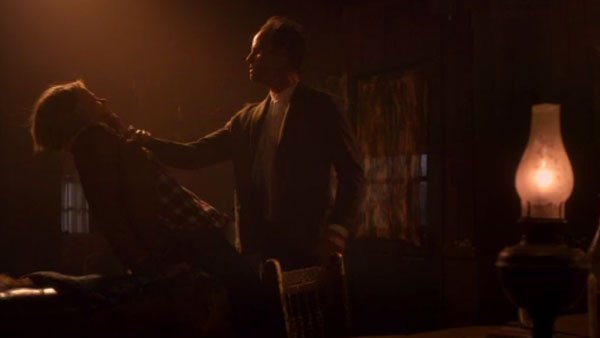 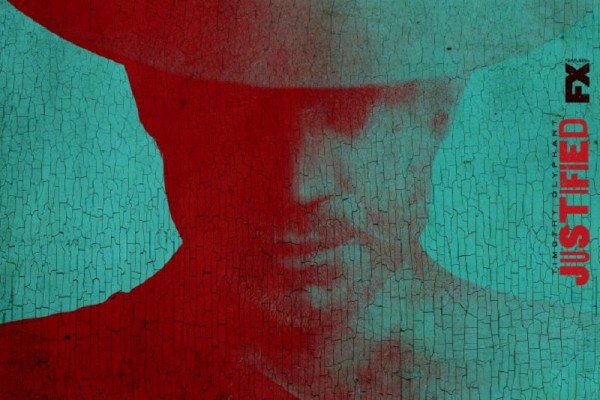 The twisted happenings of Harlan continued this week on Justified with the Marshals on the hunt for Ty Walker who was shot during the shootout involving a whore, a Choo-Choo, and the Raylan Tim combo. Surprisingly Raylan tells Rachel that he will take that 24 hours off to recover from the dramatic event as she suggested. She knows this is a lie since a shootout is to Raylan Givens like a weekly trip to the dry cleaners. She goes along with it though. I’m sure she assumed he was just going on a solo mission to clean up this mess.

Walker’s beard is quite raggedy now that he’s been in Harlan a few weeks and the fact that he has a bullet embedded in him isn’t helping either. He makes a call to his buddy Seabass and boss Markham for help. Says he needs an extraction. He knows Markham will abandon him just like they did Choo-Choo so he makes sure Seabass is in on the conference call. Would have been wiser to keep Markham out of it altogether. Seabass takes some cash from Markham and is advised to stay out of the mess and lay low. 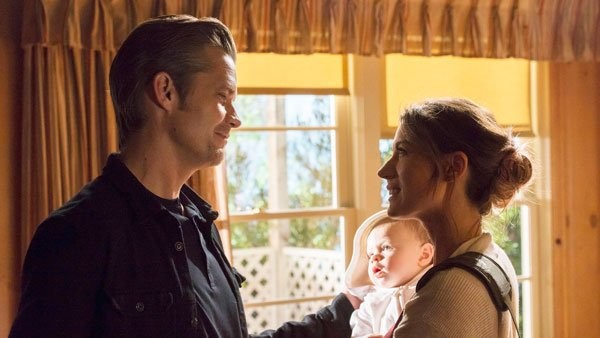 Boyd wants to take Ava up to his daddy’s old cabin and he “ain’t asking.” She knows something is up but has no choice. We also see the reason Raylan sidestepped the manhunt. Winona is in town with demon child in tow, her words not mine. Kid is quite a screamer.

The mine scenes seem pretty irrelevant at this point. Vengeful Zachariah looks like he may shove Carl down the hole like he did the other henchman. Carl wants to tell Boyd about their man’s death immediately, but Zachariah tries to talk him out of that. Boyd would likely sniff the old drunk out as the culprit.

Winona is in town to tell Raylan about the baby’s heart murmur, which may or may not be a big deal. She also wants to discuss joint custody with the Marshal. 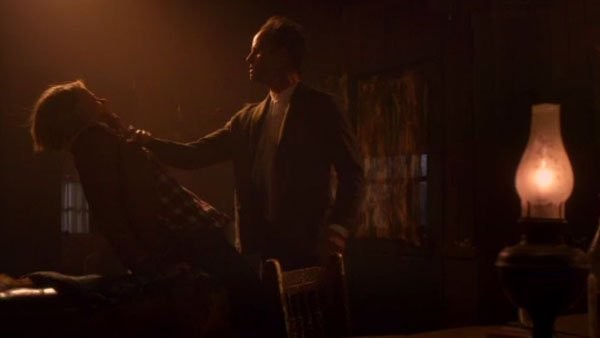 The cabin scene with Ava and Boyd was tense. She is afraid and tells Boyd about how Bowman used to beat her up and promise not to do it again. Boyd asks her innocently, “Have I ever done anything to you?” It was a profound moment. He has gotten her into some deep trouble with the law, but he has treated her well overall. His biggest fault was being unable to get her released from prison. Had he been successful, they would not be in this precarious position now.

Ty Walker proves his toughness as he cuts out the bullet that’s lodged in his shoulder. He does this in a public bathroom, so I’m sure he will die of a nasty infection if the Marshals Service doesn’t get him first. He sends two young guys on a spending spree with his credit cards on their way to Disney World as he wants them to deliver a war memento to his buddy from the military. This is simply a ploy to lead the lawmen on a wild goose chase. Nice try.

Art hits up Markham for some old info on the Hale case. He is still interested in who the rat was when all the Grady Hale stuff came to a head. Either the reveal of the rat / murderer at the end of the season must be going to end up a big shock or all this Hale talk has been a huge waste of time.

Boyd and Ava are on a stroll / pig hunt and he may be the greatest hunter in Kentucky. No camo, no dogs, and has a pretty blond with him. I don’t think that’s how hunting usually goes. Boyd is a stickler for wild game rules as he waited for the opening day to hunt the wild boars. He may murder Ava, but killing a pig out of season would be beneath the man.

Winona got some decent sleep while Raylan was babysitting. She seems comfortable with his job and tells him just that. She’d rather worry about him every night than to know for certain he is never coming home to her because they aren’t together. She says, “You can be with me and still be you.” Pretty good deal in my mind, but that doesn’t include kissing informants like Ava.

Walker ended up shooting a couple of EMT workers who tried to be heroes. They knew he was on the run and tried to trick him which caused their families to be eating supper alone that night. Walker is a desperate man and told the skinny EMT guy that he would just tie him up and let him live but, “It’s been such a day.”

Boyd is enjoying some fresh pork  by the fire with blood still on his hands. The truth is about to come out in an ugly way and he presses the issue. Ava finally confesses to being a snitch and selling Crowder out to Givens. The only saving grace is her point about him leaving her in jail. She had no choice and he would have done the same in that scenario. Boyd is pissed but seems more concerned about whether she is sleeping with Raylan. He hands over the pistol and tells her to pop a cap in his dome if that’s the case. She says that’s not true and hands the gun back. He tells her that he will get them out of this mess if she will just trust him and she agrees. He wasn’t able to free her from prison so I’m not betting on Mr. Crowder. The gun handing over was just a test for Ava as there were no bullets. Boyd is about self preservation first and foremost. Ava is still alive because she didn’t pull the trigger only to hear a click.

Winona and the little one are headed out of town and Raylan says they will give it a shot together. Whether that be in Harlan or Miami is yet to be determined. The Marshal wants that life, but he will always be chasing something or someone else at the same time.

Is it possible that both couples, Givens with Winona, and Crowder with Ava, can ride off into the sunset happily? I doubt it, but it would be OK with me if that happened. Boyd’s not a totally evil character though the writers are making him a darker character this season. I wouldn’t mind seeing him get away and Raylan giving up that chase for Ava’s sake and his own freedom to get to Winona and his daughter.