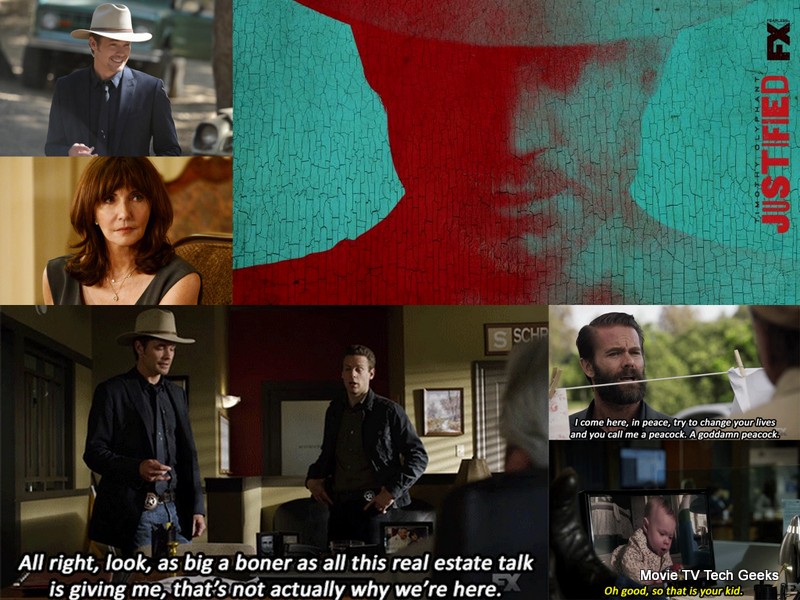 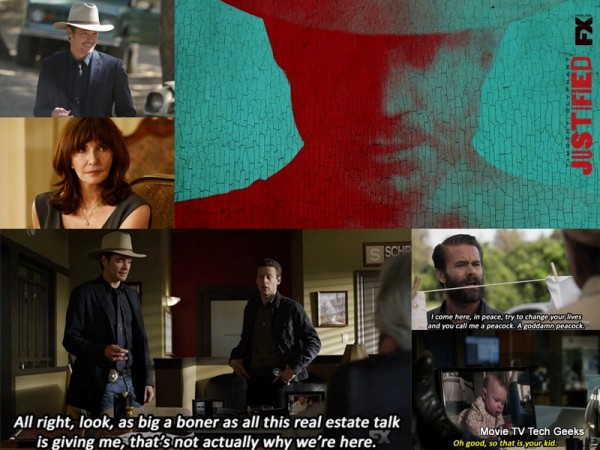 Here’s what we got on last night’s episode of Justified, called Cash Game. We got more attempts at a land grab in Harlan and got introduced to a new dummy named Choo-Choo. There was also more tension between Ava and Boyd as we get to wonder each week whether she will end up a bloody mess like Dewey Crowe.

The episode starts out with Boyd rambling around in Ava’s barn. She wakes up and heads out to see what the hell is going on her property, pistol in hand. He gives her a line about some painting, but she knows better. Before he leaves, she does try to make a move closer to her “fiancé” by asking about this beach destination he mentioned before. He lets her know that he is willing to go anywhere as long it is with her. The career criminal really does love her, but we will see how far that love goes in the coming weeks. Boyd leaves and Ava finds some papers in a folder left by Boyd among some clutter.

The bearded land baron, Ty Walker, is doing his thing again this week. This time he tries to buy a little farm from some older folks who have already heard about him. They politely refuse his offer and then call the man a peacock after he overstays his welcome. Pretty good insult that you don’t hear everyday. That didn’t sit too well with the Mercedes driving peacock, and I think the old folks will regret not selling out to the man. 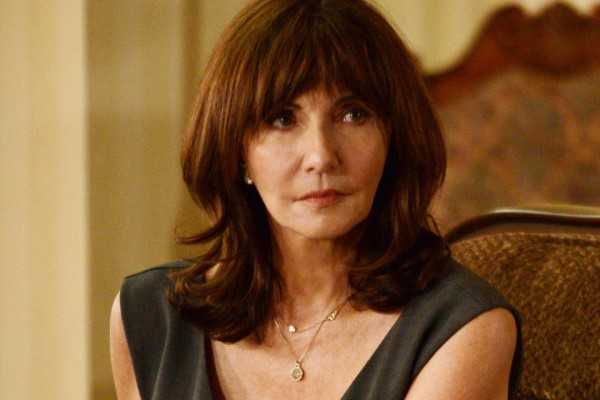 It turns out that Boyd had no idea what he was grabbing from the bank robbery. Wynn Duffy and Katherine Hale meet with him to discuss it all. Hale basically accuses Boyd of hiding the three million that was supposed to be in the boxes he took. She refuses to pour the man any coffee also and I’m not sure which Boyd was more offended by. After Boyd leaves the little meeting, Hale and Duffy talk about their suspicions concerning Ava and how she mysteriously got out of prison. Ava is the most endangered character so far this year. I hate to see a good looking blond leave any show or room for that matter. But Ms. Ava is going to be targeted each week I am afraid.

Ty Walker meets with a local real estate salesman named Calhoun. The real estate guy seems to your typical real life real estate agent, slimy and untrustworthy. Walker sends one of his top men to follow Raylan and Tim. That turns into a comical disaster as his goon, Choo-Choo, gets carjacked by Raylan. Before taking Choo-Choo’s car he makes fun of the giant man having to drive such a tiny vehicle. Walker’s crew is none too bright and will be no match for the Marshals. They are there as a distraction for the main battle between Boyd and Raylan.

Sam Elliot makes a brief appearance this week with Katherine Hale in his bed. He is cast as Markham who is of course a pot baron. He and his lady partake of the hippie lettuce while they discuss some plans. No idea why Elliot let the mustache go when on the most appropriate show for such facial hair.

The shady real estate guy Calhoun gets a call from Boyd saying that he just happened to find a ledger and other papers belonging to the man. Of course these items were ripped from the bank. Boyd wants some cash in return for these important papers and Calhoun agrees to meet him later. Mr. Calhoun was being threatened at the time by the peacock, Ty Walker. I put the over and under odds on Calhoun living, at three more episodes. I liked this guy’s work as “Buddy” on Friday Night Lights and would love to see him get more screen time. 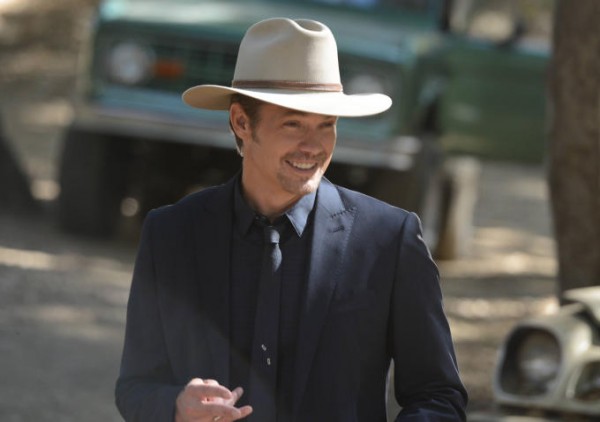 Ava meets up with Raylan to show him the folder and papers that she found in her barn. He is not greatly impressed and makes her paranoid by making it seem like Boyd planted them as a test. She is in a tough spot. He presses her for intel, but when she gets it, he tells her to just put it back. Clearly she is in danger and should leave that miserable town. There has got to be a better place to live than Harlan for a lady like Ava. Somewhere in the USA there is an 80 year old legit businessman just begging for a hot blond to marry him and collect the inheritance as soon as he croaks.

Choo-Choo’s exploits continued as he takes a ride from Tim after the Raylan carjacking. Mr. Choo lets the Deputy Marshal drive him back to his hillbilly den as he and Tim bond over war stories. It’s not too hard to outsmart this little gang apparently. Some viewers may be put off by these dumb criminals up against the slick Givens, but that is the way the show has gone for all six seasons. The underlings have never been that smart. There is usually a wily redneck leader to guide the dummies.

Raylan finds out all the info he needs about the bank robbery when he barges in on Calhoun who is dicktating to his “assistant.” He doesn’t want to talk, but his “assistant” lets Raylan know what the real estate agent has been up to with some big time criminals.

Ava’s fears come to a head when she comes home from a hard day of eyebrow and bikini waxes at the beauty parlor. Boyd awaits her on the front steps. She makes a nice move as she goes on the offensive, telling him how he put her in danger of going back to jail by leaving those papers on her property. She sells it nicely and Boyd appears to buy it enough to be plausible. If she had been a rat, why would she have the papers still? Maybe Boyd has not heard about copy machines. He has been really busy blowing up shit and scheming for a few years now.

Boyd’s meeting with Calhoun never happens. Raylan is awaiting Crowder at the real estate office instead. Boyd coolly tells the Marshal that he is simply returning some papers he found on the roadside. A mini showdown ensues, but Boyd knows it is useless to oppose Raylan face to face. Givens is known to just haul people to jail for any reason…or shoot them, whichever is easier at the time. Boyd gives up the papers and heads back to his bar.

Ty Walker keeps on harassing the local population. This time he shows up at the unlucky bank manager’s home. He wants info on the possible robbery suspects. She resists but finally tells him that the police kept mentioning Boyd Crowder as a suspect. This is bad news for Walker, not Boyd. The peacock is in danger, not the smartest criminal on the show.

One of Boyd’s henchman picks up a necklace from the bar floor and hangs it up. As I said before, lots of dumb goons that are led by one smart criminal. Ava shows up to see Boyd and walks into his office looking sharp. He is not super happy to see her, but is impressed when she tells him of the one deed in the folder that stood out. Apparently it has something to do with the pizza joint occupied by Walker’s crew. It was a bank at one point as Raylan reveals at the end of the episode.

The last scene shows Raylan and Tim showing up at the pizza place to talk with Walker and meet his boss. Raylan is really good at insulting people as he tells the Walker goons that their boss can’t be the head man since he has been going door to door. The gunslinger basically calls Walker an Avon salesman, then he and Tim head off.

This season is going to come down to a showdown with Raylan and Boyd. That’s what is promised in all the previews. The Walker crew is a sideshow, but Sam Elliot’s character, Markham, should lend some legitimacy to them eventually. If I had to guess, I would say Ava gets whacked with about three episodes to go. That would leave three shows for some real bloody action. I am guessing that Boyd would blame Raylan for her demise in some way, even though Boyd has led her down this road with dreams of living a lifestyle of the rich and infamous.