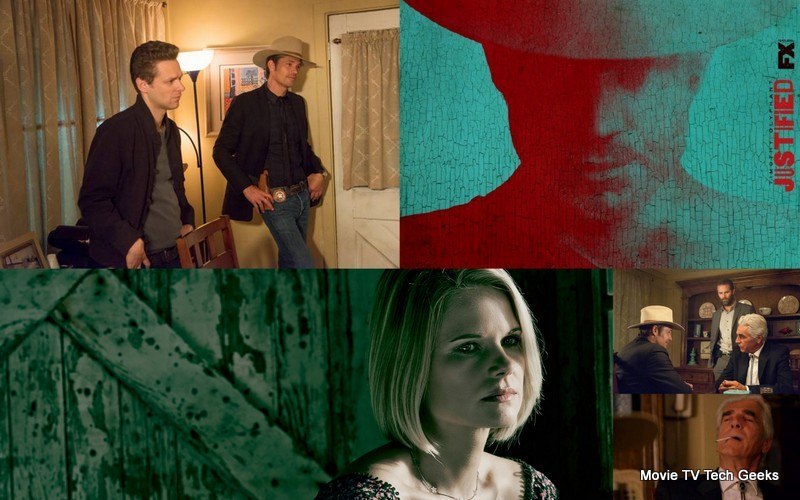 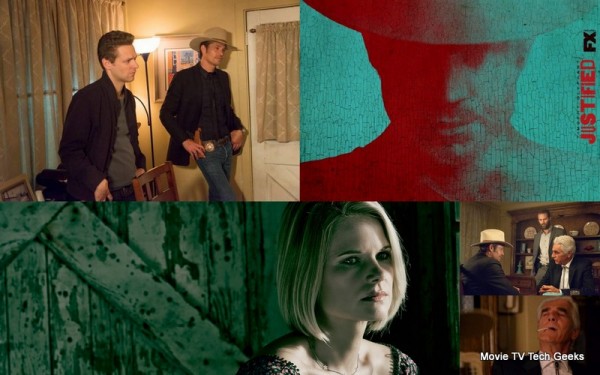 Last week on Justified, it made viewers wonder why things seemed to be moving so slow since it’s the final season, but this week’s “The Trash and the Snake” takes the show in a whole new direction which is great.

Watching Ava wake up from her night’s sleep is a good way to open this week’s Justified. Boyd stares at his lady for quite a while with his wheels turning the whole time before she awakens. It has the feel of this being the last time there is such a peaceful moment between the two. Boyd finally leaves for the day after a short talk and Ava goes from adoring lover to snitch as she gets on the phone with Raylan.

The meeting with Raylan and Ava is a little more fruitful for the Marshals Service. She tells him about Markham and how Boyd was very respectful of the major player. Givens knows the name, but doesn’t seem that well informed about the man. Ava is still as jumpy as ever. Being a rat is not easy on her nerves and it’s getting worse.

If Ava hated having to spend time with Raylan, she was in for a worse meeting as Katherine Hale waited for her in her own hotel room. This Hale lady just has the most evil look to me. There’s something about her face and that fake smile that screams “demon cougar.” Hale knows Ava told her a lie about where she had been all day and lets her know it. She then invites her out for a girls’ day of fun.

While the girls were doing their thing, Raylan paid Art a visit. The injured boss tells Raylan a bit more about Markham and Katherine Hale. It turns out that Markham likely ratted out Hale’s husband even though they were partners in crime. Raylan is intent on wrapping all the bad guys up into one big round up, but Art is not so confident. They go into some kind of snake metaphor before ending their little meeting of the minds.

All the shady dealings seem to connect to our sketchy real estate guy, Calhoun. He reluctantly breaks down the codes in his ledger of the land deals. Raylan and Tim are trying to figure out just what Markham and his man Walker want with all this rural land. Calhoun lets them know in a sidestepping manner how a nice old couple died from carbon monoxide poisoning. The same couple that called Ty Walker a peacock died as their old furnace poisoned them. Tim and Raylan check the scene out later on and find where plastic had been taped over the windows to make sure they never woke up. This Markham crew is low down as they come. 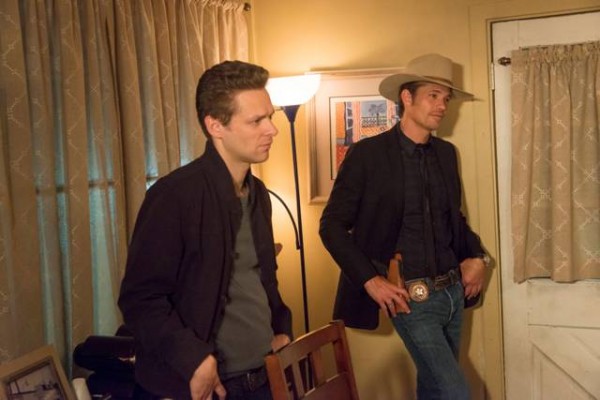 The lunch between Hale and Ava is uncomfortable and gets even more so once Hale unveils the cocaine as dessert. Ava isn’t feeling it, but goes along eventually. They end up at a jewelry store where Hale snatches a high dollar tennis bracelet as Ava is distracting the salesman. Hale used to have places like that at her beck and call when her hubby was ruling the roost. She still has money, but isn’t at the level she was at that point.

Quinn Duffy and Boyd head out to talk to this weirdo who knows safes inside and out. Along the way Duffy lets Boyd in on Markham’s secret desire to grow a pile of weed in Harlan. The man believes the hippie lettuce will be legal very soon in Kentucky. They meet the safe wiz and he wants to do some tests on a similar safe at an abandoned location. Every event involving Duffy ends in a strange way, usually involving blood. The wiz seemed confident enough about his craft, but something goes hellishly wrong. He managed to blow himself into a billion red blood cells that get sprayed all over Boyd and Duffy when a cell phone rings. It wasn’t clear who had the death phone on them. So much for the wiz. 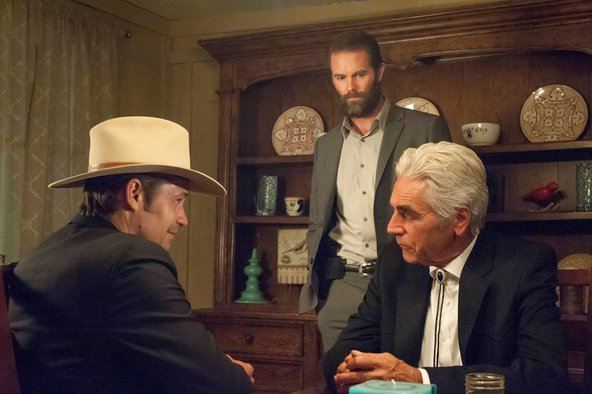 Dickie Bennett got some more screen time this week when Raylan and Tim paid him a visit to find out about his land sale. He didn’t want to help them at all, but it eventually came out that Loretta McCready was the new owner.

Ms. Loretta got a visit from Ty Walker. Same deal. Dude wants the land and is willing to pay handsomely. The young lady is not interested, but offers the man a drink, apple pie special. The same drink that Mags used to off enemies if you will remember. The devious Walker is interrupted from his drink when Raylan and Tim show up at the door. Givens is pissed now that he found out about the nice couple that was murdered by this man. He dares Walker to not leave just as Loretta has asked him to do. Mr. Walker makes like he is clearing a path to his gun, but instead gets his phone to call Markham. Best decision of his now extended life. 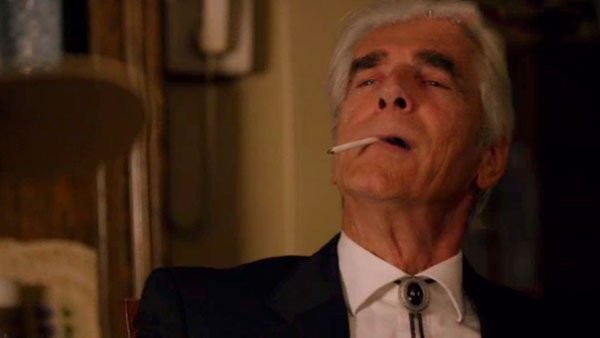 Markham shows up to Loretta’s place to talk. Raylan bullies the man, telling him directly that he will not be buying this land. Markham doesn’t like being told what to do clearly. The thing I got out of this scene was the difference between Raylan’s reaction to Markham and Boyd’s. Crowder was fearful to the point of embarrassment, while Raylan totally disrespected the man and didn’t give a damn who he was in the crime world. Right there in that kitchen, Raylan was a gunslinging god that would have cut down both Markham and his goon Walker. Their power outside of that room was irrelevant to the Marshal.

Ava and Hale’s fun day ended on a sour note as Katherine brought up the guard that attacked Ava. She knows something, but just enough to scare Ava. And scare her it does. She calls Raylan as soon as the crazy Hale leaves her room. She then gets to packing, but then Boyd walks in. Sucks to be Ava right now.

Boyd seems remarkably calm to have just seen a fellow human blow himself up. He is so excited about the possibility of the legalized weed that he forgets the death scene he witnessed earlier at the safe I guess. He is plum giddy as he tells Ava how he is going to get rich off of Markham’s own idea. Ava acts interested even as she is plotting some kind of getaway. Girl has trouble at every turn. Her only hope is Raylan, and he keeps threatening her with a return trip to jail each time he sees her.

This was the best episode of the season so far. More Raylan face to face with the bad guys is what every viewer would want.