Home All News Politics Just who is Maurice Symonette aka Donald Trump’s ‘Michael the Black Man’? 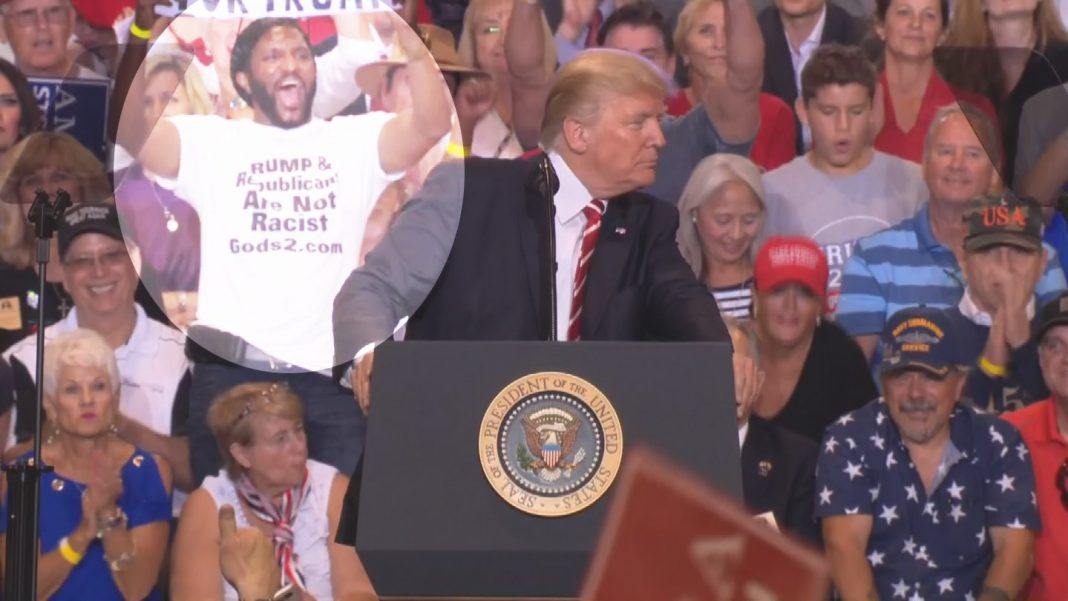 Who is Maurice Symonette? In another charlatan tactic employed by the Trump administration, the individual also known as “Michael the Black Man” is a political propaganda character that serves as a distraction, making Trump and the Republicans look grossly incompetent and devastatingly desperate.

Since his Phoenix rally earlier this week, Trump has reintroduced us to his new campaign tool – Symonette, a.k.a Maurice Woodside. Many outlets have already profiled the man holding a sign that said, “Blacks for Trump,” digging deep into his background as a criminal, cult follower, and militant negro. Along with holding his perfectly placed sign (right behind Trump in view of all the cameras) Symonette also wore a t-shirt that let the world know, “Trump and Republicans are not racist.” The one-time cult member who belonged to Temple of Love in the 90’s, looks to be a reformed pro-black activist who now makes YouTube videos about the goodness of white people, the dangers of Cherokee Native Americans (who are the real KKK racist slave masters per Symonette) and the evils of Hilary Clinton and her Islamic State connections. The man also considers white people “White Gentiles who are Black Peoples Republican Emancipators,” which is why I am sure he fits right into Trump’s overall plan to win the White House a second term. While I understand but do not agree with, white people’s move in having a token black person as a means to show other black people that they aren’t that bad, it rarely ever works. And when you use any ole person for the sake of “representation” it becomes more of a joke than a serious attempt to reach minorities. Such is the case with Michael the Black Man and Trump.

A part of me doesn’t even put all the blame on Symonette. The man clearly has signs of someone who deals with mental illness. I would not be surprised if he genuinely believes what he says and Trump and his people happened to stumble upon him and said, “Just go with it.” The other part of me believes that Trump has paid this man to be the face of his 2020 campaign that is aimed at getting black people to finally accept him. But speculation aside, this just looks bad on all sides because instead of focusing on dealing with the issues this country is facing, Donald Trump is on the campaign trail… for 2020.

The real focus should not be on the black man holding the sign because anyone in their right mind isn’t paying him any attention. I actually laugh at the fact that Trump’s people thought it was a good idea to let him be on camera. The outrage, anger or however people are feeling about the situation should be aimed at the man who 53% of college educated white women voted into office. Why is the president of the United States, who just took office a little over eight months ago, spending time at campaign rallies? You won Trump! You should be focused on leading this country to greatness, not maintaining or getting support for 2020. I mean, if you were smart, you would understand that being presidential and acting like an adult who holds the important position in America is what will secure a bid for you in the next election. But I digress because the key word here is “smart” and from what I’ve seen, intelligence is just not something at work in the White House right now.

As I said earlier, this is a distraction. We have become so consumed with the things Trump does, that weighs no kind of significance to the overall well being of the nation, we don’t see these antics for what they are. I 100% guarantee you that white people are laughing at Symonette and if they were wise, they would have no business with him. His presence only adds to the lack of credibility already associated with #45’s presidency. Michael the Black Man is a conspiracy theorist who no member of the sane voting population gives any real thought to because he’s so all over the place. Nothing he says can be considered valid.

All of this just speaks to the absurdity that is our country’s leaders right now. This is embarrassing. It is not funny and from my point of view, only serves to show how lost we truly are under Trump’s rule. Nobody who is serious about their position as president of a country would embrace this foolery let alone allow it to be a fixture at his rally.

Alas, what more can you expect from the circus that is America 2017? Maurice Symonette is a non-factor who doesn’t deserve our attention. He doesn’t represent on any level how black people feel now or will in the future about Trump. 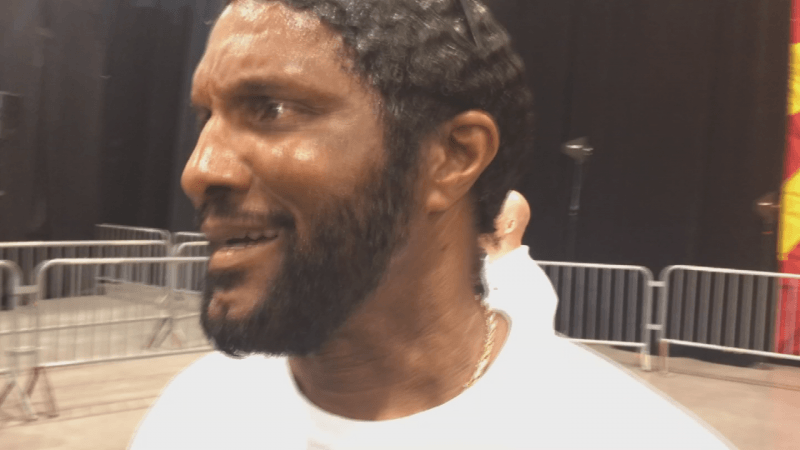 His Site Gods2.com Leads Visitors to HonestFacts.com, a Site Listing Conspiracy Theories About the Cherokee Indians

The first one claims that the “Real K K K Slave Master Revealed & is the Cherokee!” Symonette claims that Trump will “Solve America’s debt” and “make all Indians pay Taxes!” The page also alleges that President Barack Obama, Clinton, and Senator Al Franken are Cherokee and Republican Senators John McCain and Jeff Flake, along with Mitt Romney are “White hidden MORMOM/CHEROKEES.”

“ Republican Senators who’re against Trump’s HealthCare Policy & all of his Policies are Mormon Cherokee’s. They are the Racist that believe White Gentiles & Black Republicans are Idiots & are not worthy to Rule,” the site reads.

Symonette also has a YouTube channel, where he has videos that go with many of his theories. He also refers to the Confederate Battle Flag as the “Cherokee Democrat Flag.” 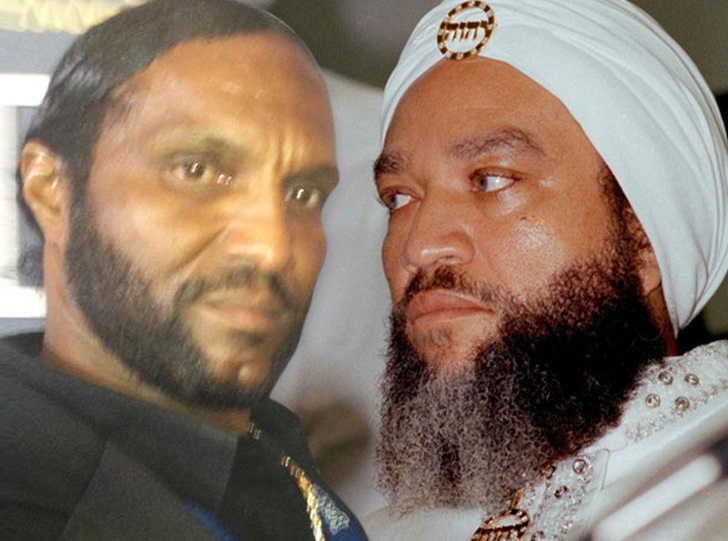 Symonette Was a Member of the Violent Yahweh ben Yahweh Cult Led by Hulon Mitchell Jr.

According to the Miami New Times, Symonette was a member of the Yahweh ben Yahweh cult. The cult was led by Hulon Mitchell Jr., who adopted the name “Yahweh ben Yahweh” and spent 11 years in prison from 1990 to 2001 on violating the Racketeer Influenced and Corrupt Organizations Act. Mitchell and other members of the group were convicted of conspiracy in over a dozen murders.

Symonette himself was charged with allegedly conspiring in two murders, but he was found not guilty. During the trial, his brother claimed Symonette helped beat a man who later died and stuck a stick in another man’s eye.

The Southern Poverty Law Center called the cult a “notorious black supremacist religious sect” and feared it was growing after Mitchell’s death in 2007.

Symonette, who was “Maurice Woodside” before joining Yahweh Ben Yahweh, explained to the Miami New Times in 2011 that he first met Mitchell around 1980, when he was 21 years old. He also said he was inspired by seeing Roots. “I was shocked and I was upset, so I became a warrior against the whites,” he told the paper. “I went insane.”

Yahweh Ben Yahweh is still a major influence in Symonette’s life, as evidenced by HonestFact.com. He even includes a disclaimer to show that he was not convicted of criminal charges related to the cult.

“BLACKS FOR TRUMP founder Maurice Symonette/Michael the Black Man was found innocent in YAHWEH Case after witnesses admitted they we’re lying to get a good Deal from the Gov. So after being questioned by YAHWEH Atty,” his site reads. “Congressman Alcee Hastings who caught Rosier lying about seeing an incident Sept.17.1983 but could not have seen this because Atty. Hastings proved that he was in Jail between Feb.1983 until Jan.1984 in Jacksonville Fla. at the time of of the made up incident in that never happened in Miami! google this!” 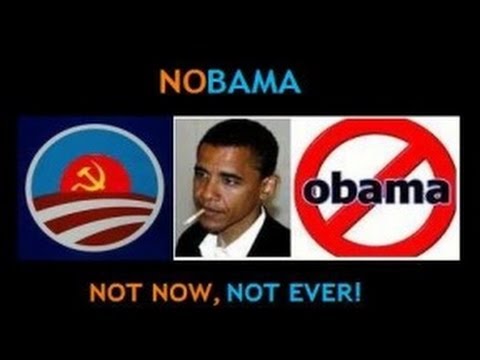 In 2008, Symonette made a name for himself as the leader of “Blacks Against Obama.” In an October 2008 interview with the Miami New Times, Symonette also claimed Obama wanted him assassinated.

“This was supposed to be an assassination,” Symonette told the Miami New Times. “Obama’s people were behind it.”

Symonette claimed that on September 25, he was getting on a bus to go to Mississippi and protest the first presidential debate with 30 other men. A man ran out of the shadows with an AR-15 and grabbed Symonette’s brother. “I bit his leg, right above his knee. He screamed and let the AR go,” Symonette claimed.

Symonette told the New Times that two other gunmen came out. He described the scene as if it was an action movie.

“I got up and started running in a zigzag, and one of my shoes done came off,” he told the paper. “One of the bullets … grazed my head, on the right side. When I put my hand there, I felt all the blood.”

Police did report a shooting and Symonette’s brother Al was taken to a hospital because a bullet went “straight through his arm.” The gunman was identified as Taytreon Edwards, 25, and the two other gunmen were never found.

Symonette told the New Times that a friend heard one of the gunmen say, “Where is the guy that Obama wants dead?” 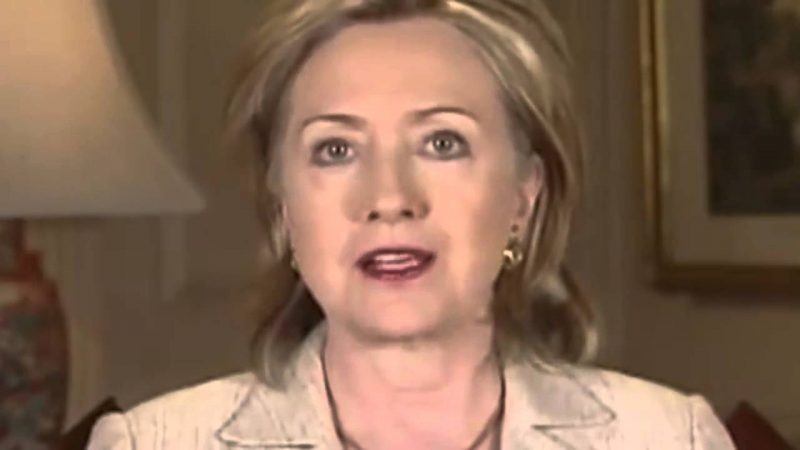 After appearing at Trump’s Lakeland, Florida rally in October, Symonette explained to the Miami New Times why he couldn’t support Hillary Clinton.

“One reason is because Hillary’s last name is Rodham, and their family members are Rothchilds, who enslaved 13,000 slaves as collateral,” he told the paper. “She’s also on camera kissing the head of the Ku Klux Klan and saying, ‘That’s my mentor.’ That’s all on my website.”

He added, “I completely despise Hillary. I hope the very worst for her chances for the presidency.” 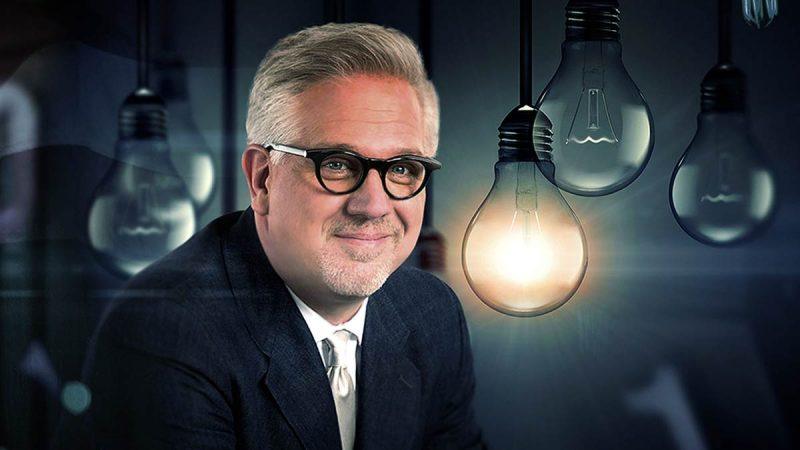 Symonette earned the attention of other conservatives before Trump. Back in 2010, MediaMatters noted that Glenn Beck praised him and other “black conservatives taking a real stand in the face of adversity.”

The Miami New Times also notes that Symonette was invited to a January 2012 Rick Santorum rally in Florida. Symonette, who was gaining attention among the Tea Party, told the audience that Democrats are “Nazis” in disguise.

“The Democrats, they’re the worst thing that ever happen to the black man,” Symonette told the crowd. “They’re the slave masters.”

In 2011, The Miami New Times reported that one of Symonette’s nephews, Adolphus, was accusing him of trying to create another cult. “Adolphus is just telling you what he thinks will get him out of prison,” Symonette told the paper.