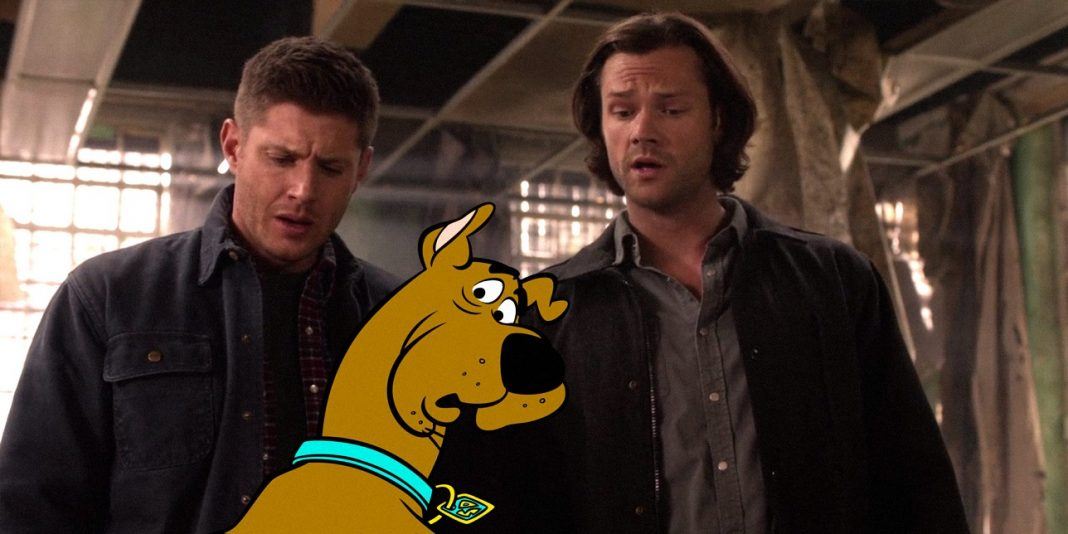 I caught the Scooby Doo panel at Comic-Con, in part because Jim Krieg and Jeremy Adams, who wrote the Scoobynatural crossover episode of “Supernatural,” were on it. (Jeremy has joined the writers room for “Supernatural’s” final season, and we got to spend some time with him at Comic-Con, which means I am VERY excited to have him on board – he’s a bona fide Supernatural fan, and there’s a reason I think fanfic gets it right most often!)

Although I came in part for Jim and Jeremy, I ended up enjoying the entire panel and taking a trip down memory lane with some classic Scooby Doo, so I’m very glad I went. I mean, who hasn’t loved Scooby Doo? I certainly have. This is the 50th anniversary of the series and all its iterations, so the panel was a celebration and there was a lot of enthusiasm in the room – it was also the 50th anniversary of Comic-Con itself, so there was extra excitement.

Other panelists were Grey Griffin (voices Daphne), Kate Micucci (voices Velma) and producer Tony Cervone. The Scooby Doo panel included some current news for the iconic cartoon. First, a new Blu Ray set will be available on September 3 that includes all 41 episodes, plus new bonus features. That got a cheer.

Second, there’s a new film coming out with 3D animation to introduce Scooby Doo to a new generation. The film is an origin story with Shaggy at ten years old and how his relationship with Scooby Doo forms, and how they tackle their very first case.

Tony: There’s lots of heart and emotion – and lots of things blow up too.

The panelists said that it was a challenge taking Scooby Doo from 2D to 3D, and that they struggled with exactly how Scooby Do should look.

Tony: Sometimes you have to listen to the character. Scooby Doo wanted to look like… Scooby Doo!

They took quite a few questions from fans, including whether they’d want to do a crossover with any other shows? (Teaming up is a Scooby tradition, including celebrities like Don Knotts back in the day and of course Sam and Dean Winchester more recently on Scoobynatural).

Grey: We could do something with Riverdale, that’d be cool

Jeremy: How about The Wire? Or X Files…

Jim: I would write another Scoobynatural episode with Jeremy if I could, because we had so much fun working with Supernatural and were treated really well.

Not surprising, since I’ve heard virtually every guest star that show has ever had talk about how that’s one of the best sets to work with – anywhere.

Although usually when the cast works with a celebrity guest actor, they don’t end up working with them directly. But every crossover impacts the show itself.

Jim: Every time you bring in new characters you integrate their playbook with ours.

Jim did say that he was a bit worried when the Supernatural showed up for real in that episode, though.

Jim: I thought oh no, they ruined it – ghosts aren’t real! I guess I’m that old guy yelling get off my lawn! (laughing)

The cast has worked together enough that they clearly enjoy each other.

Kate: If Grey is there, it’s a party!

They also talked about working with Casey Kasem, and how he conducted the actors, hands going up up up annnnnd down down down to direct their voices.

And they all had lots of love for Frank, who voices Fred but couldn’t be there.

It’s a bit different being a voice actor; you don’t tend to be recognized like other actors.

Kate: Once I was wearing my glasses and my hair was kinda like this and these kids were like oh hey look, it’s Velma! (laughing) And I was like, well actually…

We also got a few historical tidbits about Scooby Doo – like that the title is from that old Frank Sinatra song that goes “Scooby dobeedo…” Who knew?  When they were trying to come up for a name for the dog in the cartoon, that came to mind – that’s the name of the dog! (Jim Krieg has a fascinating knowledge of all things Scooby Doo).

The panelists all expressed gratitude to be involved with such an iconic project.

“We’re so lucky that we get to go to work each day and be kids and make stories for today’s kids.”

The Comic-Con packed ballroom, full of ‘kids’ of all ages, agreed.