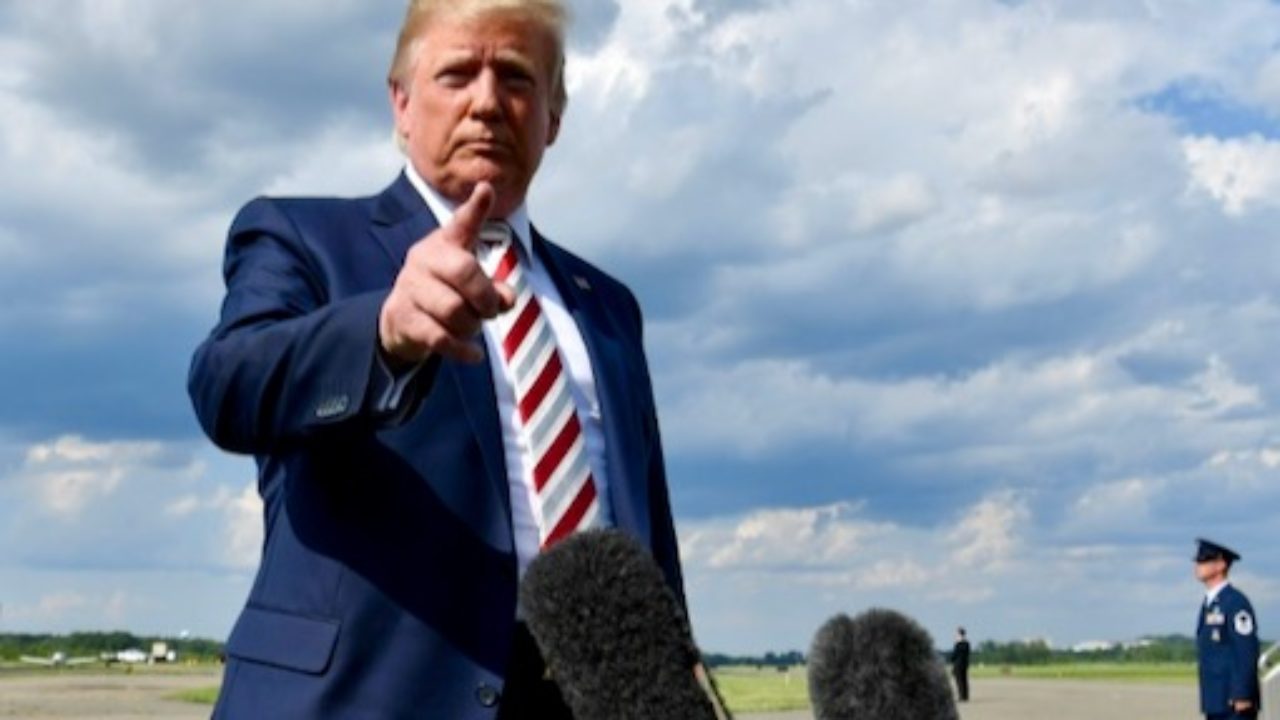 In the latest chapter of an escalating trade war with China, Trump is again accusing China of manipulating its currency to gain trade advantages. In doing so, he’s misrepresenting the facts.

Trump has been making a charge of currency manipulation since the 2016 presidential campaign, even promising to take action against China right after taking office.

His administration took it to the next level Monday, formally labeling China a currency manipulator after China allowed its currency, the yuan, to fall below the seven yuan-to-$1 level for the first time in 11 years. It was also the first time the Treasury Department put China on the currency blacklist since 1994. The designation could pave the way for more U.S. sanctions against China.

Trump’s latest complaint in tweets earlier Monday came after the dramatic drop in the yuan.

TRUMP: “China dropped the price of their currency to an almost a historic low. It’s called ‘currency manipulation.’ Are you listening Federal Reserve? This is a major violation which will greatly weaken China over time!”

THE FACTS: Trump is correct to be worried that China may decide to use its currency as a weapon in its ongoing trade war with the United States. But it is Trump’s own Treasury Department which had failed to cite China as a currency manipulator in five reports it had issued since Trump took office in January 2017. Treasury’s move on Monday came in a press release as opposed to a regular currency report issued every six months.

A weaker yuan would make Chinese goods less expensive in the United States, potentially offsetting some of the impact of the tariffs Trump has already imposed on $250 billion in Chinese goods and is threatening to widen to another $300 billion in goods next month. Those U.S. tariffs drive up the cost of Chinese imports to American consumers.

Trump seems to blame the Federal Reserve for not taking action against China in the currency area. In reality, the Treasury’s previous reports had repeatedly said that China did not meet the requirements established in U.S. law to be branded a currency manipulator. In its surprise announcement late Monday finally labeling China a currency manipulator, the Treasury Department called China’s explanations of its recent currency moves implausible and contended that the real purpose of “China’s currency devaluation is to gain unfair competitive advantage in international trade.”

Trump’s mention of the Federal Reserve could also be an effort to pressure the central bank to lower its benchmark interest rate further. It cut the rate for the first time in more than a decade last week, and many analysts believe it will cut rates again in September to keep the fallout from a trade war from derailing the U.S. economy.

Falling U.S. interest rates can put downward pressure on the dollar’s value against other currencies. A weaker dollar could boost U.S. export sales.

In his typically boastful rally this past week, Donald Trump placed himself too high in the pantheon of presidents when it comes to getting his judicial picks on federal courts. He’s been having a good run on that front but he’s not where he said he is — ranking right under George Washington, no less.

Much of the week was filled with the cacophony of Democratic presidential candidates having their say on the debate stage. Their pronouncements did not always fit with the facts. They skewed reality on climate science, immigration policy, the auto industry and more.

TRUMP, on his record of filling federal judicial appointments: “There’s only one person … who percentage-wise has done better than me with judges.” — Cincinnati rally Thursday.

THE FACTS: No, at least four have done better.

Trump is properly ceding first place to George Washington, who had a judiciary entirely made up of his choices simply because he was the first president. But he’s not acknowledging that at least three modern presidents had a better record than Trump of getting their judicial choices on the courts. Russell Wheeler, a visiting fellow at the Brookings Institution and former deputy director of the Federal Judicial Center, has been keeping track.

He found that Trump’s confirmed judges make up 17% of total federal judgeships. At this point in their presidencies, John Kennedy had filled 30% of the federal judiciary, Bill Clinton had filled 20% and Nixon had filled 25%.

President Donald Trump is distorting his record when it comes to gun control.

Speaking out this week against two mass shootings in Ohio and Texas, Trump asserted that his accomplishments in stemming gun violence stand out compared with previous presidents. He also suggested an unwavering commitment to improving mental health treatment.

In both cases, his words haven’t matched reality.

A look at the claims:

TRUMP: “We have done much more than most administrations. …We’ve done, actually, a lot.” — remarks Sunday to reporters.

THE FACTS: Trump’s record on gun control is not groundbreaking.

Congress has proven unable to pass substantial gun violence legislation, despite the frequency of mass shootings, in large part because of resistance from Republicans, particularly in the GOP-controlled Senate. That political dynamic seems difficult to change.

It’s true that after other mass shootings Trump called for strengthening the federal background check system, and in 2018 he signed legislation to increase federal agency data sharing into the system. In December 2018, the Trump administration also banned bump stocks, the attachments that allow semi-automatic weapons to fire like machine guns and were used during the October 2017 shooting massacre in Las Vegas.

But he has rolled back some restrictions, reneged on pledges and resisted Democratic calls to toughen other gun control laws.

Within weeks of taking office, Trump scrapped a federal rule imposed by President Barack Obama that could have made it harder for some mentally ill people to own guns. Under the rule, the Social Security Administration was supposed to provide information to the gun-buying background check system on recipients with a mental disorder so severe they cannot work or handle their own benefit checks. The rule didn’t make certain people ineligible to buy a firearm, but was designed to ensure the background check system was comprehensive. Republican lawmakers and gun advocates criticized the regulation for reinforcing a stereotype that people with a mental disorder are dangerous.

At a February meeting with survivors and family members of the 2018 Parkland, Florida, school shooting in which 17 people died, Trump promised to be “very strong on background checks.” Trump claimed he would stand up to the gun lobby and finally get results in quelling gun violence. But he later retreated, expressing support for modest changes to the federal background check system and for arming teachers.

Some Democrats have called for even stronger measures such as renewing a federal ban on assault weapons, which was put in place during the Clinton administration before it expired under President George W. Bush. Trump has shown no interest in taking up that issue.

TRUMP: “We must reform our mental health laws to better identify mentally disturbed individuals who may commit acts of violence and make sure those people not only get treatment, but, when necessary, involuntary confinement.” — remarks Monday.

THE FACTS: His words don’t match his past actions.

Trump’s budgets would have slashed the federal-state Medicaid program, which provides health insurance for more than 70 million low-income and disabled people and is also the major source of public funds for mental health treatment.

Such proposals failed to advance in Congress, even when both chambers were under Republican control.

The president’s 2020 budget does call for some spending increases on smaller mental health programs, including an increase of $15 million, for a total of $107 million, to expand school-based programs. The Parkland shootings last year at a Florida high school heightened sensitivity to the mental health needs of students.

But such increases for specific programs pale in comparison to the impact of Medicaid cuts. This year Trump again proposed to turn the program over to the states, limiting future federal financing. That would have led to a cut of about $1.4 trillion over 10 years from currently projected levels of federal spending.

The administration says that’s not really a cut, since spending would have continued to grow, just more slowly. But limits on federal financing would have forced states to confront hard choices over competing priorities like mental health or addiction treatment, nursing home costs or prenatal care for low-income women.

As a candidate, Trump had originally promised that he would not cut Medicaid.