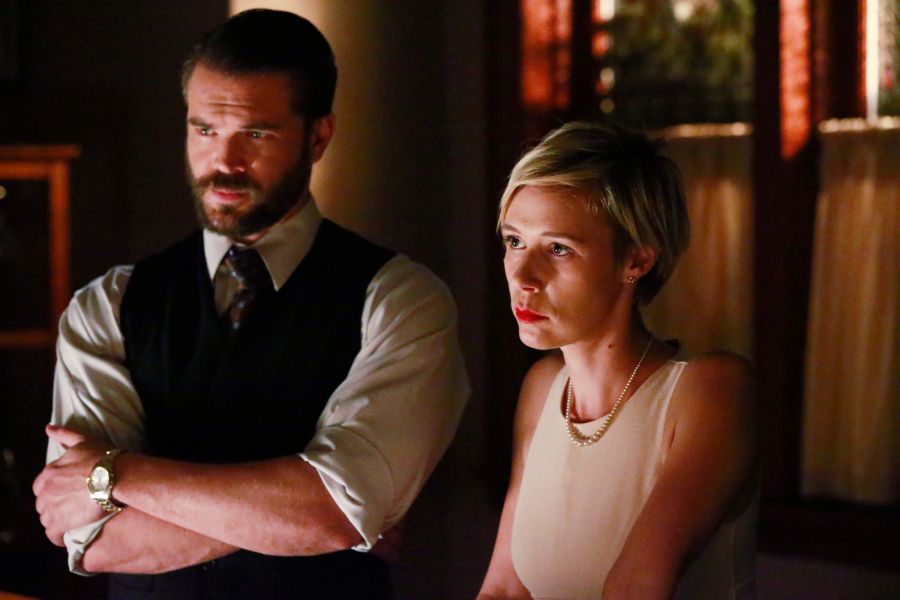 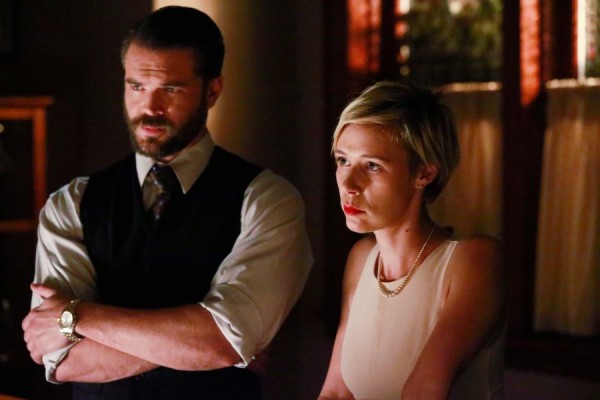 It’s ‘Two Birds, One Milestone’ on “How to Get Away with Murder,” as we find out that Frank may be just a little psycho, among other things. The web continues to become more and more tangled.

He and Laurel get it on, and it looks like they have been going all night. While he takes a shower, she rummages through his stuff obviously trying to find something connected to the money they found in the storage unit.

In class (am I the only one who forgot they go to school) the Keating Five tell West, once again, to let Rebecca and the whole thing go. Michaela is particularly still very upset at the fact that he let her sleep with a drug addict. She does not give him a break. Annalise walks in which starts the class and she calls on Asher to answer a question. During this time, we see a flashback of what happened when Annie showed him the tape of Bonnie being raped as a child. We see here too that he tells her about Lake Trotter and, of course, she said, “We will fix it.”

For whatever reason, Annie leads Bonnie to believe that she on her own is the reason that Asher has changed his mind on testifying. She tells her that she’s done something right, and she should be happy about that. After she delivers “the good news” Annalise pays a visit to “a bitch”, ADA Sinclair, and she tells her to stop messing with Asher before she makes one call to the reporters and turn her into a crazed prosecutor. She agrees but lets her know she is going to destroy her on the Hapstall case.

While she briefs the team on what they need to do to find the info they need to clear the Hapstalls she gets a phone call from a fellow professor that she keeps blowing off. She insists that it is urgent, so Annie takes the call and surprise- Professor Jill Hartford killed her husband in self-defense.

The Keating Five (this week since Asher is back) spend time with the Hapstalls to go over possible suspects. Asher suggests it could have been Catherine and Caleb’s real parents, and they abruptly reject that notion, so does Michaela.

At Professor Hartford’s Annalise shows up and not soon after realizes the scene is exactly the she described it should be over the phone. She knows that things aren’t what they seem. We also find out professor Hartford is a transsexual.

Back at the Hapstalls, while Caleb and Catherine walk outside, the team talks about their case and Laurel suggests that they are guilty. As they discuss the case, Laurel realizes that Catherine is recording them on her iPad. As they try to delete it, she catches them. “Might as well know what our lawyers are saying about us for once.”

As Annie gives them a verbal lashing, Frank walks in with bad news. “Nate’s wife is dead.” She runs to his house, peach cobbler in hand, but he doesn’t answer. So she leaves it at the door.

The Keating Five continue their research on the Hapstalls, and it all comes back to their birth parents. Michaela is against Ollie hacking into the adoption records (Connor suggest it) because she is adopted herself.

While this is going on, a young girl shows up asking for Bonnie. She is one of Jill’s students who claims to have seen her husband beating her the night she killed him. She, of course, is a plant and instead of Annalise being upset about the fake witness, she is upset that she didn’t think of it.

Annie visits the DA office demanding the charges be dropped. They say no instead Grill Annalise about Jill calling her before the cops arrived, accusing her of coaching Hartford into setting the scene up as self-defense. They even threaten to charge her as an accessory after the fact.

On top of this, Annalise has to deal with Asher. He comes into her office telling her he got a phone call from a reporter about Tiffany (Trotter Lake). “I thought you handled this.” Apparently ADA Sinclair leaked Trotter Lake info. Asher warns her that his dad, Judge Millstone, hates her and will come for her because the case affects her too. So what does Annie do? Finds dirt on him.

She presents corruption info on Judge Millstone to the DA in exchange for the charges against Jill to be dropped, and ADA Sinclair leave Asher alone.

The DA takes it, and Annie lets Jill know that she is free to go. They share a moment where they tell each other they are glad their husbands are dead.

Still on the case, The Keating Five uncover that Helena Hapstall had a secret child, which gives them the info they need to claim that he is the killer since he had so much to gain from Catherine and Caleb going to jail. Michaela apologizes to Caleb, who is forgiving to say the least, and he asks her if it is true that she thinks he has a great ass.

Annalise drops off another cobbler to Nate, who tells her that’s not what he needs. He then confesses to giving his wife the pills Annalise wouldn’t so that she could die in peace. He blames Annalise for stealing the only time he had left with his wife by putting him in jail. He tells her that he doesn’t hate her, he just doesn’t care about her and that no one is ever going to love her the way he loved his wife. He closes the door in her face, and as she takes it all in, West shows up, then leaves when he sees her. She follows him.

West makes his way back to his apartment, and Annalise is there waiting for him. She tells him Nate’s wife died, and West goes off on her. He grills her about Rebecca, and she tells him his girlfriend ran off. West doesn’t believe her. She then tells him that his mother killed herself, and that’s why he can’t trust her or any other woman.

Frank and Laurel hit a milestone in their relationship as he takes her to meet his family and they take her in right away.

Asher’s dad tells him that Annalise caused the DA to open an investigation into every case he’s resided over which is the end of his career. He blames his son and tells Asher their relationship is done.

ADA Sinclair pays Bonnie a visit. She tells her about Tiffany Howard and Trotter Lake, and we find out it has something to do with a gang rape.

Ollie hacks into the secret Hapstall baby and finds out who he is and that he lives two blocks from their house. But what he doesn’t know is that he too is a hacker and thus has hacked him.

Franks meets up with his guy who gives him a bag with a body in it only it’s not Rebecca, it’s Catherine Hapstall. And she’s not dead.

Where is this going? Sigh… until next week to find out more.