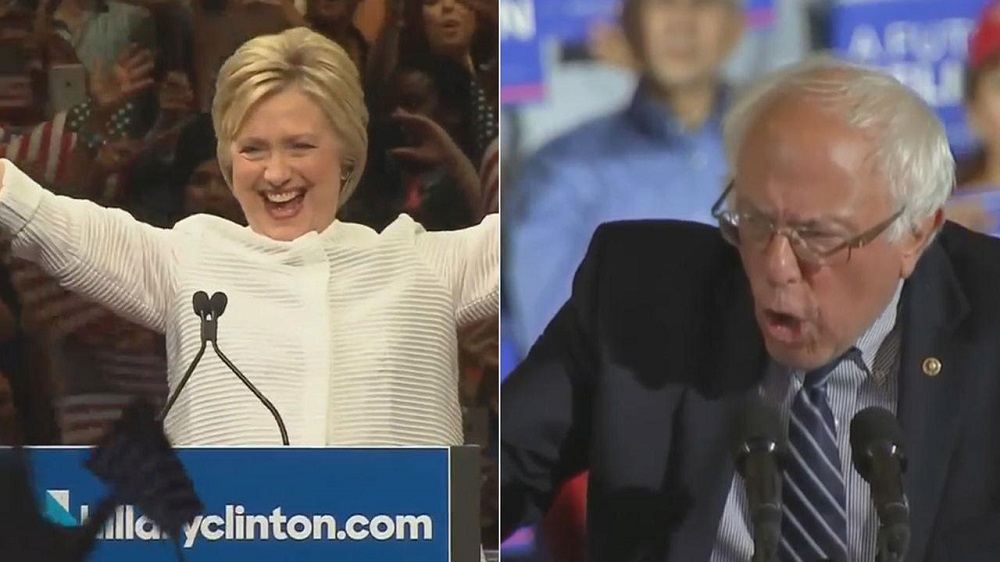 Former Secretary of State Hillary Clinton made history as she became the first woman in America to be a major party’s presidential nominee, after a string of victories on the final Super Tuesday of the Democratic primary season.

After a long and contentious primary process, Hillary Clinton became the first woman in American history to be a major party’s presidential nominee. A string of victories on the final Super Tuesday of the primary calendar pushed her total delegate count past the 2,383 threshold. The former secretary of state won Democratic primaries in California, New Jersey, New Mexico and South Dakota, putting her total delegate count at 2,755, as you can see in the InsideGov visualization below.

The biggest prize of Tuesday night was California, where 548 total delegates were up for grabs. Vermont Sen. Bernie Sanders crisscrossed the state in the weeks leading up to the primary, hanging his campaign’s hopes on a strong showing there. Polls leading up to the primary indicated a tight race, but the results show Clinton won by a larger margin than anticipated. With 99.7 percent reporting, Clinton has 56.6 percent of the vote to Sanders’ 42.4 percent.

Sanders performed better in the northern and eastern parts of California, while Clinton did well in urban and coastal areas in the lower two-thirds of the state. She logged definitive victories in San Francisco and Los Angeles counties, for example, where she won by 11.7 percent and 18.4 percent, respectively.

California is an expansive state, with a diverse and large population. A recent poll indicated that Sanders had made inroads with Hispanic voters in California, with 46 percent in support of him.

But a look at county-level demographic data shows Sanders continued his trend this primary season of performing better in areas where the population is predominantly white. In every California county where Sanders won on Tuesday, the population is at least 69 percent Caucasian. In Humboldt County, for example, the population is 82 percent white. Sanders won there by 37 percent, the largest margin of victory in the state.

Use the drop-down menu to see income, race and education data for each county in the state.

Clinton continued to do well in areas that are more racially diverse. In Santa Clara County — where American Community Survey data shows the population is 49.27 percent Caucasian — Clinton won by 29 percent. San Francisco and Los Angeles counties, where she won by double-digit margins, are also diverse, at 49.48 percent and 53.43 percent Caucasian, respectively.

New Jersey was the second-largest delegate prize of the night, with 142 available delegates. Clinton won in all but two counties in the state, securing a big victory with 63.3 percent to Sanders’ 36.7 percent. The demographic trends continued in the Garden State. The largest margin of victory there was Clinton’s 46.4-point win in Essex County, which is 42.42 percent Caucasian.

Use the drop-down menu to see income, race and education data for each county in the state.

Tuesday’s results reflect the larger story of this cycle’s Democratic nomination race. As the county-by-county breakdown of the U.S. shows, Clinton consistently did better in more diverse pockets of the country. She performed especially well in the South and West, where larger portions of African-Americans and Latinos live.

Use the drop-down menu to see how Clinton and Sanders performed on a county level throughout the U.S.

Despite the string of wins and an insurmountable delegate lead, Sanders promised his supporters on Tuesday night that he would continue to fight for the Democratic nomination. During a late-night rally in Santa Monica, Calif., Sanders thanked his supporters, rebuked the principles put forth by presumptive Republican nominee Donald Trump and said he would compete in next Tuesday’s primary in Washington, D.C.

Sanders also vowed to stay in the race until the Democratic convention in late July in Philadelphia.

“We are going to fight hard to win the primary in Washington, D.C., and then we take our fight for social, economic, racial and environmental justice to Philadelphia,” Sanders said to an eruption of cheers. “The struggle continues.”