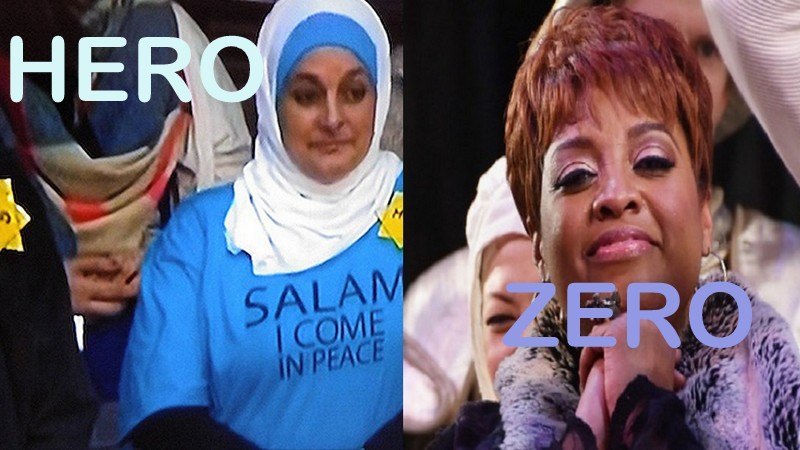 This week’s Hero is a woman who stood up to a room full of idiots and their leader, and the Zero is a woman who still dodges her parental responsibilities aka Sherri Shepherd, who loves telling the world how everyone else dumps on her. Take a close look in the mirror and wonder why you love playing the victim. 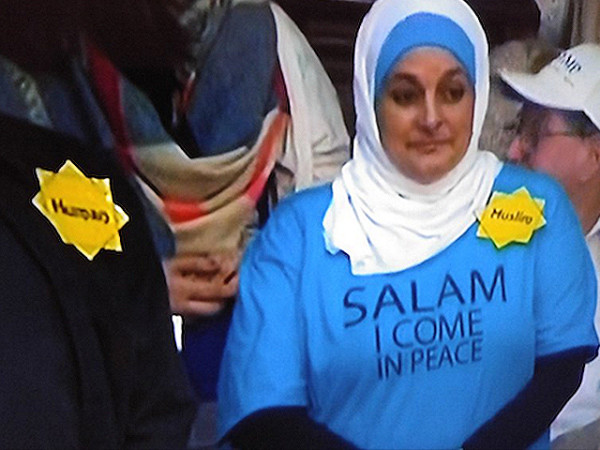 Rose Hamid is a 56-year-old flight attendant who stood up in the middle of Donald Trump’s rally in South Carolina after he suggested that Syrian refugees who flee their country have ISIS affiliations. She did not make any noise; she did not cause a disruption other than wearing a jilbab and standing up in silent protest. She is a hero not only for taking a stand, but she serves as the actual litmus of Trump’s agenda. Hamid is a hero because, thanks to her, the world now, (as if we didn’t before) has no way of explaining away Donald Trumps bigotry.

I am beyond saddened by the way he is allowed to insight idiots to champions his one-sided, elitist, damaging, dangerous ideals. As she was escorted out of the rally, older white men waved Trump signs in her face, and one guy nearly stepped right in her path to give her thumbs down. What is this, the third grade where you throw up hand signs in excitement when you get your way? And Trump himself smiled in agreement and confirmation that his supporters were doing the right thing. How disgusting. It’s all disgusting.

I mean when you have people chanting his name, “as instructed by Trump campaign staff before the event in case of protests,” according to CNN, and shouting, “You have a bomb, you have a bomb,” at Hamid, what the hell can you really expect? It’s a circus. It’s a straight up unbelievably horrible spectacle that we are allowing to happen. Can we please shut him down? This is out of hand. The only good thing that came out of this situation is seeing his true colors at work, shinning bright. There is no filter to explain away. No, “well maybe this is what he meant.” None of that. Hamid did nothing wrong, nor did the Jewish man who stood next to her. To top it all off, Donald Trump’s ass had the nerve to paint himself as the victim as he told the crowd after the “disturbance,”

“There is hatred against us that is unbelievable…It’s their hatred; it’s not our hatred.”

I am through. LITERALLY, I can’t. Rose Hamid is an American hero. 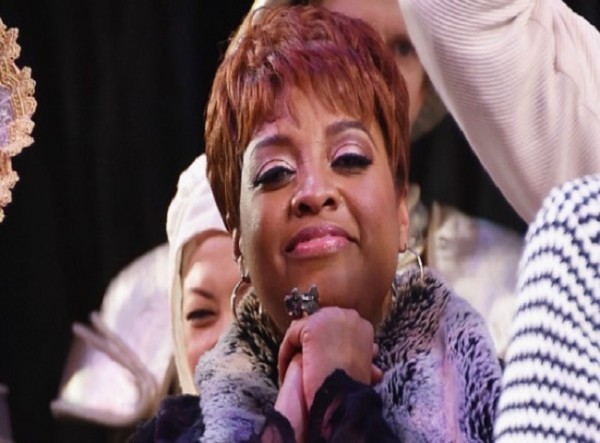 The “that’s not my child” song is really getting old and is why Sherri Shepherd is this week’s zero. She recently asked a Pennsylvania Supreme Court to reverse a lower court and court of appeals decision that names her as the legal guardian of the son she and ex-husband Lamar Sally had via a surrogate during their marriage.

“The lower court usurped the power of the Pennsylvania legislature by finding this contract enforceable,” the petition states.

As the story goes, she maintains that Sally “tricked” her into agreeing to have a baby via a surrogate so that he could end their marriage and collect child support and she only went along with it because she was afraid of losing him. They went through the necessary procedures, paid the money, had the baby and then got a divorce. Even after having the court rule her as the legal mother of the baby boy, Sherri still cries foul play.

Now she is once again in a judge’s face trying to get them to negate the $4600 a month she has to pay to Lamar Sally in spousal and child support. The reason she feels is appropriate for the reversal? She has not genetic connection to the baby. Come on already Sherri!

She vehemently argues that despite all the things she did to make the baby “happen” she is not the legal mother. She goes on to support her claim by citing “that Pennsylvania law does not allow someone to become a mother by a contract – and that the only laws to become a parent are through adoption or the act of giving birth,” according to People.com.

I guess she figures because she has no genetic DNA, being that the baby was conceived using Sally’s sperm and an egg donor, she should not be bound by law to take care of it. This is just an all around horrible situation that doesn’t get any better when she goes on talk shows answering questions about the baby, Sally and why she doesn’t want to be in the picture.

When it comes down to it, she needs to either shut up and be the child’s mother or get custody of the baby, so she doesn’t have to pay any money; which will probably be hard to do. No judge is going to give a child to a woman who didn’t claim it in the first place.

Zero behavior on Sherri Shepherd’s part in wanting the Supreme Court to co-sign her foolishness.