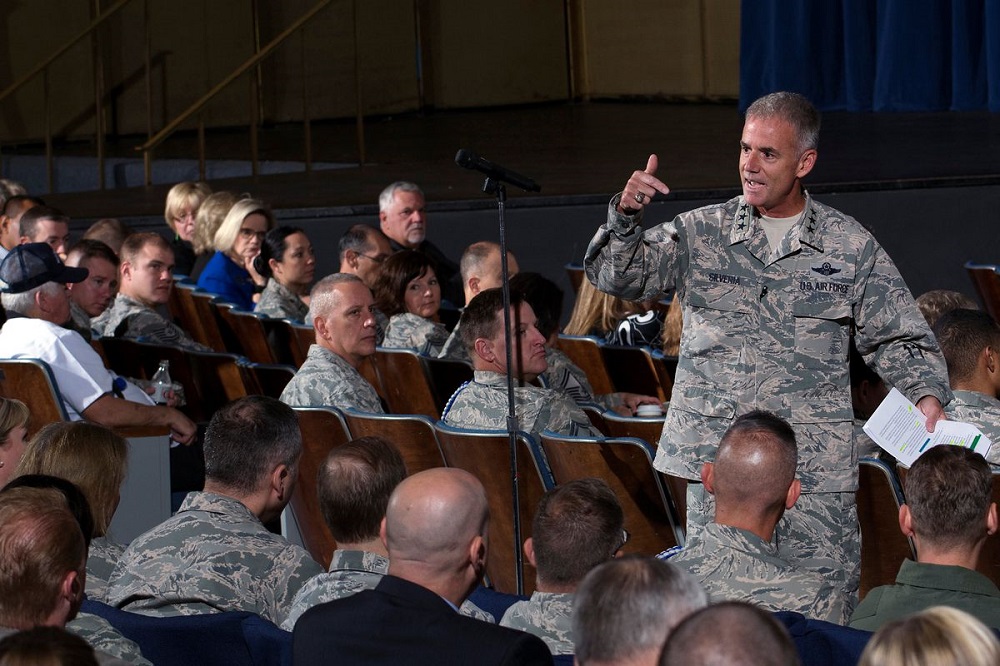 It’s time for Heroes and Zeros. This week, the winner is a member of the military who does not play when it comes to shutting down racism. The zero is a group of people who believe that kneeling in protest is akin to the seven deadly sins.

In a world where people see wrong and say nothing, it is refreshing to know that there are still those who will boldly stand up to wrongdoing without apology. This week’s hero is Lt. Gen. Jay Silveria because he did not hesitate to condemn racism when it reared its ugly head at a Colorado Springs U.S. Air Force Academy prep school.

It is time out for those in high positions to idly stand by as racism spreads. It does not matter if it directly affects you or not. It is going to take everyone who believes in equality and fairness and love standing up and saying something. Lt. Gen. Jay Silveria did just that when five black cadet candidates found racial slurs written on their doors. He promptly sprung into action and made it known that this kind of behavior would not be tolerated… ever!

“If you’re outraged by those words, then you are in the right place. That kind of behavior has no place at the prep school… and it has no place in the United States Air Force… You should be outraged as a human being… The appropriate response to horrible language and horrible ideas is a better idea… I want you to videotape this so you have it, so you can use it — so that we all have the moral courage together… If you can’t treat someone with dignity and respect, get out.”

“I wanted to have a direct conversation with them about the power of diversity. Ultimately, these men and women are going to be lieutenants in the United States Air Force.”

White men in America hold the power. Yes, things are shifting, but they are the ones who are still the most visible in every aspect of our society. Their willingness to put their pride aside and call out and do something about racism is what’s going to help change things.

Lt. Gen. Jay Silveria is a great example of the work that is taking place by individuals who want to see a truly better America. He could have handled the situation quietly or not handled it at all. He could have turned a blind eye to it. But he chose to make an example of the incident because those being discriminated against need to know that there are people who don’t look like them, fighting for their rights.

For taking a no-nonsense approach to doing his part to stop bigotry, Lt. Gen. Jay Silveria is a hero.

I am not referring to the NFL team here. No, I am talking about the Americans claiming to be patriots who have a problem with the protests NFL players are engaged in as a show of solidarity and awareness about social injustices in the United States. The taking of a knee in the National Football League ramped up this past week and folks were big mad. Every person who has an issue with players, of any racial background, kneeling during the National Anthem, you are all zeroes!

How wonderful must it be to dismiss the struggles and challenges of others simply because of the color of one’s skin? White people have said some pretty disgusting things about those who are doing no harm kneeling in protest of the bad things that happen to people of color (POC). Their inability to understand the reasons for the protest baffles me. Opponents want to twist the meaning and play on the heartstrings of those who consider themselves patriots by saying that kneelers are disrespecting the flag, which disrespects the military. They want die-hard Americans to believe that Colin Kaepernick and those who followed his lead in taking a knee hate the sacrifice of soldiers who have given their lives for our freedoms. The protest that Athletes are doing has nothing to do with the military and EVERYTHING to do with the way America disrespects its own by not bringing to justice members of law enforcement who kill POC without remorse or consequence.

When was the last time a white person had to fight for something as precious as life or for the right to live their truth? If they are in the streets protesting, it’s about something so frivolous in the grand scheme of all that really matters. To be so upset about someone kneeling during the national anthem? Well, that just goes to show how privilege can blind you to compassion, empathy, and understanding.

Being an American is about living life the way that you want. What too many white people don’t realize is that there are portions of society who don’t have that freedom and are daily in fear of their lives. I don’t know about you, but that sad truth is something for which to protest. Kneeling during the playing of a song whose additional stanzas have some questionable lyrics should be the least of everyone’s worries.

To the “American patriots” who’d rather see a black man stand with his hand over his heart to honor a flag, than a police offer convicted for killing an innocent black man (or any man of color) in cold blood, you are all losers.