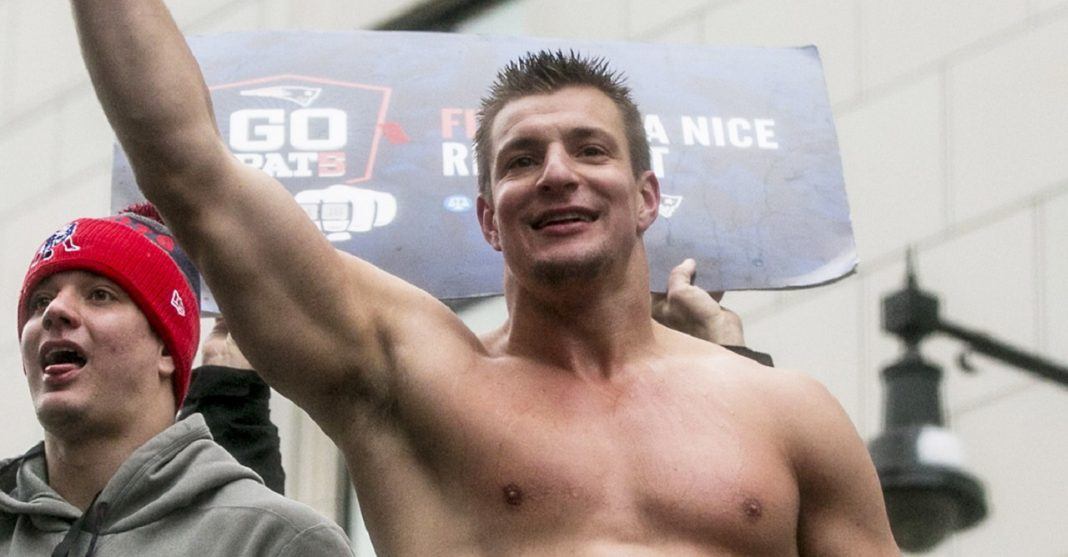 Rob Gronkowski, the New England Patriot’s fun-loving tight end, loved by all football player is finished with the NFL.

He made it official on Sunday via Instagram that he’ll be retiring from the NFL after nine, Super Bowl packed seasons. Going out on top is always a smart choice as you venture into your next career.

Yeah, but what about Gronk?

Well, the party is about to go bazooka .

Look out for Gronk gone wild, Gronk unhinged, Gronk unleashed. Without football strings attached, Gronkowski is suddenly a hot free agent year-round, his talents pitched to far more than 32 suitors, from Hollywood to endorsements to, well, whatever Gronk wants.

He was fun-loving and fearless, a dominant tight end whose Super Bowls were won with New England and whose playful personality won over even the most casual fans. Gronkowski, who announced Sunday that he is retiring from the NFL after nine mostly dominant, title-filled seasons, set scores of records for the Patriots at his position and could light up the scoreboard like his smile can light up a room.

The numbers only tell a speck of the story.

Boy, was it so much more fun just being Gronk.

He stood tall at the Super Bowl and WrestleMania ; won big games and took on gamers; starred on the field and in film; and did it all with a goofy charm that belied a gritty tight end who seemingly always played through pain. The Patriots are going to miss Gronkowski as they try for yet another Super Bowl championship.

But Gronk’s not going anywhere.

So let’s take a look at what made Gronk so great, and what could be ahead:

Gronkowski never would have had a sustained run as a popular pitchman, hosted kids shows or popped up in movies had he not been one of the greatest tight ends — yeah, probably the greatest — in NFL history.

Gronkowski was hobbled by injuries last season and played just 13 games, and each ache raised constant questions about possible retirement. Gronkowski had plenty left in the Super Bowl and still had clutch catches in the tank on New England’s final drive. He had two catches on the Patriots’ go-ahead touchdown drive, the second catch set up Sony Michel’s 2-yard score in the win over the Rams.

Tom Brady to Gronk, one more time for a title.

Gronkowski went out a champion — and he may be headed to Canton.

He had 10 catches for 145 yards and three touchdowns in New England’s win at Denver in an AFC Divisional playoff win in 2011. Gronkowski might have been more impressive in the 2015 AFC championship game, when he converted two fourth-down attempts on the game’s final drive and had eight receptions for 144 yards and one touchdown, perhaps his best effort in a crushing defeat.

Gronkowski is the only NFL tight end with more than 500 career receptions who averaged more than 15 yards per reception.

He averaged nearly 69 yards per game and cracked juvenile jokes about setting a record 69 TDs for a tight end, thanking his mom when he reached the mark. He finished with 79 TDs receiving and one rushing.

The final image of Gronkowski in a Patriots uniform, greatness.

The final image of Gronk out of uniform, hilarious.

He celebrated the Super Bowl title on the parade route by stripping off his shirt , chugging beers, flipping his hat backward and acting like a frat boy on a float. A hurled beer from the crowd that ricocheted off his hulking chest was the final hit in his career.

Gronk seemed to make as many TMZ clips as NFL Films highlights.

Earlier this month, TMZ reported, ”Gronk and his bikini model girlfriend have taken their hotness to sea … “cause the couple put on one hell of a twerk fest on a boat in Mexico.” Peter King prose, this was not.

Who knows where Gronk will end up in retirement.

Gronkowski has a standing offer from WWE to move from the gridiron to the squared circle and become a professional wrestler like his childhood friend, Mojo Rawley. Gronkowski stormed over the barricade at WrestleMania in 2017 and bro-hugged Rawley after he won the Andre the Giant battle royal.

Gronk vs. The Rock?

With WrestleMania just weeks away, the goofy Gronkowski could crash the show again and get mixed up in more shenanigans. Heck, “Gronk” doesn’t even need to make up a ring name.

Gronkowski might find his NFL bio condensed on a Hall of Fame plaque down the road but there’s almost no way it could fit in his offseason activities. Gronkowski was a hit with the average fan — from kids to grandparents — because of his endearing persona that made him about as A-list as any athlete. He had a personal ”Talk with Gronk ” that poked fun at any idiot who wanted to eat a Tide Pod. He hosted “Crashletes” on Nickelodeon , was a fed a beer bong by Patriots teammate Julian Edelman in the “Entourage” movie, and played a heightened, animated version of Gronk on “Family Guy.”

Gronkowski found victory lane just as fun as the end zone when he partied with Daytona 500 winner Kurt Busch and team owner Tony Stewart in 2017. He had Monster Energy drinks and Monster girls all around him, a winning combo in an offseason pit stop for Gronk.

But he went from whimsical to warm on the Insta post where he called it a career.

“Cheers to all who have been part of the journey,” he wrote, “cheers to the past for the incredible memories, and cheers to the uncertainty of what’s next.”

The party’s over for Rob Gronkowski. Then again, it might just be getting started.

The four-time All-Pro posted his decision on Instagram, saying that a few months shy of his 30th birthday “it’s time to move forward and move forward with a big smile.”

“It all started at 20 years old on stage at the NFL draft when my dream came true, and now here I am about to turn 30 in a few months with a decision I feel is the biggest of my life so far,” Gronkowski wrote in his post. “I will be retiring from the game of football today.”

The playmaking tight end, who turns 30 in May, leaves as a three-time Super Bowl champion who established himself as one of the most dominant players at his position and one of Tom Brady’s favorite targets. His personality — on and off the field — was as big as his biceps, and he always seemed to be the life of the party.

“In the nine years that I have known Rob Gronkowski, I have never known him to have a bad day,” Patriots owner Robert Kraft said in a statement. “He always has a youthful exuberance about him and is a joy to be around.

But Gronkowski has been dogged in recent seasons by back, knee, ankle and arm injuries that have limited his ability to stay on the field.

It led him to hint at retirement following New England’s Super Bowl loss to the Philadelphia Eagles to end the 2017 season and again last month after the Patriots’ Super Bowl win over the Los Angeles Rams.

In his Instagram post, Gronkowski thanked the Patriots organization, coach Bill Belichick and New England’s fans for their support during his nine NFL seasons.

“Thank you for everyone accepting who I am and the dedication I have put into my work to be the best player I could be,” Gronkowski wrote.

“His production spoke for itself, but his daily attitude, unmistakably positive energy wherever he went and toward whoever he touched will never be forgotten,” Belichick said in a statement.

“Love you man!!” Brady wrote on Instagram, along with an emoji of a goat to refer to Gronkowski as the greatest of all-time. “Couldn’t be a better person or teammate!!!!”

It was a sentiment shared by receiver Julian Edelman.

“The other goat,” Edelman posted on his Instagram page, also referring to Brady.

Though he won’t have the longevity of some of his contemporaries at tight end, Gronkowski is expected to get strong consideration for the Pro Football Hall of Fame when eligible.

Gronkowski, a second-round pick in the 2010 draft, had his fourth career 1,000-yard receiving season in 2017 and was an All-Pro for the fourth time that season.

But at times he looked like a shell of himself during the Patriots’ Super Bowl run this past season. Gronkowski finished the 2018 regular season with just 47 catches for 682 yards and three touchdowns.

He had one of his best games of the season in the Patriots’ Super Bowl win over the Rams, hauling in six catches for 87 yards, including two receptions on New England’s only touchdown drive during their 13-3 victory.

A fan favorite in New England for his gregarious and playful persona that included awkward dance moves and touchdown celebrations, Gronkowski was one of the most dominant tight ends of his era.

He’ll also retire with 79 career TD catches — regular season and playoffs — which is third all-time by a tight end behind only Antonio Gates (116) and Tony Gonzalez (111).

Brady and Gronkowski connected on 78 TD passes. It is the second-most scoring connections between a quarterback and a tight end in NFL history behind only Philip Rivers and Gates (89) and is fifth overall between quarterbacks and all pass-catchers.

“Rob will leave an indelible mark on the Patriots organization and the game,” Brady said, “as among the best, most complete players at his position to ever play.”