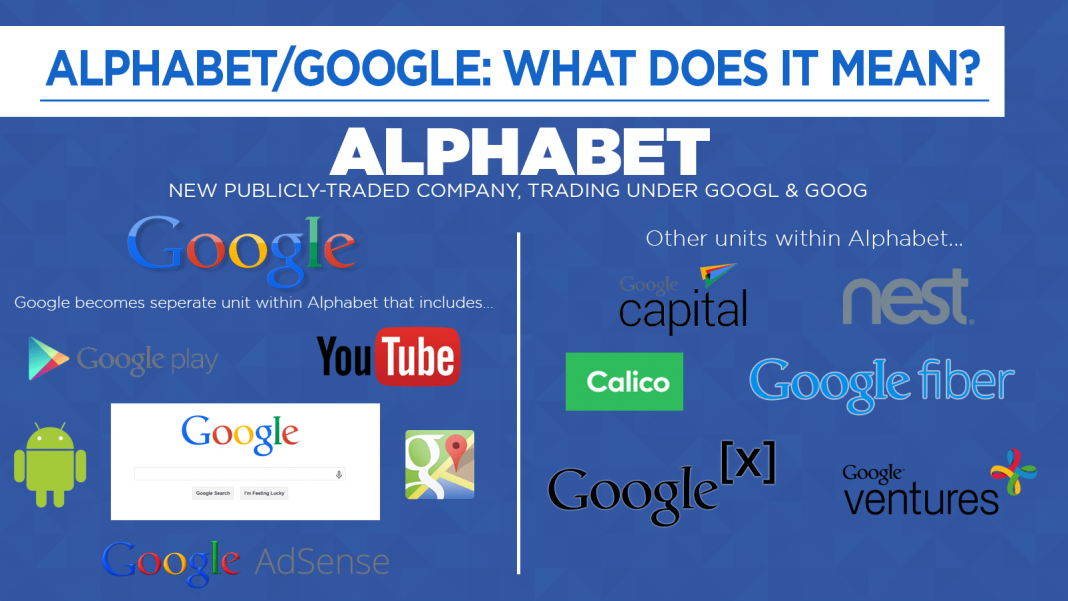 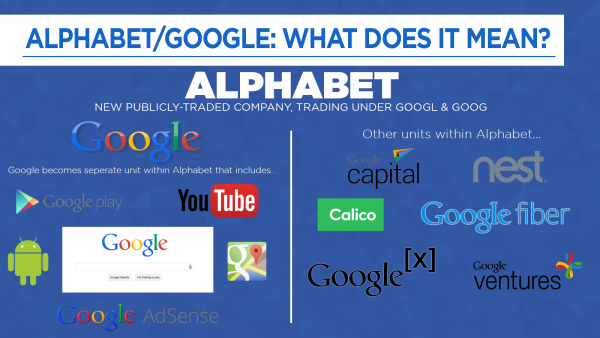 In a recent stunning announcement, Google announced that the company known as Google will be splitting and its components will be headed by a new holding company they call Alphabet. Google itself will become one of Alphabet’s subsidiaries. Alphabet is a symbolic and somewhat catchy piece of nomenclature that Microsoft has yet to learn.

“We liked the name Alphabet because it means a collection of letters that represent language, one of humanity’s most important innovations, and is the core of how we index with Google Search!”

Google has been under fire lately for its seeming lack of focus on its projects as well as its core competencies like search (to which it lost Apple to Microsoft’s Bing) so the company gave the world a stunning and solid retort, by creating companies out of its major divisions, giving them more control while being lightly orchestrated by Sergei Brin and Larry Page at Alphabet. Is renewed focus just the reason for the name change or is there something else?

Google is one ginormous company. Its name, derived from the term for a number 1 followed by a hundred zeroes relates really well to the search and advertising giant. But the company may have become too big for its own good and has earned criticism of losing its focus due to several failed projects like Google Glass, Google Talk and the struggling Google Plus. But creative founders Larry Page and Sergei Brin continue to approve and think up new products and ventures for what used to be just a search and advertising company.

“Google is not a conventional company. We do not intend to become one. As part of that, we also said that you could expect us to make smaller bets in areas that might seem very speculative or even strange when compared to our current businesses. From the start, we’ve always strived to do more, and to do important and meaningful things with the resources we have.”

And they have. In fact, Alphabet may actually be a play on words. It’s an Alpha bet. A major change for the company. While creative and competent enough to create and implement their projects, Google has trouble maintaining and managing them. Focus and personnel turn to new projects and sidetracks existing ones. Rumors of restructuring had been floating around for some time but not to the extent of what Google let out of the bag. So here’s the ingredients of Google’s soup. Not all the letters will be there but no bowl of alphabet soup is always complete.

“…Alphabet is mostly a collection of companies… The largest of which, of course, is Google. This newer Google is a bit slimmed down, with the companies that are pretty far afield of our main internet products contained in Alphabet instead…”

“…Sundar has been saying the things I would have said (and sometimes better!) for quite some time now, and I’ve been tremendously enjoying our work together. He has really stepped up since October of last year, when he took on product and engineering responsibility for our internet businesses. Sergey and I have been super excited about his progress and dedication to the company. And it is clear to us and our board that it is time for Sundar to be CEO of Google”

Now that Google’s former projects have their own CEOs, Google itself can be more focused on its original missions. The web, advertising and search. Everyone else would be too without much interference from the top brass. However, Pichai would still have to worry about funding everyone else. To do so, profitable areas such as Android and YouTube will remain with Google.

Larry Page sums up the restructuring with the following:

So is the restructuring some sort of corporate move to ease on taxes as some may speculate? Perhaps, but it’s hard not to dismiss their real need to restructure. Alphabet is not likely to stop expanding and acquiring other profitable ventures and for that, any organization must be organized.