The trailer for “Life” has been released, which is a biopic centered on late acting icon James Dean starring Dane DeHaan and Robert Pattinson, showing that his acting chops are far beyond “Twilight’s” Edward Cullen.

Anton Corbijm, who is known for A Most Wanted Man, directs the movie. Starring in the movie is Dane DeHaan as James Dean and Robert Pattinson as photojournalist Dennis Stock.

The movie follows the story of Life magazine photographer Dennis Stock, who is assigned to photograph James before the release of East of Eden, which was Dean’s first major movie role. As Dennis follows James around the United States on his press tour, a friendship develops.

The film is set in the mid 1950s in various locations throughout the states, from Los Angeles to New York. In addition, there is also focus on James’ childhood home in Indiana, where Dennis took some of the most iconic images of the actor for Life Magazine. Dennis was determined to shoot Dean in all the environments that had “affected and shaped [his] unique character.”

The movie also stars Ben Kingsley, who plays Warner Brothers studio executive Jack Warner, who warns Dean that if he wants to be famous he must follow the rules.

Life is reportedly an attempt to revive a previous project about James Dean that failed to impress critics at the Berlin film festival earlier this year. The movie initially garnered harsh reviews from several notable critics, including The Guardian’s Peter Bradshaw who said “[the movie] is a laborious, lugubrious movie maintained at a somnolent cool-jazz tempo – a waxworky piece of American icon worship featuring a sympathetic but mannered performance from Dane Dehaan impersonating James Dean…This is a movie about photographs and photography, a subject about which Corbijn knows perhaps more than any movie director working. But the subject arguable made him self-conscious. At any rate, the film has the inert stasis of a photo spread.” 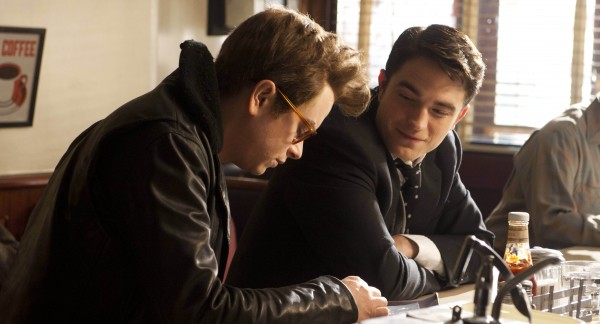 Recently, Robert Pattinson opened up about being able to relate the James’ story saying, “In the movie, anyway, [Dean] had a very specific idea of what he wanted his life to be and was disillusioned before it had even started happening.” Going on to recount his own experience as he shot to fame saying, “All my experience…I had no idea what was going on when Twilight first started taking off. When we were doing interviews, I’d never done a press junket. I was like, ‘What?’ You just sit in a room and talk shit for eight hours, I was telling jokes. And every day my manager was getting calls from the studio going, ‘you have to tell him to shut up!” Also, I had nothing to lose.”

Pattinson’s London-heritage seems to help him establish a convincing vintage edge that fits well within the film. In the trailer, Robert blends in perfectly with the era of the film, as he is seen sporting side-swept hair and a sleek suit throughout.

In addition, from DeHaan’s appearance in the trailer, he too brings a unique quality to the lead role, which is fitting as that was what caught photographer Dennis Stocks’ attention about James Dean.

In reality, James Dean died tragically in a car crash at the age of 24 in September of 1955. At the time, his movie East of Eden was only released, but soon after two other already shot movies were released that starred Dean and he eventually became most known for his role in Rebel Without a Cause. With only three films under his belt, James uniqueness, abilities and potential earned him great recognition as an actor after his sudden death. Although Life attempts to capture the beginning of James’ short career, it tells the story through the perspective of Dennis who is watching James’ rise to fame from the sidelines.

The movie is largely based on Dennis’ book Beautiful Enigma: LIFE with James Dean, which he published in 2005.

The trailer gives a glimpse of the allure that gained James so many fans, as Dennis describes him as having “an awkwardness, something very pure.” Despite, coming into the world of Hollywood, naïve to the realities, the young actor had an unexpected confidence that is shown as James questions Dennis, “You think you’re giving me something that’s not already coming my way?” Suggesting that James was well aware of his capabilities and presence that would eventually earn him international praise.

After the release of the trailer, many are speculating that Pattinson will be one to look out for in this film and this role will likely further his presence as a notable actor from his early teen-heartthrob days as Edward Cullen in the Twilight series.

The movie will be released in France on September 9, 2015. However, since there was a fall through with the contract for the movie rights in the United States, the details haven’t been released for its US premiere date, other than it should be expected out sometime in Fall 2015.
Life Movie Trailer