While there’s been no official word on what President Donald Trump‘s administration will be doing with their energy plan, having the White House scrub its website of all Obama climate change information is rather telling.

This happened on Friday, and anyone who had bookmarked Obama’s policies would find that ‘page not found’ message as if it never existed. There’s no mention of climate change, and this familiar image below is nowhere to be found. The page contains only the briefest of mentions of the environment: “Protecting clean air and clean water, conserving our natural habitats, and preserving our natural reserves and resources will remain a high priority. President Trump will refocus the EPA on its essential mission of protecting our air and water.”

The good thing about the internet is that nothing disappears forever so you can still check out the Barack Obama White House website here as it’s been archived. Donald Trump can’t erase everything, after all.

This was replaced by Trump’s “America First Energy Plan” which contains the following language:

Energy is an essential part of American life and a staple of the world economy. The Trump Administration is committed to energy policies that lower costs for hardworking Americans and maximize the use of American resources, freeing us from dependence on foreign oil.

For too long, we’ve been held back by burdensome regulations on our energy industry. President Trump is committed to eliminating harmful and unnecessary policies such as the Climate Action Plan and the Waters of the U.S. rule. Lifting these restrictions will greatly help American workers, increasing wages by more than $30 billion over the next 7 years.

Sound energy policy begins with the recognition that we have vast untapped domestic energy reserves right here in America. The Trump Administration will embrace the shale oil and gas revolution to bring jobs and prosperity to millions of Americans. We must take advantage of the estimated $50 trillion in untapped shale, oil, and natural gas reserves, especially those on federal lands that the American people own. We will use the revenues from energy production to rebuild our roads, schools, bridges and public infrastructure. Less expensive energy will be a big boost to American agriculture, as well.

The Trump Administration is also committed to clean coal technology, and to reviving America’s coal industry, which has been hurting for too long.

In addition to being good for our economy, boosting domestic energy production is in America’s national security interest. President Trump is committed to achieving energy independence from the OPEC cartel and any nations hostile to our interests. At the same time, we will work with our Gulf allies to develop a positive energy relationship as part of our anti-terrorism strategy.

Lastly, our need for energy must go hand-in-hand with responsible stewardship of the environment. Protecting clean air and clean water, conserving our natural habitats, and preserving our natural reserves and resources will remain a high priority. President Trump will refocus the EPA on its essential mission of protecting our air and water.

A brighter future depends on energy policies that stimulate our economy, ensure our security, and protect our health. Under the Trump Administration’s energy policies, that future can become a reality. 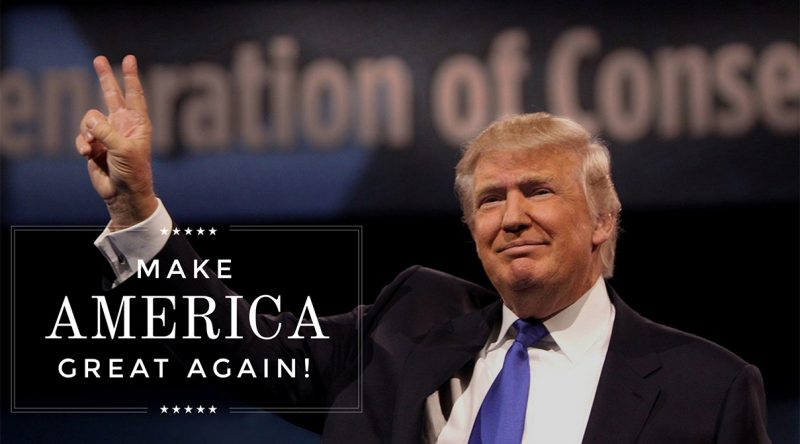 President Donald Trump has disputed climate change, pledged a revival of coal and disparaged wind power, and his nominee to head the Energy Department was once highly skeptical of the agency’s value. What this means for states’ efforts to promote renewable energy is an open question.

States that are pushing for greater reliance on wind and solar power are not quite sure what to expect as Trump takes over. Many of them depend heavily on federal renewable-energy tax credits, grants and research, much of which comes from the Energy Department.

Former Texas Gov. Rick Perry, Trump’s pick to lead the department, presents a contradictory figure: A Texas oil promoter, he also oversaw a huge expansion of wind-energy production while governor. When he ran for president in 2011, he included Energy on a list of departments he thought should be abolished, though he disavowed the idea Thursday at his Senate confirmation hearing.

“We don’t know what version of Perry is going to show up,” said Michael Webber, deputy director of the Energy Institute at the University of Texas, Austin. 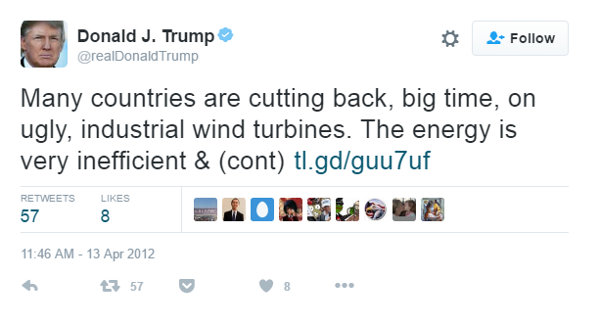 Renewable energy accounts for about 15 percent of the electricity generated in the United States. And 29 states have set targets for boosting their reliance on such power.

Officials, experts and advocates in more than a half-dozen states with some of the most ambitious goals told media outlets that they are on course to meet their targets. Most said that while Trump policies could slow the expansion, they won’t stop it.

The price of harnessing the power of the sun and wind has dropped so much that in many areas of the country, experts say it could be competitive with traditional power sources such as coal and natural gas even without federal subsidies. Further, they do not expect a fast repeal of the key federal tax credits that have propelled the industry for years.

Still, policies aimed at bringing more renewable power online quickly are not expected while Trump is in office.

“We need to be moving faster, not slower,” said Jeff Forward, president of the trade group Renewable Energy Vermont. “I fear we’re tapping on the brakes right now.”

Those who promote renewable energy are concerned because Trump has expressed doubts about whether climate change is real, even though scientists agree that it is happening and that the burning of fossil fuels is a major reason for it.

Trump also has called for reviving the coal industry, which has struggled in part because of the rise of renewable energy. And he has criticized wind turbines near Palm Springs, California, both for killing birds and for looking like a “junkyard.”

Perry, at his confirmation hearings, said he believes climate change is happening and that some of it is caused by human activity. He also said he favors an “all of the above” energy policy, the way he did in Texas, and wants the federal government to continue research on renewable energy. He didn’t say what he thought of green-energy tax credits and other incentives.

The federal wind credit is set to be phased out in 2019, and the solar one, four years after that. Those incentives and other federal spending on renewable energy in fiscal year 2015 totaled about $10 billion, nearly twice as much as similar subsidies for fossil fuels.

In Hawaii, federal tax credits reduced the price for developers and homeowners by about $125 million annually from 2011 to 2014, according to an analysis by Blue Planet Foundation. During that time, the portion of the state’s electricity coming from renewables nearly doubled from 12 to 21 percent.

Randy Iwase, chairman of the Hawaii Public Utilities Commission, said incentives are important to the state’s goal of having 100 percent of its power generated from renewable sources by 2045, the nation’s most aggressive target.

“We are in a toddler stage,” he said. “When you lose focus, when attention is distracted, when you make it less of a priority, the toddler kind of wobbles.”

The Energy Department said in a report last year that the cost of getting power from wind fell more than 40 percent from 2008 to 2015, and solar panel prices dropped more than 60 percent in that period.

Market forces have made green power big in Republican-led states, with wind turbines springing up along the Great Plains from Iowa to Texas. In those places – many of which have low or no green-energy requirements – the arguments for renewable power are more often cost savings and job creation, rather than the environmental benefits.

In December, Republican Gov. John Kasich of Ohio vetoed a bill that would have delayed the requirements there. This month, Phil Scott, the new GOP governor in Vermont, affirmed his commitment to Vermont’s goal of 90 percent green power by 2050.

Meanwhile, some Democratic-leaning states have been pushing their requirements upward. Since 2015, both New York and California have increased their targets to 50 percent by 2030, and New York Gov. Andrew Cuomo has indicated he would like to go further than that.

Hawaii Gov. David Ige, a Democrat, said he is committed to meeting the state’s target regardless of what policy changes come from Washington.