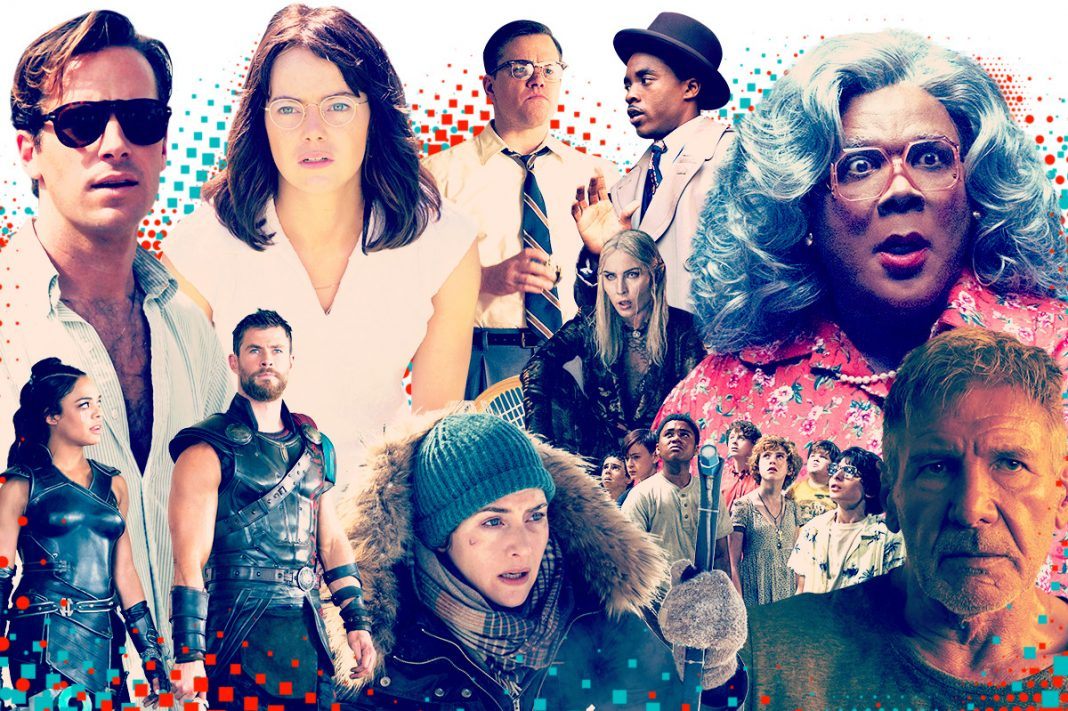 Normally Hollywood is behind the times, but after a two-year campaign where Donald Trump revealed the dark side of our country, filmmakers definitely were affected, and this fall slate of films will easily reflect that.

It might not be such a good thing for the box office as in darker times with our country; lighter escapist fare pulls people into those darkened theaters. With people facing an onslaught of Trump’s antics on a daily basis getting more of it at the theater might be a turn-off.

Movies take years to make, but many of this fall’s films may feel almost preternaturally programmed for the President Trump era. Some have been in development for more than a decade, others have been fast-tracked since the election. But moviegoers will soon have no shortage of films offering timely reflections on America and the policies of its president.

But even the typically all-consuming Oscar horse race might be secondary this fall – and not just because “Dunkirk,” ”Get Out” and “Wonder Woman” have already emerged as potential awards contenders. Instead, one of the fall’s most captivating dramas might be between Hollywood and the White House.

Writer-director Peter Landesman (“Concussion”) found himself making a film about the FBI battling White House interference while a curiously similar conflict played out between Trump, James Comey, and the FBI. His movie, “Mark Felt: The Man Who Brought Down the White House” tells the story of Felt (played by Liam Neeson), the legendary Watergate source known as Deep Throat, who was the No. 2 official at the FBI during the scandal. It’s been in the works since 2005.

“This movie could have been made ten years ago or five years ago. The fact that it’s coming out this year has a supernatural relevance,” said Landesman.

The film, which Sony Pictures Classics will release Sept. 29, gives a close-up to the man previously seen – in the movies – like the shadowy figure in the parking garage of “All the President’s Men.” ”Mark Felt just wanted to be left alone to do his job. However it turned out,” said Landesman. “Jim Comey wanted to do the same thing.”

Similar parallels may also follow Steven Spielberg‘s keenly awaited “The Post,” (Dec. 22). Spielberg’s drama is about The Washington Post’s 1971 publishing of the classified Pentagon Papers, which revealed many of the government’s lies about the Vietnam War.

The film, starring Meryl Streep and Tom Hanks, is like an all-star team assembled as Hollywood’s response to Trump. The project was announced in March and shot over the summer. Streep, who memorably critiqued the then-president-elect at January’s Golden Globes and was then deemed “over-rated” by Trump, is already viewed as all-but-certain Oscar contender.

Other timely tales of American heroism are also rushing to the screen. Clint Eastwood, who has previously voiced support for Trump, is prepping “The 15:17 to Paris” about the 2015 Thalys train attack in France, with the real-life heroes playing themselves: Anthony Sadler, Alex Skarlatos, and Spencer Stone. Whether it will be finished in time for 2017 isn’t yet clear; no release date has been announced, but Eastwood works famously fast.

Several other films are coming that explore the intersection of patriotism and politics. Just as Trump has ordered more troops to the war in Afghanistan, films like Richard Linklater’s “Last Flag Flying” will contemplate the human cost of battle. “Last Flag Flying” (Nov. 3), a kind of loosely connected bookend to Hal Ashby’s 1973 film “The Last Detail,” stars Bryan Cranston, Steve Carell and Laurence Fishburne as Marines reunited to bury a dead son killed in Iraq.

The film, a tender and comic road-trip odyssey, isn’t overtly political or even a war film; Linklater is skeptical any war film can be anti-war. But it seeks to intimately understand the individual repercussions of war, free of saber-rattling or mythologizing.

“It will mean killing civilians. It will mean dead Americans. It will mean exorbitant costs. It will mean all that. That’s what war is,” says Linklater. “That’s what does worry one about Trump. It’s always the guys who didn’t fight that want to prove their manhood by launching some bombs and missiles and being a tough guy. Both Republicans and Democrats it’s the same. We haven’t had a soldier anywhere near leadership in so long.”

“Thank You for Your Service” (Oct. 27), starring Miles Teller and Haley Bennett, is about three soldiers returning from Iraq, adjusting to civilian life and fighting post-traumatic stress disorder.

Other films will recall civil-rights icons. “Marshall” (Oct. 13), stars Chadwick Boseman as a young Thurgood Marshall defending a black chauffeur in 1941 against his wealthy socialite employer in a sexual assault and attempted murder trial. Rob Reiner’s “LBJ” (Nov. 3) stars Woody Harrelson as the 36th president, taking office after the assassination of John F. Kennedy and passing the Civil Rights Act.

Whether all of these films will resonate any differently in 2017 than they might have another year remains to be seen. George Clooney‘s “Suburbicon” (Oct. 27), which he directed from a script by Joel and Ethan Coen, is about a bucolic 1950s suburb with a violent and racist underbelly. Clooney, who recently announced a grant of $1 million with his wife Amal to combat hate groups in the wake of Charlottesville, says the film is about out-of-control white-male paranoia.

“Trump got elected while we were shooting it,” said Clooney. “A bunch of crew members came up to me and said, ‘It’s too bad it’s not coming out today.’ And I said, ‘Unfortunately these issues never get old.’ So, yes, it’s timely, but unfortunately, it’s always timely.”