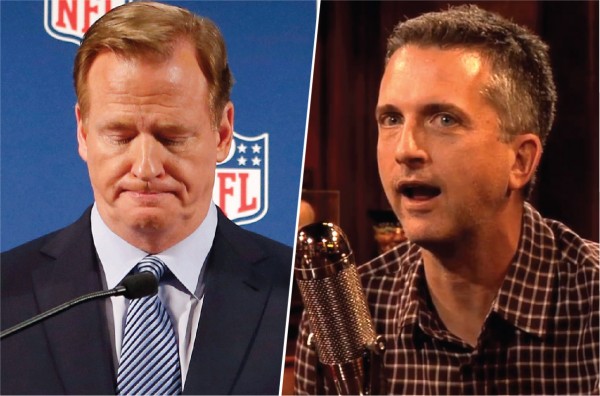 Bill Simmons stirred up a hornets’ nest when he had the audacity, read integrity, to question Roger Goodell‘s honesty about the Ray Rice video. Actually he didn’t really question his honesty. Since Simmons referred to Goodell as an outright liar, I guess there was no honesty for him to question in the first place. Simmons stated on his podcast that Goodell is lying about having not seen the Ray Rice video part two. While everyone else on the evil four letter network either avoided that possibility or skirted around saying that Goodell was being dishonest, Bill Simmons had the balls to directly say what most fans think. Most fans believe Goodell is lying about the video while others say that if he is being truthful then he is incompetent, which is almost as bad. The percentage of folks that believe Goodell acted with 100% integrity on this matter is very low.

These remarks got Simmons in trouble of course with ESPN upper management, better known as suits. He even dared them to call him out and say he was in trouble about his comments, during the same podcast episode. They obliged him and suspended him for three weeks. ESPN’s official statement read, “Every employee must be accountable to ESPN and those engaged in our editorial operations must also operate within ESPN’s journalistic standards. We have worked hard to ensure that our recent NFL coverage has met that criteria. Bill Simmons did not meet those obligations in a recent podcast, and as a result we have suspended him for three weeks.” I am aware that a big corporation like ESPN has rules for the employees and when they are broken they have the right to punish the person appropriately. It is just a shame that Simmons got in trouble for stating the obvious and it is not like he was saying something totally off the wall. As I said, Goodell is believed to be lying about this Ray Rice thing by most people familiar with the situation. As far as I am concerned, Bill Simmons went above his journalistic duties and the guidelines set by his bosses. He had more integrity than others too scared to get in the face of Roger Goodell and call him out publicly.

When things like this happen it just bolsters peoples’ hatred for ESPN. People already hate Goodell, so that is a separate matter. ESPN is the best and worst thing to happen to sports ever. We love it as it brings the sports world to so many homes and in so many formats. Without ESPN, sport television programming of 2014 looks nothing like it does currently. I remember the days of catching three minute highlight features on the local news. That was awful compared to what SportsCenter does for us with highlights and recaps. The dark side of ESPN is mainly because of its success which made it the humongous corporate entity that it is today. They are beholden to endless sponsors. They create fake debates to drum up viewers to get mesmerized with the low brow talk of personalities like Skip Bayless and Stephen A. Smith. And one of the worst indictments of the mega sports media company is that they are a lapdog for the NFL. If the NFL doesn’t want a certain narrative to get steam, they can have a word with the suits at ESPN and possibly have it quieted. We all remember how the popular ESPN show Playmakers, loosely based on the NFL, was axed suddenly. Clearly the NFL did not like the ugly picture painted by the fictional show and it was canned. I understand how partnerships work. ESPN should be concerned about the image of the NFL and its commissioner. However, ESPN is supposed to be a journalist operation. They have the duty to put out truthful commentary even when it makes a big dog partner like the NFL a bit angry. What is the NFL going to do? Stop doing projects and live games on ESPN? The network is pretty damn powerful itself.

Roger Goodell is a big boy. He is a smug, arrogant lawyer who is having to take some of his own medicine. He shouldn’t need ESPN to shield him from Bill Simmons. He is supposed to be this high integrity fellow who wanted to be the sheriff of the NFL. He was to be the judge and jury of all off the field problems that came up. This role is what he desired so he could rule the NFL with an iron fist. He was doing just that when Ray Rice went barbarian in an elevator and Goodell decided that he shouldn’t be too harsh on the Ravens running back. That is where he really screwed up and then made it worse when he made it clear he had never seen the second video. He was then made to look a fool by a TMZ reporter who said a simple phone call was all it took to get a copy of the casino elevator footage. Goodell has since been chastised by several female commentators and womens’ groups. Bill Simmons just happens to be the journalist who took it next level and bluntly accused the man of being a low down liar.

I couldn’t be more impressed with the boss at Grantland. He could have made his point about Goodell without getting in hot water. A little zigging and zagging with the right words could have conveyed his disgust with ole’ Rog without using the word liar. But that would have been the easy path….the one most commentators took. Simmons is not your run of the mill journalist. That is part of the reason that ESPN gave him his own platform at Grantland. He separated himself from the pack long ago with his unique approach to sports writing. The suits at ESPN would do well to remember that their job isn’t to shape the message to please the NFL and Roger Goodell. They need to remember what journalism is all about instead of trying to please their most important partner. Hardcore sports fans already hate the corporatism of ESPN. Suspending Bill Simmons for saying what the guys at the office water cooler and on the construction sites were already saying, just makes ESPN look bad. Hurting their own image to protect Goodell makes little sense to me. #FreeSimmons

Check out the audio of Simmon’s remarks about the liar / commish below.