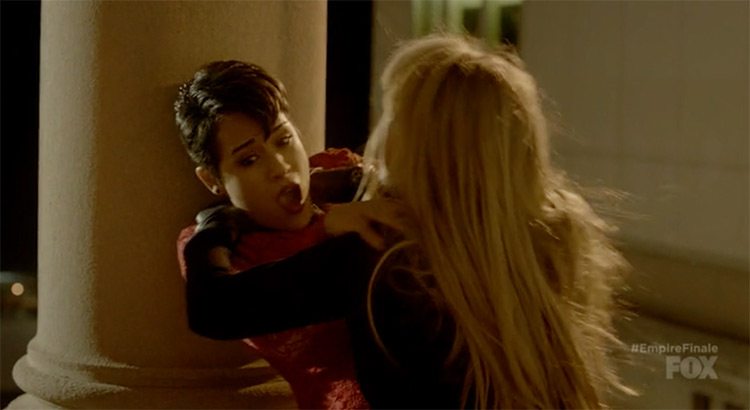 Jamal is out of the hospital on the season finale of Empire; somebody gets married, and Anika falls off the side of the building. Or maybe it’s Rhonda. We won’t know until the Fall premiere. Here’s how it all goes down.

Hakeem and Laura finalize the details of their wedding. Everything is in place, but her parents have hesitations about their daughter marrying into the Lyon family. Honestly, do you blame them? 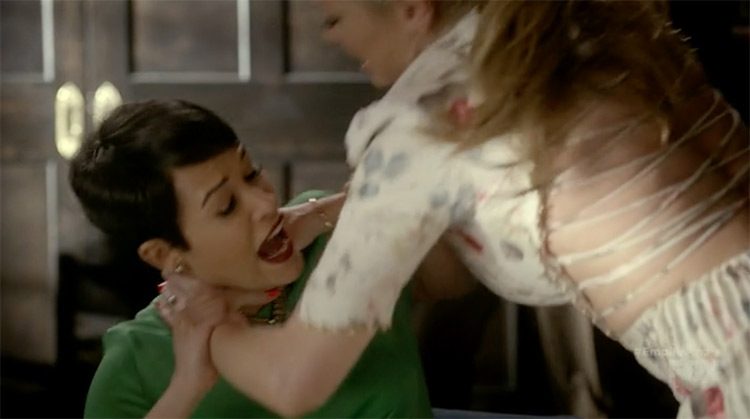 Rhonda lets Anika and the family know that Boo Boo Kitty pushed her down the stairs. She walks into Lucious’ office and punches the mom to be right in the face. Now I am not one for violence, and definitely not for hitting a pregnant woman, but she had that coming. Rhonda declares to everyone in the room that Anika is the reason she lost her baby, but nobody believes her. Not even Andre. She is so through with everything that she leaves. 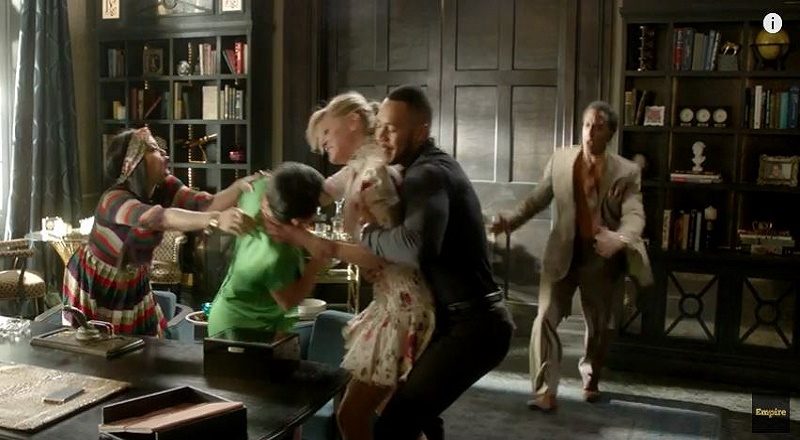 Speaking of Anika, I don’t know if this chick is a psycho or if she truly feels like she might go down in the whole FBI investigation. Either way, she attempts suicide at Empire by threatening to jump off a balcony. Everyone rushes to her in a bid to talk her out of it. Surprisingly enough the person able to do so is Cookie. 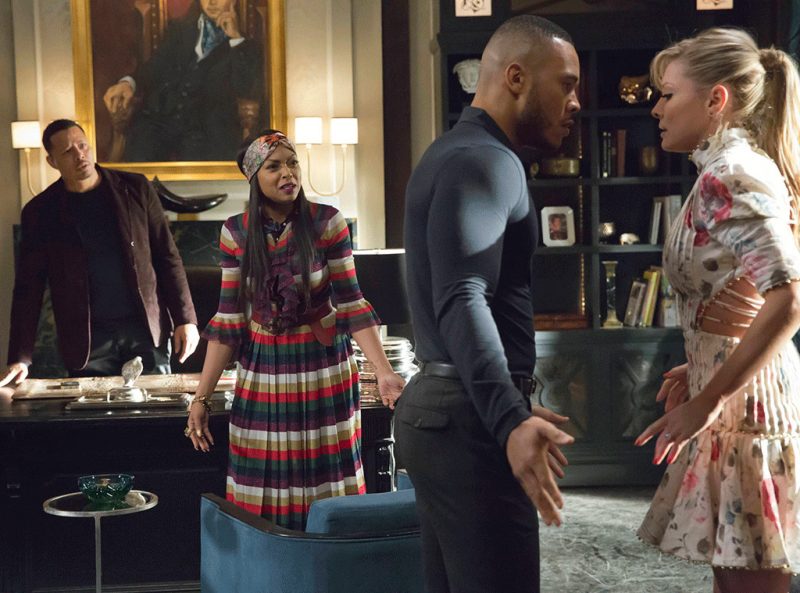 Jamal tells his family that he’s done with singing. Lucious doesn’t buy it and does what he does best to make sure his son continues making him money- manipulation. He visits Freda in prison and tells her he had nothing to do with her father dying. He also lets her know that the chance he gave her was due to the history he and her dad had growing up on the streets. She believes him and by the end of his visit, she’s spitting lyrics over a track that Lu later gives to Jamal. Also, it looks like D Major is back in the picture. While Jamal practices his song for Hakeem’s wedding, the music producer shows up at the studio. Jamal is cordial to him, and there is no mention of their last encounter in which he pushed the singer off of him when Lucious walked in on them. 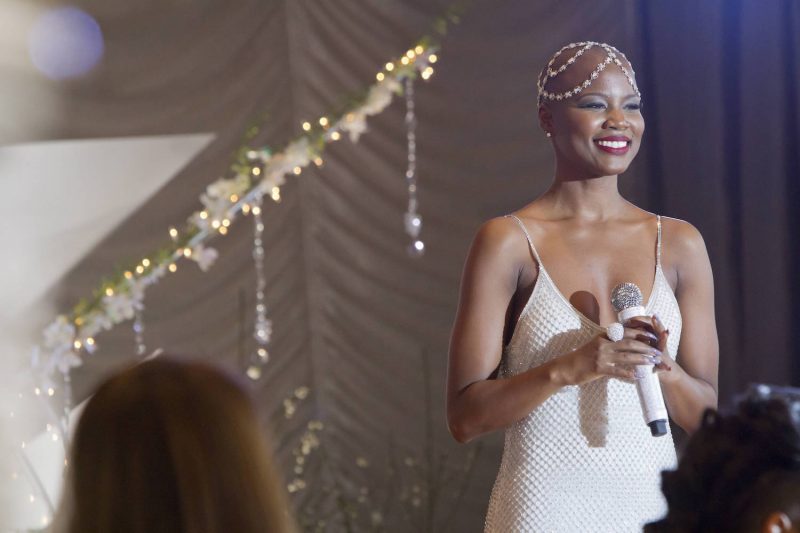 Cookie and Lucious’ sexual tension proves to be more than just heat. They genuinely love each other, and both of them show it when no one is around. But they don’t have time for the lovey-dovey stuff as the Feds are zoning in on them. To make sure they have their strings tied, Cookie visits Shine, one of their old partner’s in crime. She talks him into staying quiet in exchange for a publishing deal for his nephew. He also wants an invite to Hakeem’s wedding. She reluctantly obliges.

Ah yes, the wedding, an extravagant event. Everyone is there, and everyone looks amazing. Before the ceremony starts, the groom and his family greet the guests, one of which is Rosey, another former business partner.

The beginning of the end happens when Shine shows up with hookers and causes a slight disturbance. Rosey pulls Lu and Cookie to the side and lets them know that Shine is going to be a problem. Moments later when the ceremony starts, right before Laura walks down the aisle, Anika (why is she there again) is served a subpoena by a server who forces them in her hand and jets. On her way out, a brawl ensues, and Shine is caught up in it. He is escorted out right past Laura and her parents who view Hakeem and his people as a bunch of thugs. She tells him, “It’s not okay anymore Hakeem I can’t,” and they leave. The young Lyon is devastated.

Lucious kicks everyone out and does the unthinkable- marries Anika! Yes, this girl not only has the heir to the throne growing in her womb, but she is also now officially a Lyon. Lucious says it is the only way to make sure she can’t testify. Now to say that Cookie is against the plan is an understatement. “There has to be some other way,” she pleads. You can see the hurt and disappointment all over her face. She tells her boys, “Ya’ll know I love you right, and Imma do whatever I can to save my family, but me and your daddy… I can’t do this.” Scene switch to Lucious and Anika tying the knot in front of the remaining guests. Afterward, as they walk out, Lucious tells his new bride, “I know you pushed her.” Anika excuses herself to a balcony for some air. 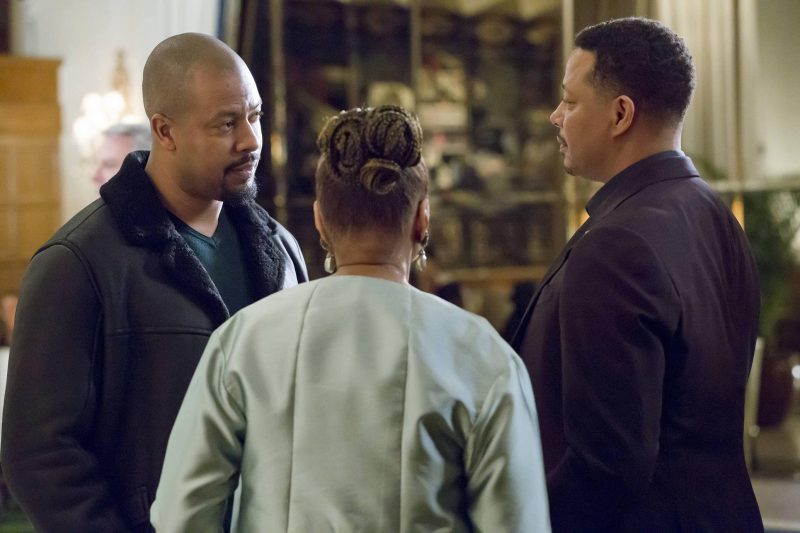 In the end, we find out that Tariq the Freak is… are you ready for it… Lucious’ half brother. It seems that his father Joe “was a good cop but a bad man.” And then one of the biggest scenes of the night takes place- the fight. Rhonda comes out of nowhere (she was supposed to be in L.A.) and grabs Anika. They struggle on the side of the building. As they do so, Andre walks out, sees what’s happening but is too late. Someone, from what we hear, goes overboard. 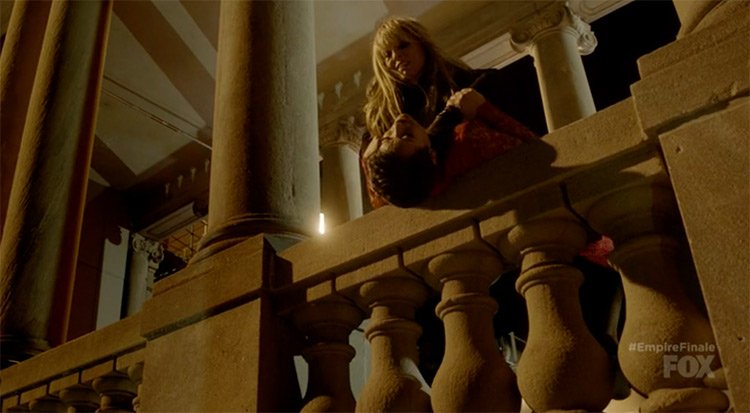 We have to wait until September to know who it is. My money is on Rhonda if someone actually did fall. It just makes more sense story wise.

Until then good people, stay lifted. 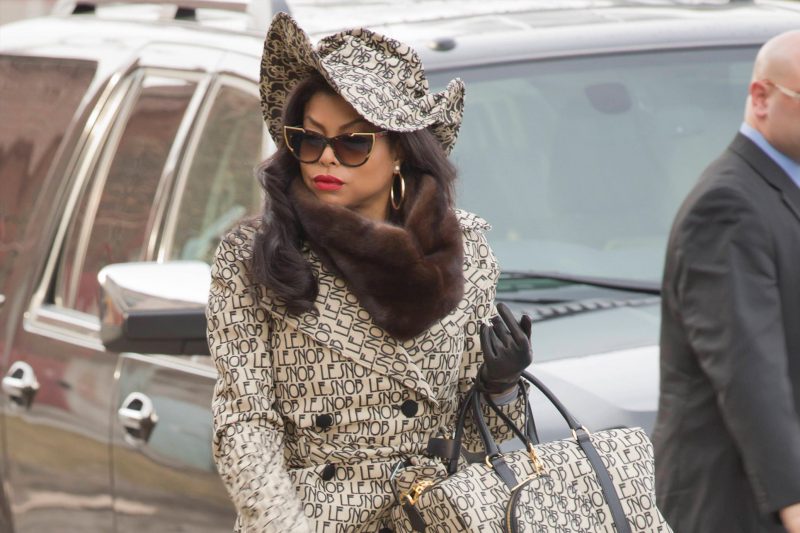 “Empire’s” showrunner Ilene Chaiken gives some clues on what to expect in Season 3 of the show with maybe a hint or two on the fate of Anika and Rhonda.

We don’t know who died, but Rhonda is either dead or just murdered someone. How will that affect Andre?

Andre just witnessed someone plunging to her death and whoever it was is obviously going to determine how Andre goes forward with his life.

Whoever died, are they completely off the show or could they come back in flashbacks?

I can’t answer that.

Does the cast know who dies?

They know some things. They don’t know everything.

Lucious and Anika got married so that she wouldn’t have to testify — if she isn’t dead, what’s their relationship going to be like?

Lucious and Anika were barely tolerating one another and were forced into a twisted marriage of necessity. With Anika pregnant with Lucious’ grandchild, should Anika survive, that would be a pretty twisted situation.

Will Cookie be able to turn a blind eye and realize Lucious and Anika’s marriage was for the benefit of her family?

Season 3! Come back to find out. What I will say is that Cookie and Lucious fell back in love with one another and more or less declared their intentions and Cookie was on the brink of what looked like real happiness.

If Anika dies and the baby is gone, how will the family deal with the loss of a Lyon heir?

The family will react to that.

Lucious really didn’t know he had a half-brother and that it’s Tariq?

Lucious didn’t know he had a half-brother. His mother did know it. That is going to be the beginning of a complicated family story for Lucious. Clearly Tariq isn’t just a fed. He’s someone with a very personal stake in taking Lucious down.

That is a huge, unexpected twist – did anyone see that coming?

That moment when we were shooting the scene and Terrence Howard was starring at his half brother and new nemesis and the air just crackled with tension.

Laura left Hakeem at the altar. Are they done for good or is there a chance he can get her back?

I doubt it. Her parents just pulled her out of there like, “We never want to see you people again.” Hakeem has just endured blow after blow, humiliation after humiliation and I think this must be the final straw for him. He’s stripped of dignity, loss of love and public humiliation.

Will Lucious’ mom be back for Season 3, and will people find out she’s Lucious’ mother?

You can expect Leah to be a big problem for Lucious in every way in Season 3 with all of those entanglements and her animus towards him obviously driving a lot of her unpredictable behavior.

Last week, Jamal was shot. Will that continue to impact him in the new season, or will he be fully recovered when the show is back?

Jamal’s recovery is just beginning. Jamal was shot. He suffered a devastating physical injury and an emotional injury that we’ve only just begun to see the effects of. You saw that he came out of the hospital in a very fragile state, vowing that he wants to end this cycle, and I would say that at the end of the episode, that determination is crystallized after everything that’s happened.

Have you mapped out Season 3?

Let’s say that we definitely are going to answer the question of who dies at the top of the season, and we’re going to set our stories in motion in a very dramatic way. In the finale, we set the table for a challenge to Empire and the Lyon family that’s going to serve as the framework for the whole of Season 3, with a “Godfather” style opus of crime and hip hop that has Lucious as the beleaguered kingpin battling back this federal investigation led by a man with a personal grievance, and thug rappers who helped him to build his Empire and are now coming back for their pound of flesh.

How will the finale cliffhangers set up the next season?

What I really want to say is it just invites us into a whole new world of storytelling. Our third season is really going to be grounded by these stories that we’ve already begun. We don’t feel the need to reach to extreme places for our stories because we feel like we have so much great story with the family and the threads that are already set in motion.

We’re telling our story now. We have a very big story. We set the table in this finale for a very big story that’s going to unfold over the course of the season. We’re not jumping through any hoops for guest stars. We’re telling stories and there will be guests on the show who come to play parts that are required in order to tell those stories.