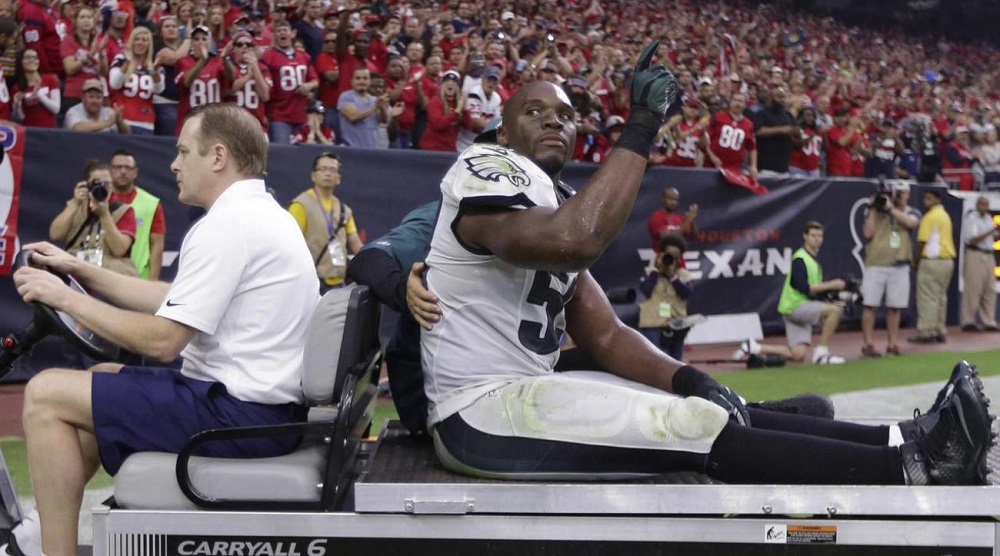 Former Houston Texans and Philadelphia Eagles linebacker DeMeco Ryans has filed a lawsuit against Harris County Convention Sports Corporation, stadium management company SMG, the Houston Texans, and the National Football League over a torn Achilles tendon he suffered while playing with the Eagles at NRG Stadium in Houston on November 2, 2014.

Since the injury, DeMeco played 14 games with the Eagles in 2015, but he is currently a free agent and has not drawn much interest from teams.

Ryans’ lawsuit draws attention to a field that has received much criticism in the past for unsafe conditions. NRG’s field is made up of grass grown in 12×12 metal plates and placed together often right before the game, leaving visible separations and holes that have many times been blamed for knee and leg injuries.

In 2010, New England Patriots head coach Bill Belichick blamed the poor layout of the field for a torn ACL suffered by Wes Welker.

The game in which Ryans ruptured his Achilles also saw an injury to Texans running back Arian Foster—both injuries resulting from the poor field conditions.

“I think it’s actually a pretty dangerous playing surface,” said Eagles center Jason Kelce after the game. “I don’t really understand, like, what the deal with it is. But it definitely is uneven, and it definitely doesn’t feel very good.”

2014 No. 1 Overall Draft Pick Jadeveon Clowney reportedly blamed a hole in the turf for his meniscus tear.

“It’s always been like that, man,” said cornerback Cary Williams who had played his fair share of games in Houston. “I’m sure the league evaluates it. If they deem it safe to play as players, then it’s deemed as safe. But I don’t like it; I’ve never liked it.”

With the league so concerned about injuries, especially recently, it’s amazing that this problem field is allowed to host games. Maybe this lawsuit will prompt the league to step in and change things.