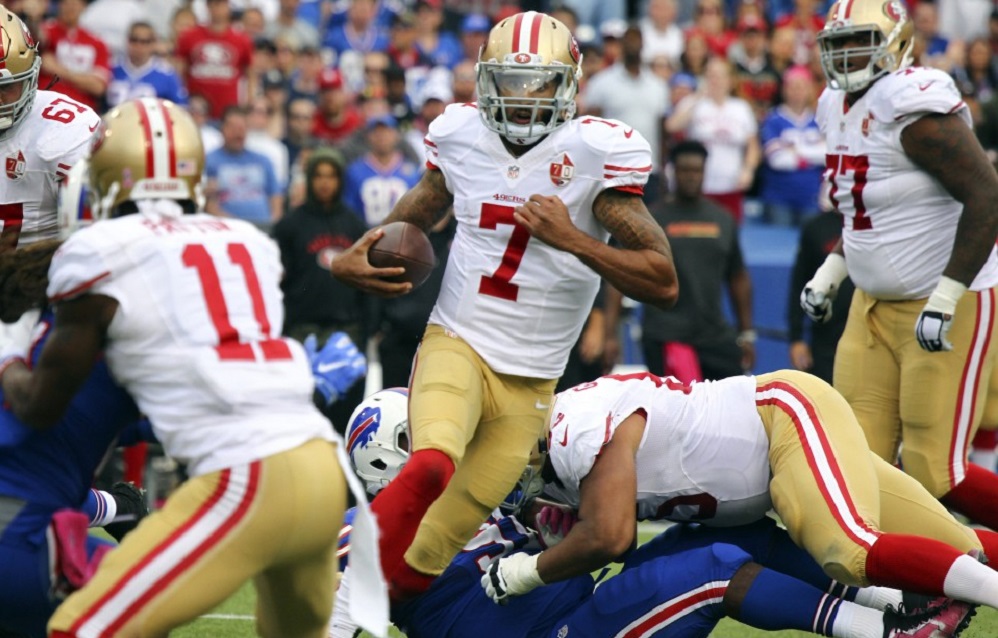 Fans and conspiracy theorists came up with reasons why San Francisco 49ers coach Chip Kelly chose to have Colin Kaepernick play against the Buffalo Bills, but as many expected, things blew up. Many noticed that the 49ers had similar problems under Kaepernick that they had under Blaine Gabbert.

Colin Kaepernick didn’t feel extra nerves, hear the boos or concern himself with the disparaging T-shirts being sold outside the stadium while making his season debut as the 49ers starting quarterback on Sunday.

After kneeling during the national anthem to continue his protest against racial oppression and police brutality, Kaepernick said he focused his attention solely on beating Buffalo. 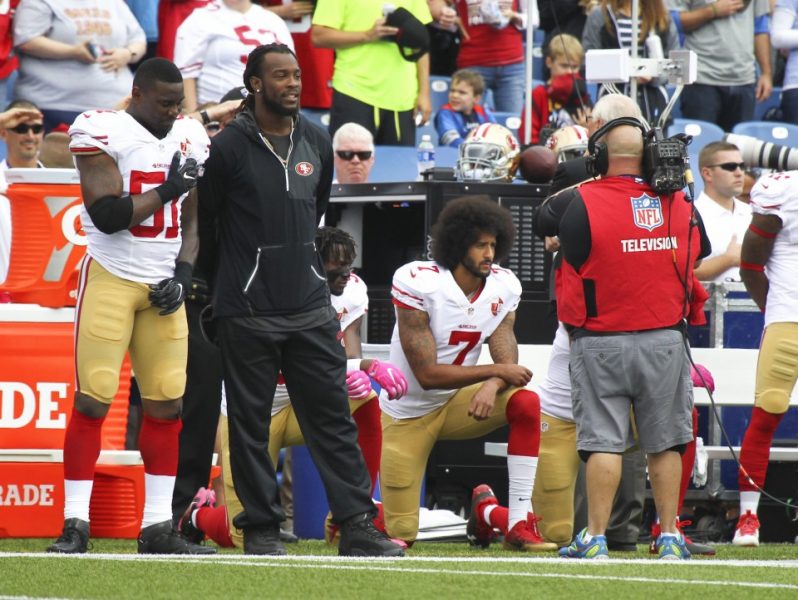 “I really wasn’t listening to what was going on in the stands,” Kaepernick said. “It felt good to be out there and give my team the opportunity to win.”

The offense looked better at times under Kaepernick but still could not finish drives. That was the same problem the 49ers had with Blaine Gabbert, who was benched this week.

Kaepernick went 13 of 29 for 187 yards and a 53-yard touchdown pass to Torrey Smith. But the 49ers settled for three field goals, twice gave up the ball on downs and punted once on six drives that crossed midfield.

“I thought he was OK,” coach Chip Kelly said in assessing Kaepernick’s outing.

And Kelly wasn’t in a position to commit to who will start next weekend when San Francisco hosts Tampa Bay.

Kaepernick wasn’t ready to say whether he’s earned that opportunity either. 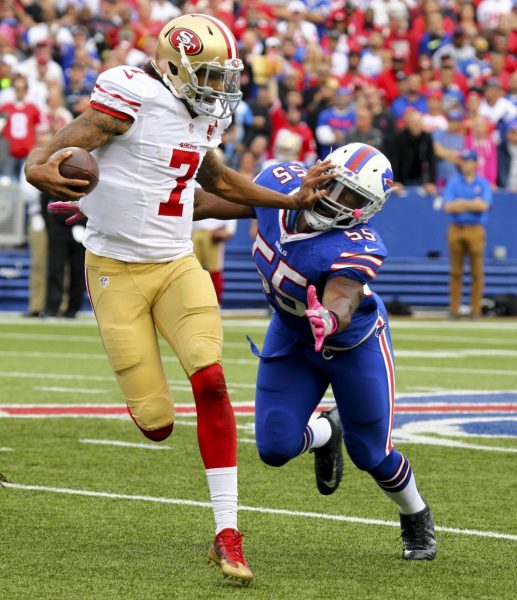 “That’s not for me to say,” he said after making his first start in nearly a year. “I went out there and played as hard as I could and gave this team everything I had. I will continue to do that every week they let me.”

What’s not going to change is Kaepernick continuing being the focus of national attention because of the protest he during the preseason.

On Sunday, he took his familiar spot in kneeling along the sideline at the 50-yard line, alongside safety Eric Reid and linebacker Eli Harold. Not far to his left were cornerback Rashard Robinson and safety Antoine Bethea, who stood with their right arms raised.

Kaepernick said he didn’t hear them, but also wondered why his stance was regarded as unpatriotic.

“I don’t understand what is un-American about fighting for liberty and justice for everybody,” he said.

And he was unfazed upon learning of two T-shirts featuring his image being sold outside New Era Field.

Shirts with a rifle scope trained on Colin Kaepernick selling for $10 outside of Ralph Wilson stadium. pic.twitter.com/bSuxF3G5qq

One read: “Wanted: Notorious Disgrace to America,” and featured a picture of Kaepernick throwing a pass and a bullseye aimed at his chest. Another featured a drawing of a kneeling Kaepernick with the words, “Shut Up and Stand Up!” printed.

“Like I’ve said from the beginning, I knew the consequences of what could come from this and I was prepared for that,” said Kaepernick, who arrived at the stadium wearing a T-shirt with Muhammad Ali on it.

Kaepernick was heartened to learn a group of about 25 Bills fans held a rally outside the stadium in his support.

Protests and performance aside, the 49ers’ troubles go beyond who’s playing quarterback after they dropped their fifth consecutive game.

San Francisco’s run defense has now allowed a combined 981 yards and nine touchdowns in its past four games.