There was a lot of DraftKings news this week, with The New York Times seemingly making it their mission to paint daily fantasy sports as the devil incarnate.

My personal DraftKings news was bad, losing out on most of my contests and wasting a few bucks. I did win 3/5 head to head matches even on a bad week.

I monitored the DK Millionaire Maker once again, checking in on the Sweat Show to see who was in contention for a life changing payday.

With a stinker of a Monday night game between Cleveland and injury riddled Baltimore, much of the top part of the field in the Millionaire Maker had no PMR (player minutes remaining). Who wanted to take a bunch of backups or Cleveland’s mediocre regular starters?

There were a couple of top guys that had MNF ballers left on their roster. Bstew21 sat at 30th place with  running back Javorius Allen left andWakeyWakey was at 19th with the Browns defense / special teams yet to go.

Watching the Sweat Show I heard WakeyWakey mention that he’s been putting up a couple hundred entries each week. If all those were in the Milli Maker, then that’s 200 x $20, equaling $4,000 a week! Dude must be getting free entries by referring friends and strangers as well. Obviously not many players can afford that kind of loss each week.

The winner of the top prize of a cool million was keasy who probably slept in this morning. He racked up 256 points by featuring Russell Wilson and Doug Baldwin, two stacked outliers that less than three percent of the field was drafted.

Guessing right on the week that Seattle’s passing game lights up the scoreboard is pretty damn lucky! Wilson was on six of the top seven rosters in the Milli Maker.

Congrats to keasy. His lineup is below. 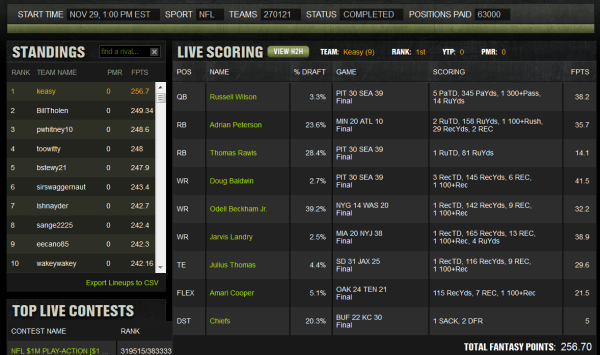 It looks like DraftKings and FanDuel are trying to stay more low key with many ads toning down the hype, showing smaller winners and even promoting smaller head to head contests in some radio ads. This could be a move to help them in court to convince judges that these companies don’t promote unrealistic results by the average player.

Week 12 NFL big money tournaments saw a drop in entry fees on both DK and FD.  That could be a sign that casual users may be getting wary of playing a game that is facing more legal troubles each week. The more likely reason is that with fewer ads running, the momentum of DFS has fallen off a bit.

There was no way to keep that spiking interest going forever. It’s better to grow the industry a little more naturally anyway. The type of players solely influenced by a TV ad are the same types that could be influenced by ambulance chasing lawyer ads on daytime TV. We don’t need more class action lawsuit participants. We need DFS players who enjoy the game, not ones willing to sell their soul to get $22 in a class action settlement.

The most interesting news item involving daily fantasy sports came again from New York. The New York Times ran an article last week that was meant to show the DFS industry to be a danger to gambling addicts.

Joshua Adams is the poster boy for the piece, highlighting the dangers of daily fantasy sports for those addicted to the high of chasing fast money that can come from gambling.

Mr. Adams’ story is pretty sad. It’s the usual theme of tens of thousands of dollars wasted, lies to borrow money from family, and an eventual rock bottom awakening. Adams is now recovering from his gambling addiction but had this to say about the TV spots. “That’s one thing that bothers me — when they say this year FanDuel is paying out over $200 million,” he said. “They leave out what they’re taking in. They don’t say that there are going to be more losers than winners.”

Wow, what a revelation. The company is taking in more money than it is spending. That’s called trying to make a profit. It ain’t the red Cross son!

Of course, there are more losers than winners. Most people who play on DK or FD understand this math. If not then they would waste their money on other stupid activities anyway because a fool and his money are not compatible.

I’m glad Joshua Adams is getting his life back together. I am aware that many others are addicted to gambling and that daily fantasy sports could harm these folks. Problem is I don’t see why that should affect me playing a few dollars a week just for the hell of it.

The Times article points out that Adams was also making bets with illegal bookies that were easily found. So how is stamping out FanDuel and DraftKings going to help gambling addicts when they can just call five different guys in their town to make a straight up sports bet?

I’m sure the writers of this addiction piece are truly concerned about those affected by gambling issues. But they seem pretty naive about how to help those folks. They make a point about DraftKings and FanDuel opting not to put a 1-800 gambling help line on their website. Then take it a step further to condemn DraftKings linking to the National Center for Responsible Gaming. The article points out that organization is partly funded by the casino industry.

But so is New York’s attorney general.

I do have sympathy for addicts. It’s easy for you or I to say they should just stop doing meth, smoking cigarettes, drinking, or gambling their paychecks away in various manners. If it were so easy to stop these addictive behaviors, then wouldn’t they just stop? Nobody wants to walk around looking like a meth head or go hungry because they chose $120 worth of scratch off tickets over groceries.

That said, people have to be accountable. I haven’t lied to my parents about needing a new roof to borrow money for fantasy football like Mr. Adams did according to the NY Times piece. That’s on him.

There are regulations that could help the DFS industry’s image and I’m all for that. Putting a gambling help hotline on all DFS websites is fine and might even actually help a few people. Just know that when New York first put such an 800 number on their lottery tickets, the hotline often got calls from lottery players wanting the winning numbers from the previous night or advice on bettering their odds.

That example should show that some gamblers are too ignorant to even be allowed to carry around money and can’t be helped.

As for DFS being a trap for addicts. It’s true for a small percentage of players. But there are addiction traps all around us, yet cigarettes remain totally legal. Alcohol is available on every corner along with lottery options in most states.

Yes daily fantasy sports can be a problem for the few. But for those people  focusing in on this one relatively harmless industry, maybe they should take a look at the other examples of addiction I’ve mentioned.

We’ve got much bigger addiction issues with which to occupy our time and energy.