It is official. This presidential race is out of control. It has been for a while now but if there ever were any doubts about it, last night’s Hillary Clinton vs. Donald Trump debate confirmed it for sure.

Everything is laughable at this point, and it’s really a shame. Hillary Clinton is clearly the only adult in this situation taking things seriously. Well, for the most part. She too falls victim to the absurd thanks to Trump’s immature, small ways that reel her in every now and then. Last night was a circus, and I for one do not think Chris Wallace did a good job as a moderator. Neither candidates respected him, which was easily seen by the fact that they repeatedly ignored his attempts to get the debate under control. I mean, at one point, he even laughed at something Donald Trump said. I can’t be too mad at Wallace anyway because laughable is exactly what last night was.

The main component of this election that serves as the catalyst for the unbelievable is Trump. We all know that. But this man was in rare form last night, and I don’t mean that in a good way. Here are the most unreal things Trump said during his last official chance to show the world he can handle the job of President of the United States. Spoiler alert, he failed. 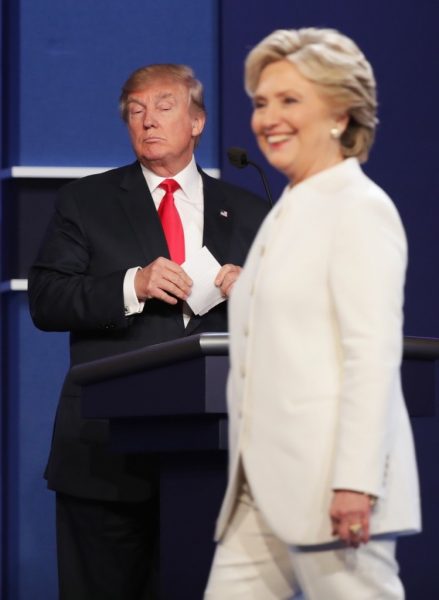 In the final debate, Donald had what many are saying is the best start out of all his debates. But per usual, his good beginning didn’t last. One of the most mouth-dropping moments was him calling Hillary Clinton a “nasty woman.” It was his response, which was not asked for by the way when she made a jab at him about getting out of paying taxes. Her campaign’s tweet sums this moment up perfectly,

“Nobody respects women more than me.” —Donald Trump earlier tonight

Another thing Trump said that had and still has a lot of people’s heads reeling is that a woman can get an abortion as late as her ninth month. In his attempt to passionately communicate his stance on abortion, he kept saying that doctors can just rip a baby from the mother’s womb if she decides she doesn’t want the baby, even if she is “three or four days” away from delivering. This assertion is so far fetched that it is hard to believe that even Trump believes it. 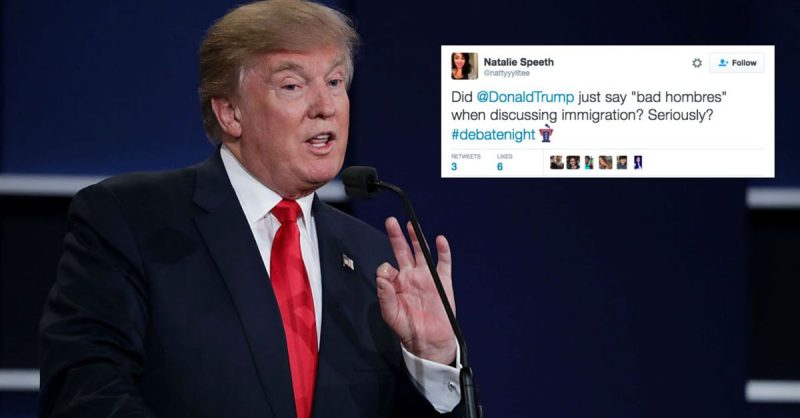 Probably the most offensive and cringe-worthy thing out of Trump’s mouth last night was his “bad hombres” remark. He goes from saying that he has a plan to benefit and help struggling black and brown folks to saying, not so subtlety, that the issues America faces by way of crime are due to some “bad hombres” which in Spanish means “men.” 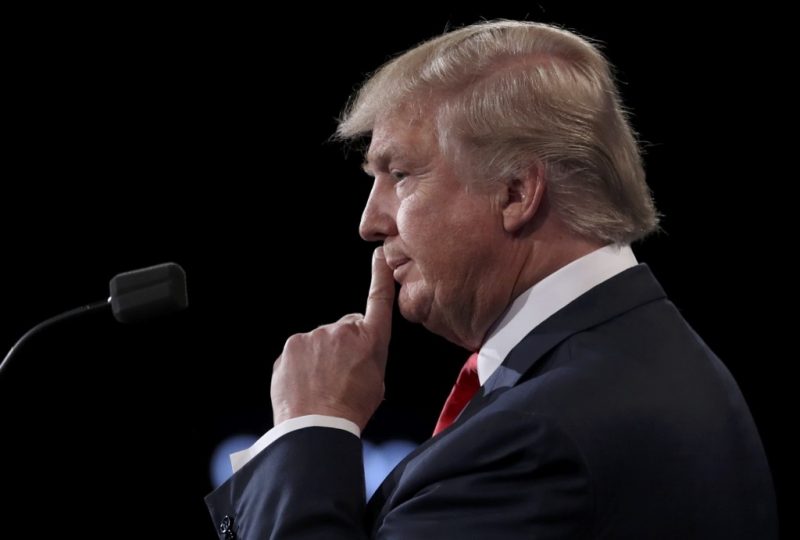 This moment is in my top three of most laughable. When asked by Chris Wallace if he would peacefully concede in the event the polls show Clinton will get the votes, he makes the grand announcement that he’ll keep us all “in suspense” as to whether or not he will go quietly. His exact words were,

This is yet another indication of his self-centered ways. I mean to think that he won’t accept what’s clearly in front of him as others in his position has done in the past is appalling. He thinks he’s the exception to the rule.

Some of the other things Trump said that just wasted time were that he’s not a friend of Vladimir Putin and he would definitely get rid of NAFTA. He also kept mentioning Bill Clinton and his “failures.” All smoke screens and potentially bad judgment calls.

Now when it comes to Hillary Clinton, not only did she come out in her white cape, gladiator (Scandal reference) power suit, she delivered a devastatingly accurate “read” to Donald Trump. When he once again mentioned that the media and the Clintons have rigged the election, Hillary, seemingly having had enough, stated what all of us are thinking.

This was a great, accurate and much-needed reality check for Trump and his followers.

At this point, I am glad the debating portion of the presidential run is over. We still have about three weeks left before the election, which means three more weeks of mudslinging. 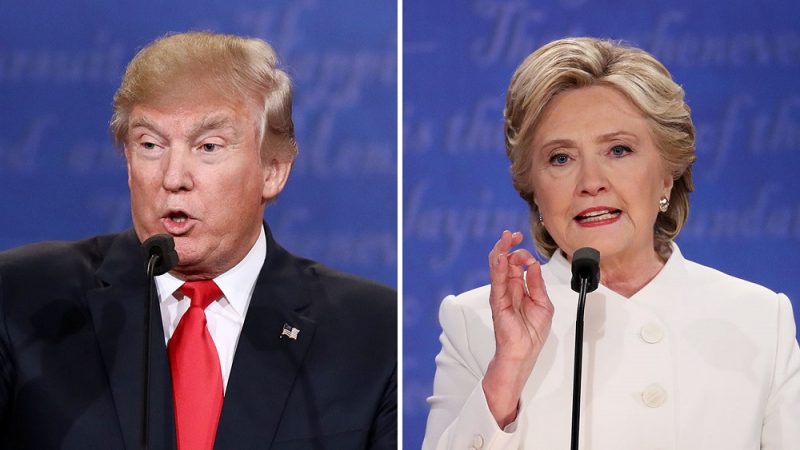 We did an extensive Fact vs. Fiction on Donald Trump and Hillary Clinton’s claims during the third and final debate but here’s more.

One more time on Obamacare: Trump repeated his claims that insurance premiums under the Affordable Care Act will go up 60, 70, and 80 percent. But an analysis by Factcheck.org found that he was cherry-picking his stats.

Trump again cherry-picking with the claim that ACA premiums are going up 60, 70, 80%. https://t.co/aroIK2HxS0 #debatenight

Clinton failed to keep troops in Iraq? Not quite: Trump criticized Clinton during the debate for failing to keep U.S. troops in Iraq, paving the way for the Islamic State to flourish in the region. The claim’s largely false, PolitFact found: It overemphasizes Clinton’s role as secretary of state, given that most of the critical decisions occurred between the White House and Iraqi leaders. The White House wanted to keep American soldiers free from legal action in Iraq, PolitiFact notes, and didn’t simply step away from a deal to keep troops in the region.

Debt vs. budget deficits: Clinton said that when her husband, Bill Clinton, was president, the country’s $300 billion budget deficit turned into a $200 billion surplus. That’s correct. But she went too far by adding “we were actually on the path to eliminating the national debt.” The New York Times points out the nation was nowhere near eliminating federal debt — the accumulated total of past borrowing. Debt held by the public totaled $3.4 trillion at the end of 2000.

The rise of ISIS: Trump has said in several debates that Clinton and Obama are responsible for the collapse of Iraq and the rise of ISIS, in part because they withdrew U.S. troops from Iraq and left a power vacuum. Discussing the on-going battle for Mosul, Trump said, “we had Mosul” and then “she took everybody out.” But Trump was once in favor of removing US troops from Iraq.
This from FactCheck.org in August: “Furthermore, Trump himself supported withdrawing troops from Iraq as early as 2007, telling CNN in a March 16, 2007, interview that the U.S. should “declare victory and leave because I’ll tell you, this country is just going to get further bogged down. … This is a total catastrophe, and you might as well get out now because you just are wasting time.”

Rigged elections and voter fraud: Trump says his claims of voter fraud are backed by a Pew Center study that estimates nearly one in eight voter registrations are inaccurate. But the report found no evidence of voter fraud, only an outdated record system.

The $6 billion question: Trump said that while Clinton was secretary of state, the State Department somehow lost $6 billion. Clinton says that was not true and has repeatedly been “debunked.” Here’s what the debunking website Snopes.com had to say about this old claim: Mostly false.
In 2014, the State Department inspector general issued an alert saying the paperwork on $6 billion in contracts hadn’t been properly accounted for. The IG issued a statement saying, “Some have concluded based on this that $6 billion is missing. The alert, however, did not draw that conclusion. Instead, it found that the failure to adequately maintain contract files — documents necessary to ensure the full accounting of U.S. tax dollars — ‘creates significant financial risk and demonstrates a lack of internal control over the Department’s contract actions.’ ”

The not-so-gold standard: Trump played fact-checker when he stated Clinton once called the Trans-Pacific Partnership the “gold standard.” The record shows she indeed did say that before announcing last week she no longer supports the international trade deal.

Deporter-in-Chief: Trump made a point of mentioning that President Obama has deported “millions and millions of people.”
He’s right. Obama is sometimes referred to as the “deporter-in-chief” by his critics. According to an ABC News report, “between 2009 and 2015 his administration has removed more than 2.5 million people through immigration orders, which doesn’t include the number of people who ‘self-deported’ or were turned away and/or returned to their home country at the border by U.S. Customs and Border Protection.”

LIVE FACT-CHECK: Clinton doesn't believe all abortion should be legal, as Trump said “on the final day.” https://t.co/bGqldJJxNe pic.twitter.com/NiZsJ45Jx2

Clinton’s stance on late-term abortion: Trump said his rival supports all abortion, even on “the final day” of pregnancy. PolitiFact’s analysis of Clinton’s remarks on the topic don’t support that claim.

LIVE FACT-CHECK: There are 90 gun deaths a day, or nearly 33,000 a year, as Hillary Clinton said. https://t.co/gv3FJNUF6m pic.twitter.com/pwtfOn6tlD 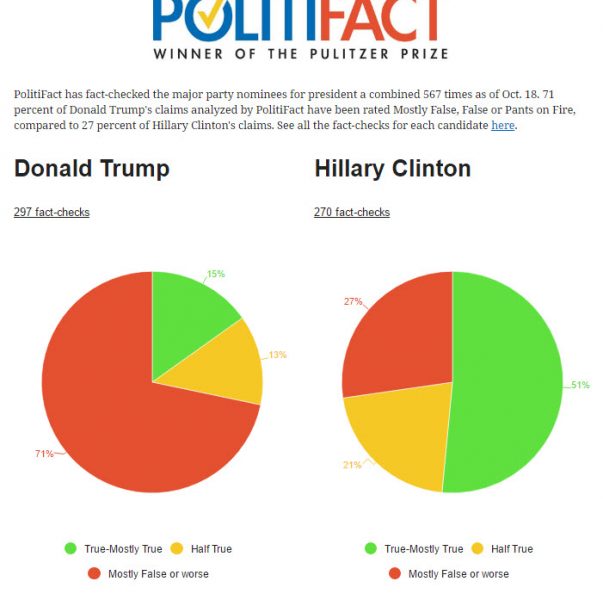 Liar, liar … PolitiFact fact-checked Clinton and Trump a combined 567 times heading into tonight’s debate. How do they fare? More than 70 percent of Trump’s claims have been rated Mostly False, False or Pants on Fire, compared to 27 percent of Clinton’s.