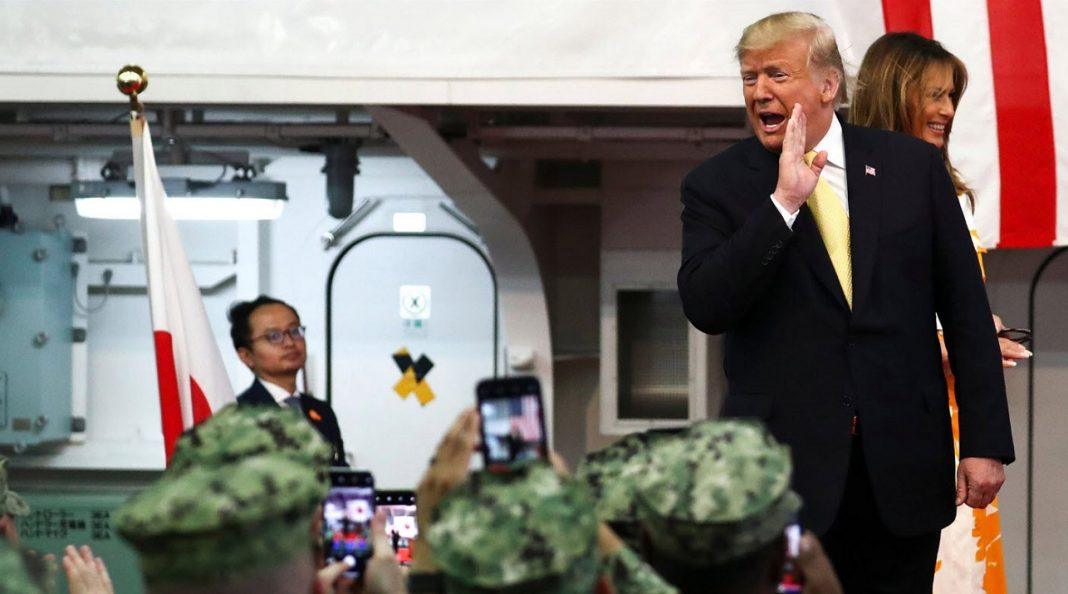 Donald Trump used Memorial Day to make some rather large but untrue claims, even stating that we’re not just ready to go to the moon again, but Mars. Both he and his Veterans Affairs secretary are now taking full credit for health care improvements that were made during the Barack Obama administration. Trump has gotten to if he can’t tear down what Obama created, he’ll just take them over.

Trump said he passed a private-sector health care program, Veterans Choice, after failed attempts by past presidents for the last “45 years.” That’s not true. The Choice program, which allows veterans to see doctors outside the government-run VA system at taxpayer expense, was first passed in 2014 under President Barack Obama.

Trump’s VA secretary, Robert Wilkie, also is distorting the facts. Faulting previous “bad leadership” at VA, Wilkie suggested it was his own efforts that improved waiting times at VA medical centers and brought new offerings of same-day mental health service. The problem: The study cited by Wilkie on wait times covers the period from 2014 to 2017, before Wilkie took the helm as VA secretary. Same-day mental health services at VA were started during the Obama administration.

The half-truths and exaggerations came in a week when selective accounting was a norm in Trump’s rhetoric, extending into his trip to Japan, where he inflated the drop in the U.S. unemployment rate for women.

A closer look at Trump’s latest round of facts:

TRUMP: “We passed VA Choice and VA Accountability to give our veterans the care that they deserve and they have been trying to pass these things for 45 years.” — Montoursville, Pennsylvania, rally on May 20.

THE FACTS: Wrong. Trump is not the first president in 45 years to get Congress to pass Veterans Choice; Obama did it in the wake of a scandal at VA’s medical center in Phoenix, where some veterans died while waiting months for appointments. The program currently allows veterans to see doctors outside the VA system if they must wait more than 30 days for an appointment or drive more than 40 miles (65 kilometers) to a VA facility.

Trump did expand eligibility for the program. Now, starting June 6, veterans are to have that option for a private doctor if their VA wait is only 20 days (28 for specialty care) or their drive is only 30 minutes.

Still, VA’s top health official, Dr. Richard Stone, described the new program’s start to “almost be a non-event” in testimony to Congress. That’s in part because wait times in the private sector are typically longer than at VA. In 2018, 34 percent of all VA appointments were with outside physicians, down from 36 percent in 2017.

Also key to the Choice program’s success is an overhaul of VA’s electronic medical records to allow seamless sharing of them with private physicians, a process expected to take up to 10 years. Wilkie has said full implementation of the expanded Choice program is “years” away.

WILKIE: “The first thing I did was change out the leadership at VA. … (The president) also allowed me to change out leadership in the VA centers. If someone wasn’t walking the post, getting to know the people who work for her or him, or getting to know those veterans, they had to leave. And, as a result, the Journal of the American Medical Association this year said that our waiting times are now as good or better than any in the private sector.” — interview Thursday with Fox News.

THE FACTS: It’s true that a study by the medical association came out in January that found wait times at VA medical centers on average were better than the private sector. But the improvement wasn’t a “result” of anything that Wilkie did: The study involved a period largely covering the Obama administration — and before Wilkie became acting VA secretary in late March 2018.

In fact, in a VA press release in January announcing the study’s results, Wilkie credits the department’s “concerted” effort to improve access to care “since 2014.”

It found that in 2014, the average wait time at VA medical centers was 22.5 days, compared with 18.7 days in the private sector, which was not statistically different. By 2017, the wait time at VA improved to 17.7 days, while increasing to 29.8 days for private doctors. Wait times at VA medical centers were shorter in all specialties except orthopedics.

According to the study, the number of patients seen yearly in VA increased slightly between 2014 and 2017, to about 5.1 million. VA patient satisfaction also rose, according to patient surveys cited in the study.

WILKIE: The VA “had suffered from bad leadership. And that’s a bipartisan comment. And the second thing I had to do was make sure that as we approach our veteran population that we make sure that they are at the center, their needs are at the center of what we do … I think we’ve had it backwards at VA for many years. … One of the things that we’re doing at VA is that we have same-day mental health service. … It is huge.” — interview with Fox News.

VA’s effort to provide same-day primary and mental-health care when medically necessary at every VA medical center was publicized in April 2016 under the Obama administration. At the time, David Shulkin was helping lead the effort as VA’s top health official. By late 2016, the department’s blog announced that the goal of same-day mental health services would be achieved by year’s end.

A Dec. 23, 2016, article in the Harvard Business Review cites new same-day services at all VA hospitals as evidence of notable progress at the department. Shulkin, who was then named by Trump to be his VA secretary, told Congress in late January 2017 the services already were fully in place.

Trump selected Wilkie to be his VA secretary after firing Shulkin in March 2018 because of ethics charges and internal rebellion at the department over the role of private care for veterans. Trump’s initial replacement choice, White House doctor Ronny Jackson, withdrew after allegations of workplace misconduct surfaced. While Wilkie has been credited by both parties in Congress for bringing stability to the department, the VA improvements he attributes to himself this past week are misplaced.

TRUMP: “You know, foolishly, some people said that the American taxpayer is paying the tariffs of China. No, no, no — it’s not that way. They’re paying a small percentage, but our country is taking in billions and billions of dollars.”

THE FACTS: That’s not true. U.S. consumers and the public are primarily if not entirely paying the costs of the tariffs, as his chief economic adviser, Larry Kudlow, has acknowledged. That’s how tariffs work: Importers pay the taxes and often pass on the cost to consumers. The U.S. is not “taking in” billions from China as a result.

A sustained trade dispute is not painless for China, either. Its goods become pricier and therefore less competitive. But China is not paying a tab to the U.S. treasury in this matter.

As Kudlow said, accurately: “Both sides will suffer on this.” But in his view, “this is a risk we should and can take.”

TRUMP: “Prime Minister Abe and I have agreed to dramatically expand our nations’ cooperation in human space exploration. Japan will join our mission to send U.S. astronauts to space. We’ll be going to the moon. We’ll be going to Mars very soon.”

THE FACTS: Not very soon. The U.S. will almost certainly not be sending humans to Mars in his presidency, even if he wins a second term.

The Trump administration has a placed a priority on the moon over Mars for human exploration (President Barack Obama favored Mars) and hopes to accelerate NASA’s plan for returning people to the lunar surface. It has asked Congress to approve enough money to make a moon mission possible by 2024, instead 2028. But even if that happens, Mars would come years after that. International space agencies have made aspirational statements about possibly landing humans on Mars during the 2030s.

TRUMP on Iran: “If you look at the deal that Biden and President Obama signed, they would have access — free access — to nuclear weapons, where they wouldn’t even be in violation, in just a very short period of time. What kind of a deal is that?”

THE FACTS: That’s a misrepresentation of what the deal required. Iran would not have access to nuclear weapons capability in a “very short period” without violating the terms of the 2015 accord. The U.S. withdrew from the multinational agreement last year.

During the 15-year life of most provisions of the deal, Iran’s capabilities were limited to a level where it could not produce a nuclear bomb. Iran was thought to be only months away from a bomb when the deal came into effect.

After 15 years, Iran could have an array of advanced centrifuges ready to work, the limits on its stockpile would be gone and, in theory, it could then throw itself into producing highly enriched uranium. But nothing in the deal prevented the West from trying to rein Iran in again with sanctions. The deal included a pledge by Iran never to seek a nuclear weapon. In return, partners in the deal eased sanctions on Iran.