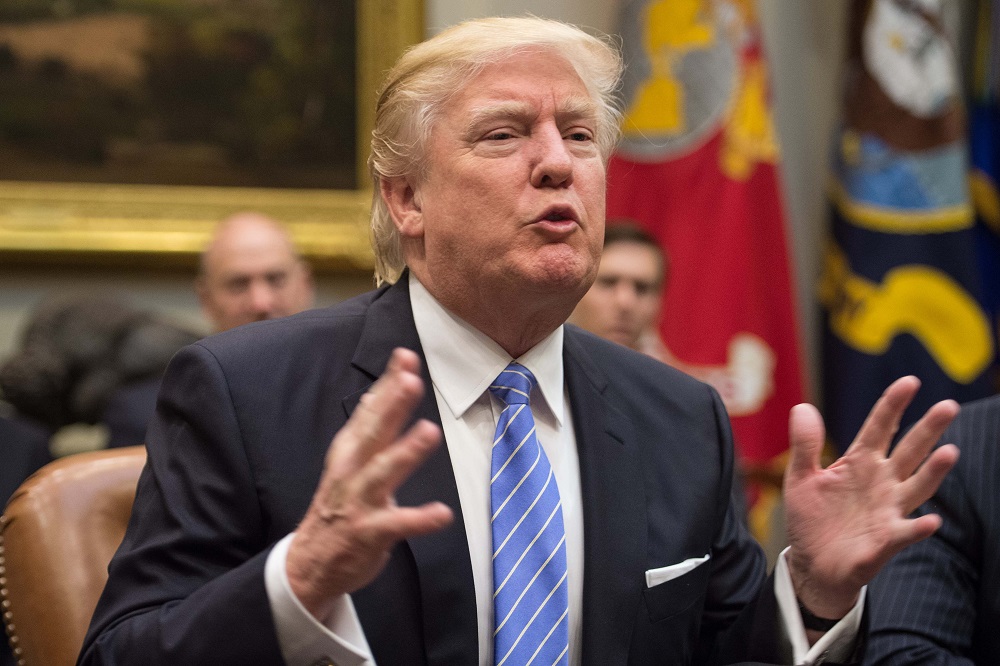 President Donald Trump appears to be playing right into doubters hands as he is now calling for “a major investigation” into voter fraud. He’s made these debunked claims since November’s election alleging that millions of illegal votes were made during the general election, but he’s yet to show any evidence.

There’s been plenty of evidence to the contrary, and both Republicans and Democrats have both stated that his claims are baseless. By now, they should have learned that the more you tell Trump that something he says isn’t so, the more he’s apt to double down. When a reporter mentioned why an investigation hadn’t been started with such high numbers being claimed it was basically throwing down the gauntlet for the president.

These are the type of actions that are only showing other countries how to manipulate Trump as he will cling to what he believes are ‘fact’ even when shown that he is wrong. Trump is never wrong, and if he doesn’t get his ego in check soon, he will continue dropping in his approval ratings. We can only hope that eventually, someone in his inner circle will be able to get him in check because right now as long as he keeps signing off on executive orders the Republicans want, they’ll let all this craziness slide.

I will be asking for a major investigation into VOTER FRAUD, including those registered to vote in two states, those who are illegal and….

even, those registered to vote who are dead (and many for a long time). Depending on results, we will strengthen up voting procedures!

The probe into voter fraud may not be limited to the 2016 presidential election and could center on large states where Trump didn’t necessarily compete, according to White House press secretary Sean Spicer, who added, without citing evidence, that problems with illegal voting occurred in bigger states.

Trump’s comments on voter fraud came Monday during a meeting with congressional leaders, where he reiterated an unsubstantiated claim that 3 to 5 million illegal votes cost him the popular vote, according to two sources familiar with the meeting.

On Tuesday, Spicer vigorously defended Trump’s statement about illegal voters, though neither Trump nor his surrogates could provide evidence that any substantial illegal voting had occurred or influence the popular vote.

“I think in terms of registration, where you have got folks on rolls that have been deceased or moved or registered in two counties — this isn’t just about the 2016 election. This is about the integrity of our voting system,” Spicer said Wednesday.

Trump faced widespread criticism for his remarks, including from some congressional leaders in his own party, and Democrats have alleged that Republican efforts in the name of fighting voter fraud has the effect of preventing or delaying legal voters who traditionally back Democratic candidates

Trump faced widespread criticism for his remarks, including from some congressional leaders in his own party, and Democrats have alleged that Republican efforts in the name of fighting voter fraud has the effect of preventing or delaying legal voters who traditionally back Democratic candidates

“I responded … for Ohioans, to let them know we already have an investigation, or review as we call it, underway,” Jon Husted, a Republican, told CNN’s Carol Costello Wednesday. “In the past … we found less than a thousand cases of voter irregularity, less than a couple hundred cases of voter fraud, and zero cases of voter suppression.”

The reviews, which take place every two years, are best conducted at the state level, Husted said.

“He seems to be questioning the legitimacy of his own election, all while, for the last couple of months, touting how legitimate and huge his election was and historic it is. It can’t be both,” she said.

“What is the most deeply disturbing about his penchant for lying is — if he is willing to lie about the trivial, like crowd size, or the significant, like voter fraud, then what happens if — God forbid — we go to war and we have our troops lives on the line and there are causalities? Is he going to send Sean Spicer out to lie about the causalities that have taken place? Are our allies going to be able to trust us?”

When pushed by the media about whether Trump will call for an investigation into the matter, Spicer said, “maybe we will,” adding later that Trump believes in voter fraud based on “studies and information he has.”

“The President does believe that, I think he’s stated that before, and stated his concern of voter fraud and people voting illegally during the campaign and continues to maintain that belief based on studies and evidence people have brought to him,” Spicer said at Wednesday’s press briefing.

Trump lost the popular vote to Hillary Clinton by nearly 3 million votes in November, but won the Electoral College and thus the presidency. Trump, however, has seemingly been fixated on the popular vote, mentioning voter fraud in regards to his popular vote loss a number of times since November.

Spicer did not say specifically Tuesday which studies the President was using to support his claim of 3 million to 5 million illegally cast votes, but a 2014 study by Jesse Richman and David Earnest found more than 14% of non-citizens in 2008 and 2010 “indicated that they were registered to vote.” Only US citizens can vote in federal elections.

However, Brian Schaffner, a political scientist at the University of Massachusetts, told CNN on Tuesday that his study that is apparently being cited by the White House was misinterpreted and did not support the administration’s claims.

A number of studies have also found no evidence of widespread voter fraud.

The Truth About Voter Fraud, a report written by experts at The Brennan Center for Justice, found voter fraud rates were between 0.00004% and 0.0009%.

Trump himself — through his lawyers — has also argued that there was no evidence of voter fraud in the 2016 election. In a court filing objecting to Green Party candidate Jill Stein’s Michigan recount petition, lawyers for the president wrote, “All available evidence suggests that the 2016 general election was not tainted by fraud or mistake.”