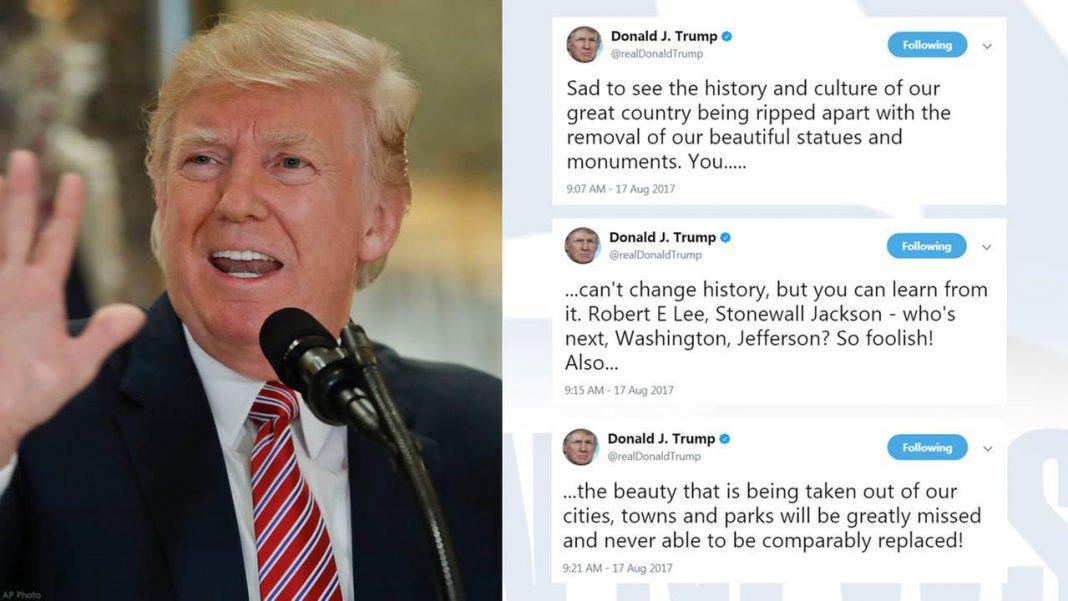 Donald Trump hates to be backed into a corner, but rather than surrender, he tends to double down. He’s doing just that now as he tried to pivot the talk of supporting white nationalists to holding on to America’s heritage after protesting the removal of Confederate statues around the country.

With prominent Republicans openly questioning his competence and moral leadership, President Donald Trump burrowed deeper into the racially charged debate over Confederate memorials and lashed out at members of his own party in the latest controversy to engulf his presidency.

Out of sight, but still online, Trump tweeted his defense of monuments to Confederate icons – bemoaning rising efforts to remove them as an attack on America’s “history and culture.”

And he berated his critics who, with increasingly sharper language, have denounced his initially slow and then ultimately combative comments on the racial violence at a white supremacist rally last weekend in Charlottesville, Virginia.

Trump was much quicker Thursday to condemn violence in Barcelona, where more than a dozen people were killed when a van veered onto a sidewalk and sped down a busy pedestrian zone in what authorities called a terror attack.

He then added to his expression of support a tweet reviving a debunked legend about a U.S. general subduing Muslim rebels a century ago in the Philippines by shooting them with bullets dipped in pig blood.

“Study what General Pershing of the United States did to terrorists when caught. There was no more Radical Islamic Terror for 35 years!” Trump wrote.

Tennessee Sen. Bob Corker, whom Trump considered for a Cabinet post, declared Thursday that “the president has not yet been able to demonstrate the stability nor some of the competence that he needs to” in dealing with crises. And Sen. Dan Sullivan of Alaska tweeted, “Anything less than complete & unambiguous condemnation of white supremacists, neo-Nazis and the KKK by the @POTUS is unacceptable. Period.”

Trump, who is known to try to change the focus of news coverage with an attention-grabbing declaration, sought to shift Thursday from the white supremacists to the future of statues.

“You can’t change history, but you can learn from it,” he tweeted. “Robert E. Lee. Stonewall Jackson – who’s next, Washington, Jefferson? So foolish. …

“Also the beauty that is being taken out of our cities, towns, and parks will be greatly missed and never able to be comparably replaced!”

“Sad to see the history and culture of our great country being ripped apart with the removal of our beautiful statues and monuments,” he tweeted.

Trump met separately Thursday at his golf club in nearby Bedminster with the administrator of the Small Business Administration and Florida Gov. Rick Scott, a longtime Trump supporter. Trump also prepared for an unusual meeting Friday at the Camp David presidential retreat in Maryland with his national security team to discuss strategy for South Asia, including India, Pakistan, and Afghanistan.

Though out of public view, Trump sought to make his voice heard on Twitter as he found himself increasingly under siege and alone while fanning the controversy over race and politics toward a full-fledged national conflagration.

He dissolved two business councils Wednesday after the CEO members began quitting, damaging his central campaign promise to be a business-savvy chief executive in the Oval Office.

And the White House said Thursday that it was abandoning plans to form an infrastructure advisory council.

Two major charities, the Cleveland Clinic and the American Cancer Society, announced they are canceling fundraisers scheduled for Trump’s resort in Palm Beach, Florida, amid the continuing backlash over Trump’s remarks.

Meanwhile, rumblings of discontent from his staff grew so loud that the White House had to release a statement saying that Trump’s chief economic adviser wasn’t quitting. And the president remained on the receiving end of bipartisan criticism for his handling of the aftermath of the Charlottesville clashes.

On Thursday, he hit back hard – against Republicans.

Graham said Wednesday that Trump “took a step backward by again suggesting there is moral equivalency” between the marching white supremacists and the people who had been demonstrating against them. Flake has been increasingly critical of Trump in recent weeks.

Pressured by advisers, the president had softened his words on the dispute Monday, two days after he had enraged many by declining to single out the white supremacists and neo-Nazis whose demonstration against the removal of a Robert E. Lee statute had led to violence and the death of a counter-protester in Charlottesville.

He returned to his combative stance Tuesday – insisting anew during an unexpected and contentious news conference at Trump Tower that “both sides” were to blame.

Aides watching from the sidelines reacted with dismay and disbelief and privately told colleagues they were upset by the president’s remarks, though not upset enough for anyone to resign.

The resignation speculation around Gary Cohn, head of the National Economic Council and a Jew, had grown so intense by Thursday that the White House released a statement saying reports that Cohn was stepping down were “100 percent false.”

But not all of Trump’s aides were unhappy with his performance.

Adviser Steve Bannon‘s job security in the White House has become tenuous – Trump offered only a “we’ll see” on Tuesday when asked if his chief strategist would remain in his post – but Bannon has been telling allies that the president’s news conference would electrify the GOP base.

And in a pair of interviews Wednesday, Bannon cheered on the president’s nationalist tendencies and suggested that a fight over Confederate monuments was a political fight he welcomes.

“The race-identity politics of the left wants to say it’s all racist,” Bannon told The New York Times. “Just give me more. Tear down more statues. Say the revolution is coming. I can’t get enough of it.”