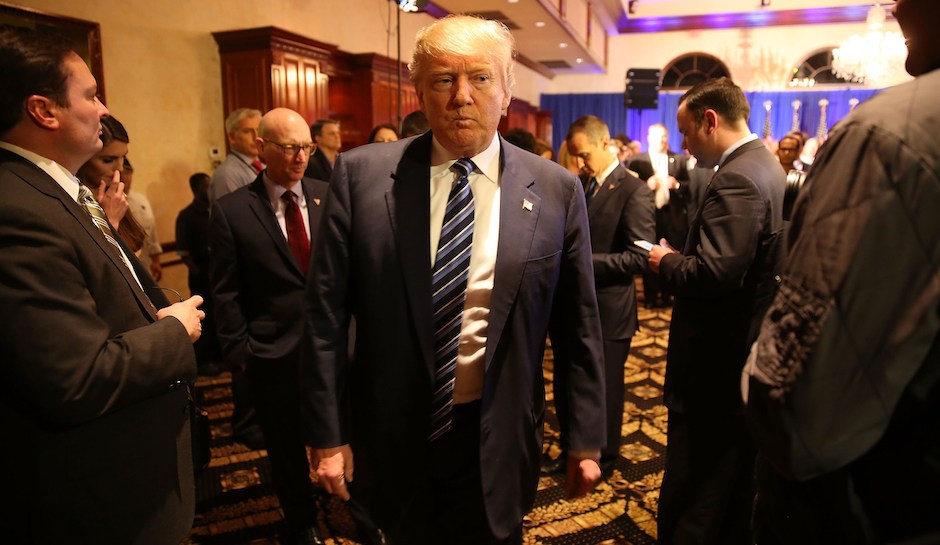 Many of President Donald Trump‘s nominations to America’s federal courts might seem strange or not vetted well, as in the case of Brett J. Talley, but one thing that stands out with his choices is the fact that they are all white men.

In fact, he’s nominating all white men at a rate not seen in nearly 30 years, threatening to reverse a slow transformation toward a judiciary that reflects the nation’s diversity.

So far, 91 percent of Trump’s nominees are white, and 81 percent are male, an analysis has found. Three of every four are white men, with few African-Americans and Hispanics in the mix. The last president to nominate a similarly homogenous group was George H.W. Bush.

The shift could prove to be one of Trump’s most enduring legacies. These are lifetime appointments, and Trump has inherited both an unusually high number of vacancies and an aging population of judges. That puts him in position to significantly reshape the courts that decide thousands of civil rights, environmental, criminal justice and other disputes across the country. The White House has been upfront about its plans to quickly fill the seats with conservatives and has made clear that judicial philosophy tops any concerns about shrinking racial or gender diversity.

Trump is anything but shy about his plans, calling his imprint on the courts an “untold story” of his presidency. “Nobody wants to talk about it,” he says. “But when you think of it … that has consequences 40 years out.” He predicted at a recent Cabinet meeting, “A big percentage of the court will be changed by this administration over a very short period of time.”

Advocates for putting more women and racial minorities on the bench argue that courts that more closely reflect the demographics of the population ensure a broader range of viewpoints and inspire greater confidence in judicial rulings.

One court that has become a focus of the debate is the Eastern District of North Carolina, a region that, despite its sizeable black population, has never had a black judge. A seat on that court has been open for more than a decade. George W. Bush named a white man, and Barack Obama at different points nominated two black women, but none of those nominees ever came to a vote in the Senate.

Kyle Barry, senior policy counsel for the NAACP Legal Defense and Educational Fund, said that when diversity is lacking, “there’s a clear perception where the courts are not a place people can go and vindicate their civil rights.”

In recent decades, Democrats have consistently named more racial minorities and women on the courts. But even compared to his Republican predecessors, Trump’s nominees stand out. So far, he has nominated the highest percentage of white judges in his first year since Ronald Reagan. If he continues on his trend through his first term, he will be the first Republican since Herbert Hoover to name fewer women and minorities to the court than his GOP predecessor.

The analysis reviewed 58 nominees to lifetime positions on appellate and district courts, as well as the Supreme Court, by the end of October. Fifty-three are white, three are Asian-American, one is Hispanic, and one is African-American. There are 47 men and 11 women. Thirteen have won Senate approval.

The numbers stand in marked contrast to those of Obama, who made diversifying the federal bench a priority. White men represented just 37 percent of judges confirmed during Obama’s two terms; nearly 42 percent of his judges were women.

Some of Obama’s efforts were thwarted by a Republican-led Senate that blocked all of his nominations he made in the final year of his presidency, handing Trump a backlog of more than 100 open seats and significant sway over the future of the court.

Trump has moved aggressively to name new judges, getting off to a much quicker start than his predecessors. He has nominated more than twice as many as Obama had at this point in his presidency. While there have been clashes in the Senate over the nomination process, Republican Majority Leader Mitch McConnell has signaled that he is committed to moving judicial nominees through.

Many of Trump’s white, male nominees would replace white, male judges. But of the Trump nominees currently pending, more than a quarter are white males slated for seats have been held by women or minorities.

Of the eight seats currently vacant that had non-white judges, only one has a non-white nominee.

White House spokesman Hogan Gidley says Trump is focused on qualifications and suggests that prioritizing diversity would bring politics to the bench.

“The president has delivered on his promise to nominate the best, most-qualified judges,” Gidley said. “While past presidents may have chosen to nominate activist judges with a political agenda and a history of legislating from the bench, President Trump has nominated outstanding originalist judges who respect the U.S. Constitution.”

Trump, who has cited the confirmation of Supreme Court Justice Neil Gorsuch as a key achievement, has focused on judges with conservative resumes. His picks have been welcomed by conservative legal groups.

Leonard Leo, the executive vice president of the Federalist Society who has advised Trump on judges, said the president’s judicial picks should be evaluated based on his nominations to the Supreme Court and appellate courts, given that home-state senators traditionally offer recommendations for district courts that carry significant weight when the lawmaker and the president are of the same party.

There have been 19 nominees to those higher courts; more than two-thirds are white men.

And past presidents also have pushed for diversity in the district courts. The Obama White House would make clear diversity was a priority and “if we found good candidates, we would encourage senators to take a look at them,” said Christopher Kang, who worked on judicial nominations in the Obama administration.

Alberto Gonzales, who served as attorney general for George W. Bush, says that when considering nominees “sometimes President Bush would look at the list we gave him, and he would say, ‘I want more diversity, I want more women, I want more minorities.’”

For its analysis, media outlets looked at all lifetime appointments to federal judgeships — including all seats on the Supreme Court, Courts of Appeals, U.S. District Courts and International Courts of Trade— counting nominations to higher courts as new appointments. For the biographical information of each judge, the AP used data from the Federal Judicial Center.

In the case of pending Trump nominees, reporters called each nominee or their representative to collect information on race, gender, and birthdate. In eight cases where nominees declined to give their race, officials familiar with the information confirmed that all identified themselves as white males.