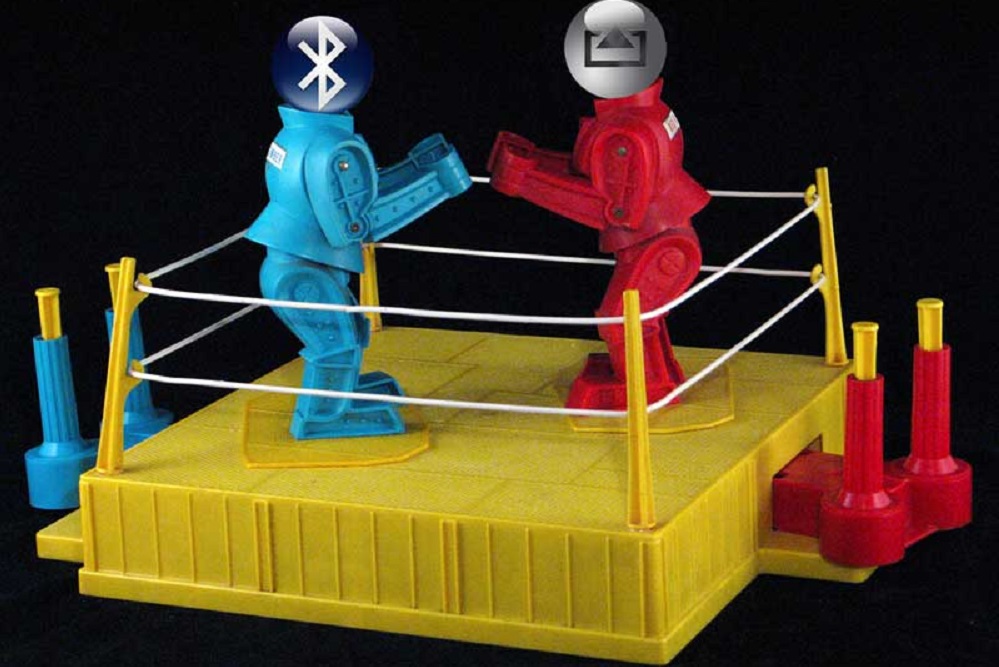 Wireless speakers are now all over the place. Not that we’re complaining, it’s a divine innovation of being able to enjoy sounds and music without the encumbrance and entanglements of cabling and to be able to control your sounds or music from anywhere in your home. But with every new thing, there’s an issue. Allow us to add to your first world problems by giving you something to consider when choosing which wireless speakers you need to buy and what to look for in wireless speaker reviews. It’s the battle of Airplay vs. Bluetooth AptX for the right format in choosing the best wireless speakers.

Did you think that choosing the best wireless speakers based on just how they look, sound and being able to connect to standard Bluetooth was that easy? We apologize for complicating the issue, but we feel that you’re entitled to the best product for your hard-earned cash. Choosing a wireless speaker depends upon several things such as its support for various wireless technologies. Are you a casual listener who is content to just hearing your audio, an audiophile who spends a lot of cash on audio equipment and the best quality sounds, or just the guy in between with sensitive enough ears to be irritated at minute scratches and ‘graininess’ of your music? There’s also your technological inclination not often mentioned in wireless speaker reviews whether you’re a pure Apple or Android fan.

What is Airplay and Bluetooth AptX and why does your preference to a mobile operating system matter in choosing wireless speakers? Because the quality of sound your speaker produces depends on how it supports these wireless technologies, Bluetooth, Bluetooth AptX and Airplay. The ability to support them determines how your new wireless speaker performs when using your iPhone, your Android or other audio equipment.

Thanks to Bluetooth, half the world now communicates with less wiring between their speakers, headsets, microphones and their respective dependent electronic devices. However, Bluetooth was designed in such a way that limits streaming audio to allow for any other audio sources such as calls to come in. This means lesser data can pass between devices. This, in turn, limits the amount of audio data and affects audio quality. There are tons of budget wireless speakers out there that support only Bluetooth and these devices should be okay for casual listeners or people on the budget. There’s always time to level up.

Speaking of leveling up, there’s Bluetooth AptX. This time, this standard is designed more for streaming data instead of audio. To be clear, audio can still be passed as streaming data so there’s more room to stream better quality music. The best quality speakers support this standard as well as many Android devices which is why your choice of operating system comes into play. Let’s just say that there are some people who have no love for Apple so the best wireless speakers for them are those that support Bluetooth AptX, not just plain Bluetooth and Airplay. AptX has the capacity to be even better than CD-quality music. If you have high-resolution music files, they won’t be wasted. AptX streaming, however, can’t yet compare to a direct wired connection but we’re compromising wireless convenience.

In case you don’t know, whenever the prefixes ‘I’ and ‘Air’ come up, it’s an Apple product and Apple fans are often passionate about Apple products. Apple is passionate about their Apple products and about how different they have to be from everyone else. Airplay is a transmission method that’s exclusive to Apple products or to licensed third parties (though there might be some products out there that Apple doesn’t know about). Unlike Bluetooth which directly connects two devices, Airplay transmits and receives data through the user’s Wi-Fi connection. If you’re an Apple fan and your home and office network uses a good Wi-Fi router, you’re all set. It’s good for the home and all but the problem is when you venture outside. Well, Apple does support Bluetooth unfortunately, they don’t support Bluetooth Aptx. If you’re outside without Wi-Fi and you like quality sounds and own an iPhone 7 onwards, you’re in trouble. But if you’re at home and you have the best wireless speakers with Airplay, it’s like having a good Hi-Fi audio system at home.

So Airplay vs. Bluetooth AptX? How about both? So far we haven’t found any that supports both Airplay and AptX or describes themselves as having both, but it would be cool if there were freeing, us from having to choose and get great sound just the same.

Well, for now, the lines are drawn. If you’re with Apple and like your crisp music streamed wirelessly, get wireless speakers with Airplay. Otherwise, Choose one with AptX.