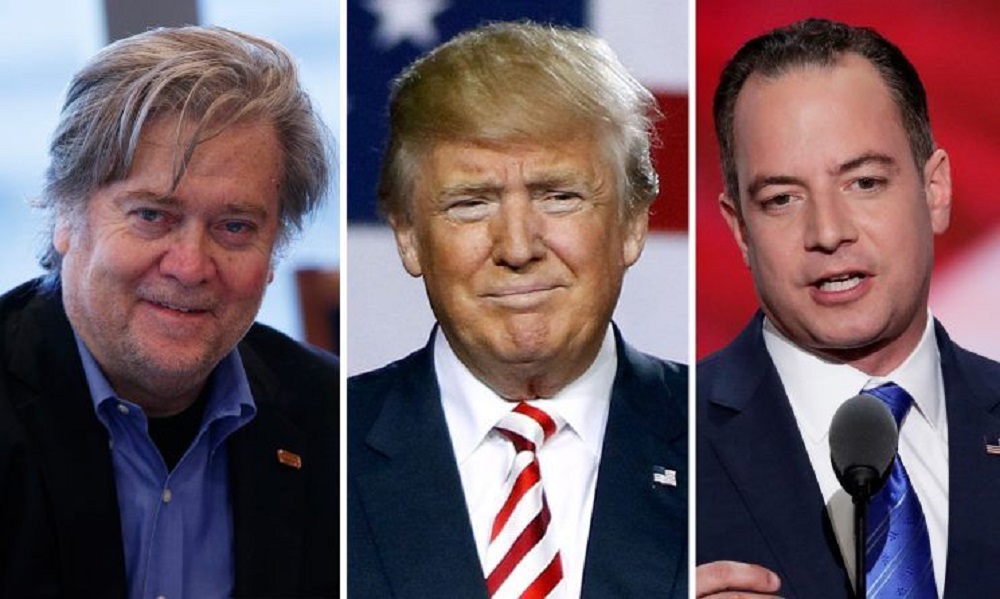 Donald Trump had a busy weekend at Trump Tower making his top selections for White House chief of staff along with his top presidential strategist with some interesting choices. Pundits are already deciphering what this means for the next president.

Paul Ryan and the Republican party are putting on a united front, but it will be telling if newly selected Stephen Bannon will be around in six months or suddenly leaving his position.

CBS 60 Minutes scored the first sit-down interview with Trump on Sunday and here’s some of the major points he made. 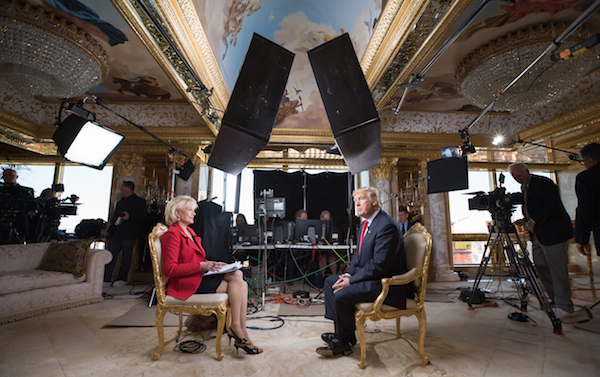 The wall: Trump still plans on building a wall across the Mexican border, though he said he was perhaps open to part of it being a fence, rather than a wall. “I’m very good at this. It’s called construction,” Trump said.

Deporting undocumented immigrants: “What we are going to do is get the people that are criminal and have criminal records, gang members, drug dealers, where a lot of these people, probably 2 million, it could be even 3 million, we are getting them out of our country or we are going to incarcerate,” Trump said. Once he considers the country’s borders secure, he said there will be a vetting process to allow re-entry.

Hillary Clinton: Though he called his competitor a “nasty woman” and a “puppet” during the final presidential debate, Trump characterized Clinton’s concession phone call as “lovely.” “She is very strong and very smart,” he said.

But Trump wouldn’t rule out appointing a special prosecutor to investigate Clinton over the use of a private email server during her tenure as secretary of state. “They’re good people. I don’t want to hurt them. And I will give you a very, very good and definitive answer the next time we do ’60 Minutes’ together,” he said.

“It’s a tough situation. I wanted to get his full view and I got his, you know I got a good part of his view,” Trump said of his discussion with the man he once claimed was “the founder of ISIS” in a campaign speech.

His strategy for dealing with ISIS: Trump declined to tell Stahl how he planned to defeat ISIS, saying he wanted to preserve the element of surprise, and that “we have some great generals.” Stahl noted that he had previously said he knows more than those very generals. “I’ll be honest with you, I probably do because look at the job they’ve done.”

Obamacare: According to Trump, the President did not ask Trump not to repeal Obamacare, but instead explained the up- and downsides to the Affordable Care Act. Trump said his replacement for the Act will also include a provision mandating that insurers cover people with pre-existing conditions, and that parents will still be able to keep children “still living with them” on their insurance.

Draining the swamp: Stahl called Trump out on the presence of lobbyists on his transition team; Trump responded that the only people in D.C. available are lobbyists. “I’m saying that they know the system right now, but we’re going to phase that out,” he said.

Abortion rights: Trump told Stahl he plans to appoint a Supreme Court Justice who leans pro-life as he does, and that “if” Roe v. Wade were to be overturned, that would mean the states would decide abortion rights issues. When Stahl pointed out that meant some states could ban abortions entirely, leaving women with no choice but to go to another state, he responded, “Yeah, well, they’ll perhaps have to go, they’ll have to go to another state.”

The Electoral College: While he spent much of his campaign — and even years before — talking about how America’s electoral system was rigged, Trump was unfazed by the fact that he won the presidency with the Electoral College but did not win the majority of the public’s votes. “I’m not going to change my mind just because I won,” he told Stahl. “But I would rather see it where you went with simple votes. You know, you get 100 million votes, and somebody else gets 90 million votes, and you win.”

His tweeting: “If I use it at all, I’m going to do very restrained,” he told Stahl on Friday. On Sunday morning, his account posted two tweets casting (inaccurate) aspersions at the New York Times.

Wow, the @nytimes is losing thousands of subscribers because of their very poor and highly inaccurate coverage of the "Trump phenomena"

Protests and hate crimes: In part, because Trump won the Electoral College but not the popular vote, his election has inspired large protests across the country. But perhaps of more concern are reports of increasing numbers of alleged hate crimes: violent rhetoric directed at ethnic minorities, swastikas spray-painted on cars, hijabs grabbed from Muslim women’s heads, and worse.

“I am very surprised to hear that,” Trump said when the reports were brought up. “I think it’s a very small amount.” When pressed by Stahl over whether he had anything to say to the perpetrators of these alleged acts, Trump finally responded with: “Stop it.” 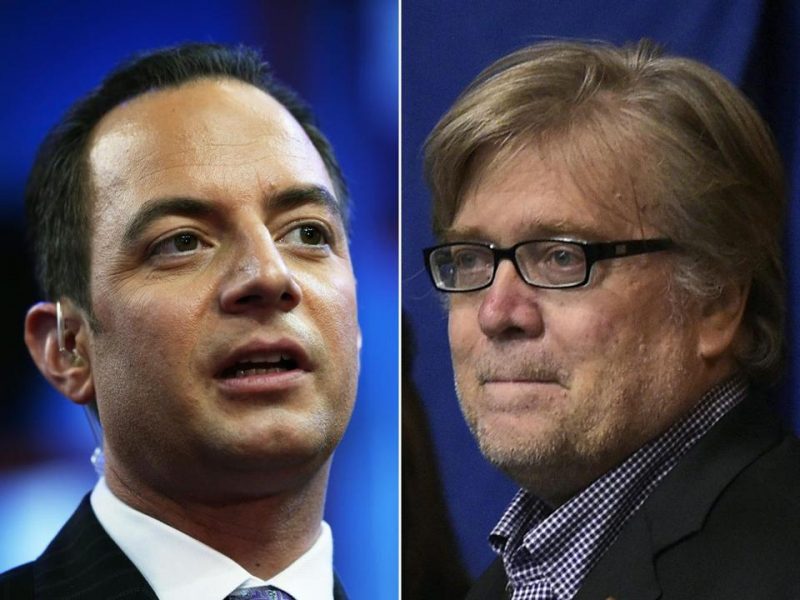 In bringing Priebus and Bannon into the White House, Trump is making overtures to both traditional Republican circles and the party’s anti-establishment wing, which helped fuel the businessman’s political rise.

Bannon was notably given top billing in the press release announcing the appointments, a curious arrangement giving that White House chief of staff is typically considered the most powerful West Wing job.

Under Bannon’s tenure, the Breitbart site pushed a nationalist, anti-establishment agenda and became one of the leading outlets of the so-called alt-right – a movement often associated with white supremacy and a defense of “Western values.”

Neither Priebus nor Bannon bring significant policy experience to their new White House roles. Chiefs of staff, in particular, play a significant role in policy making, serving as a liaison to Cabinet agencies and deciding what information makes it to the president’s desk. They’re often one of the last people in the room with the president as major decisions are made.

Together with Vice President-elect Mike Pence, the triumvirate will lead Trump’s transition to the White House and help guide his presidency, Trump said in a statement.

“I am thrilled to have my very successful team continue with me in leading our country,” Trump said. He called Priebus and Bannon “highly qualified leaders who worked well together on our campaign and led us to a historic victory.

Priebus called the appointment “an honor” and predicted the billionaire “will be a great president for all Americans.”

The appointments came after a day in which Trump’s tough-talking plan to rein in illegal immigration showed signs Sunday of cracking, with the president-elect backing off his vow to build a solid wall along the southern U.S. border and Ryan rejecting any “deportation force” targeting people living in the country illegally.

After Trump told CBS’ “60 Minutes” that his border wall might look more like a fence in spots, the combative billionaire took to Twitter to settle some scores.

During a four-hour spree, Trump savaged the New York Times and gloated about the GOP stalwarts lining up to congratulate him, bragging that staunch critics and GOP rivals John Kasich, Mitt Romney and Jeb Bush had sent attaboys. Former presidents George W. and George H.W. Bush also had sent their “best wishes on the win. Very nice!” The New York Times, Trump wrote to his 14 million followers, is “dishonest” and “highly inaccurate.”

As Trump revenge-tweeted, threats flew between power brokers, and protests across the country continued.

The president-elect retreated from the campaign promise that had inspired his supporters to chant “Build the wall!” at Trump’s massive campaign rallies.

Would he accept a fence in some spots on the border? In an interview to be aired Sunday, Trump told “60 Minutes”: “For certain areas, I would, but certain areas, a wall is more appropriate. There could be some fencing.”

Excerpts of the interview were released in advance.

Trump also had vowed to immediately deport all 11 million people living in the country illegally. But in the interview, he said he’s focusing first on ousting or incarcerating 2 million to 3 million “that are criminals and have criminal records, gang members, drug dealers.” Trump emphasized that securing the border is his very first immigration priority.

On that, Ryan agreed. But on CNN’s “State of the Union,” Ryan rejected the kind of “mass deportations” Trump had championed during the campaign.

“We are not planning on erecting a deportation force,” Ryan said.

More tension emerged Sunday when Trump’s campaign manager, Kellyanne Conway, said Senate Democratic Leader Harry Reid should be careful in a “legal sense” about characterizing Trump as a sexual predator. When asked whether Trump was threatening to sue Reid, Conway said no.

But Adam Jentleson, Reid’s deputy chief of staff, said Trump is “hiding behind his Twitter account and sending his staff on TV to threaten his critics.”