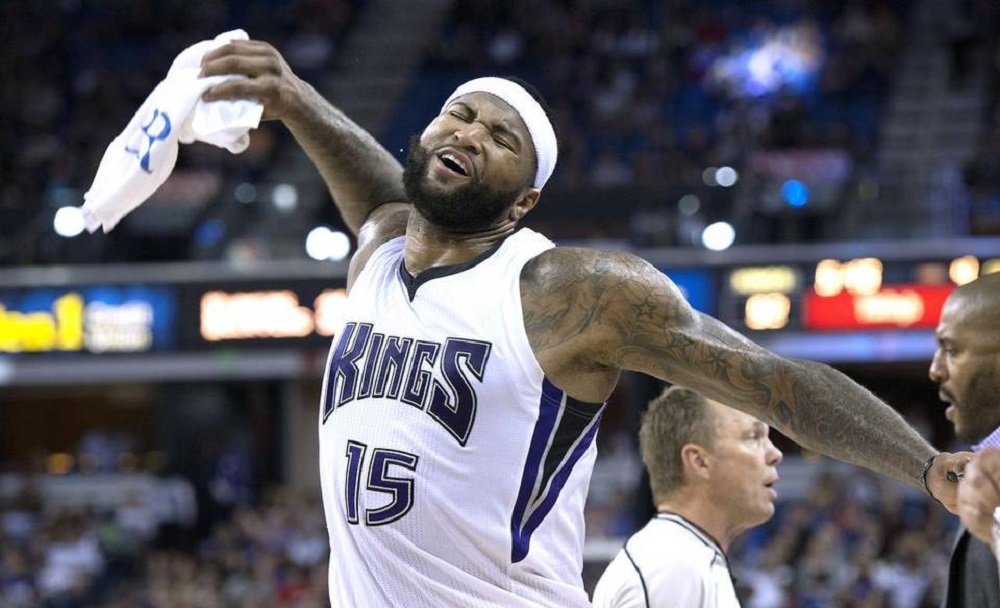 DeMarcus Cousins Picks Up 18th Technical Foul with Referees, NBA Out to Get Him

DeMarcus Cousins will not be suiting up for the New Orleans Pelicans Wednesday night game against the Detroit Pistons after picking up his 18th technical foul of the season, trigging the NBA’s automatic one-game suspension.

The tech came about 30 seconds into the team’s Sunday loss to the Oklahoma City Thunder as Boogie got into it with Steven Adams. The early personal and technical fouls cost Cousins most of the first quarter.

There are two things to note here. First, Cousins has already proven his ability to be an offensive leader for the Pels, but only when he can stay on the court. Cousins is good for nearly 28 points and 11 rebounds per game, numbers matched by only teammate Anthony Davis and Hall of Famers such as Shaquille O’Neal and Kareem Abdul-Jabbar.

Second, and most importantly, the league and referees are out to get Boogie—and he needs to understand and deal with that.

“Boogie has to realize you’re not going to be judged like other players,” said Fox Sports 1 analyst Chris Broussard during “Undisputed” with Shannon Sharpe and Skip Bayless. “You have a track record, and that has to come into play. There’s not a segment of our society where track record doesn’t come into play. If you’re a convicted felon, you’re going to be held to a different standard; you’re going to be judged differently than somebody with a clean record. The NFL’s going to judge Greg Hardy or Ray Rice differently than Russell Wilson or Cam Newton because of your track record in that area, domestic violence.”

Much like the great Rasheed Wallace, Boogie has a target on his back when he’s out there on the court. He needs to know that the opposing players are going to be looking to piss him off, and the refs are looking for him to screw up and retaliate.

That’s easier said than done, of course, especially for Boogie. It’s important to remember that there is a reason the Sacramento Kings were willing to part with the center for a half-eaten plate of spaghetti with a balled-up napkin in it, he’s an attitude issue. Cousins is playing his seventh season in the NBA, and he has amassed 106 technical fouls. 106. In seven years.

But while DeMarcus may be a pain and provide the Pelicans with plenty of headaches should he sign long term, he and AD have amazing potential together. Hopefully, Davis can keep him under control.