Melania Trump is more like a ghost with the Donald Trump administration as she’s wisely stayed in New York avoiding the Russia probe issue hounding her husband.

Every so often, a bit of news pops up or worries about her, and with the recent visit out of the country, one huge question has popped up for several people.

No, it’s not about why she has continually jerked her hand away from Donald Trump when he reaches for it. I think most people who’ve been in a relationship understands that very easily.

So this leads us to the latest bit of mystery bandied about on the internet about the first lady. To cover up or not to cover up?

Melania Trump wore a veil to the Vatican on Wednesday to meet the pope, but no head covering a few days earlier to meet the king of Saudi Arabia, a religiously conservative country where most women cover themselves up from head to toe.

Why the difference? The answer is a complicated mix of personal preference, diplomatic protocol and religious dictates. 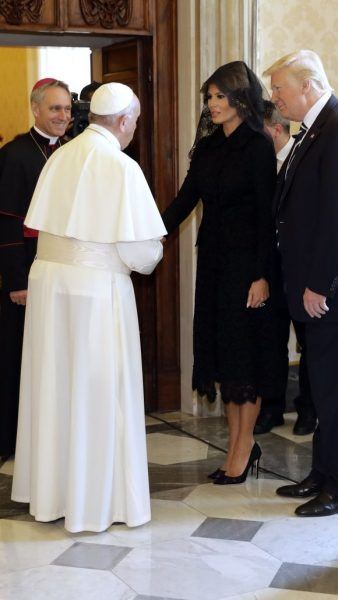 Stephanie Grisham, a spokeswoman for the first lady, said Mrs. Trump’s decision to wear a black lace veil known as a mantilla followed Vatican protocol that women who have an audience with the pope must wear long sleeves, formal black clothing, and a veil to cover their head. In Saudi Arabia, however, the government did not request that Mrs. Trump wear a head covering known as a hijab, or a headscarf, Grisham said.

The Vatican’s rules of attire are not strictly enforced. Many women, including high-ranking dignitaries, have visited the pontiff with their heads uncovered, including German Chancellor Angela Merkel in 2015 and Aung San Suu Kyi, Myanmar’s top civilian leader, this month.

Many women wear veils out of respect. Mrs. Trump is Catholic, which likely made accompanying President Donald Trump for a meeting with the leader of the world’s more than 1 billion Roman Catholics all the more meaningful to her.

When a Vatican official handed her a rosary, the first lady immediately gave it to the pope to bless. She spent time in front of a statue of the Madonna at the Vatican’s children’s hospital and laid flowers at its feet. She also prayed in the hospital chapel.

Every woman in the U.S. delegation wore a veil, including Ivanka Trump, the president’s daughter who converted to Judaism before marriage.

In Saudi Arabia, the first lady dressed conservatively for her arrival Saturday in the capital of Riyadh. She wore a long-sleeved, high-necked, black pantsuit that mimicked the loose, black robes, or abayas, that Saudi women and female residents wear. Her attire during the two-day visit hewed to the protocol for high-level female visitors: modest dress, longer sleeves, higher necklines, pants and long dresses. 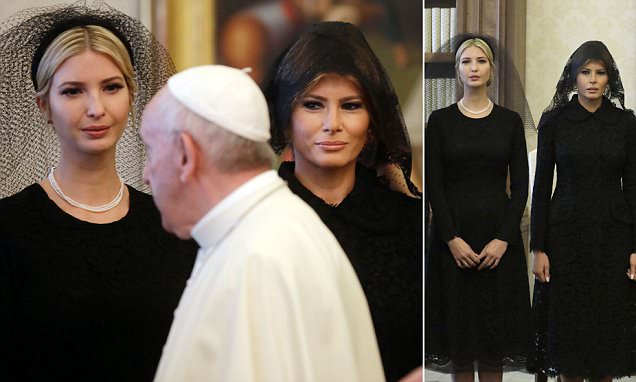 Most Western VIP women who visit Saudi Arabia don’t cover their heads, including British Prime Minister Theresa May and Merkel. Laura Bush and Michelle Obama also left their heads bare when they visited as first ladies. Then-citizen Donald Trump criticized Mrs. Obama for doing so in 2015.

In Riyadh, Mrs. Trump didn’t visit any Muslim holy sites or mosques where head coverings and other steps such as removing one’s shoes would have been required.

In Israel, the Trumps visited the Western Wall, the holiest site where Jews can pray. Donald Trump, who became the first U.S. president to visit the wall while in office, donned a yarmulke – a skullcap – which is customary; the site keeps stacks of them for visitors to wear.

The president also wore a yarmulke at Yad Vashem, Israel’s Holocaust memorial, where it is not required. Trump likely wore one out of respect.

At the Vatican, while Mrs. Trump strictly followed tradition and protocol by wearing black and a mantilla, other high-profile visitors have taken liberties with their attire.

In 2006, Cherie Blair, a practicing Catholic and wife of then-British Prime Minister Tony Blair, violated protocol outright when she wore white for a meeting with Pope Benedict XVI. Only royals are allowed the “privilege du blanc” – the so-called white privilege that dictates white outfits and white head coverings for queens and other royals when meeting the pontiff.

In 1989, during the landmark audience between Mikhail Gorbachev and Pope John Paul II following the fall of the Berlin Wall, it was the Soviet leader’s wife, Raisa Gorbachev, who stole headlines: She wore a bright red dress.