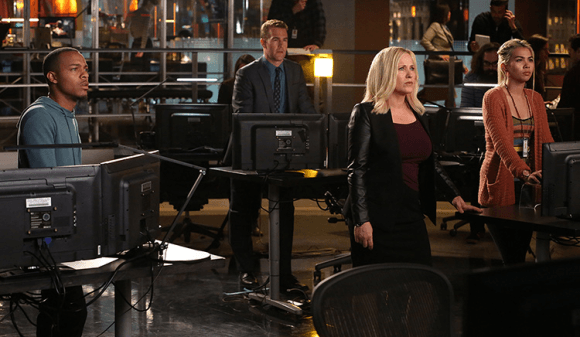 On this week’s episode of “CSI: Cyber,” a young woman, Quinn Elliot, was murdered and set on fire. Then Agent Ryan got a text about the murder. The young woman’s phone was recovered so they could search it for clues. However, the phone had been burned when she was set on fire. They determined Quinn had been a Black Hat hacker, and Agent Ryan said they needed to question Quinn’s father about her murder.

Nelson determined the calculator function on Quinn’s cell phone contained spyware that would help them with the case. They had to figure out the passcode for the phone. In doing so, they found the name of Quinn’s ex-husband. Agent Mundo said Quinn tried to email a picture on her phone right before she was killed. Raven found out the photo contained a confession that had been posted on a website. The message in the photo mentioned rape and not giving up, leading Agent Ryan to believe Quinn had been raped and wanted to confront her rapist.

Agents Mundo and Ryan met with Quinn’s ex-husband, Mr. James. Agent Ryan told him Quinn had been living a double life because he knew her as a software engineer named Lexi. Agent Mundo said they had to confiscate devices from the home the couple had shared. He said Lexi/Quinn wasn’t who they thought she was. Mr. James said he wouldn’t be able to help them and then left.

A brute-force bot was used to crack into a hidden partition on Quinn’s phone. When they got into it they found out she logged into coffee shop WiFi every day. Raven found out Quinn had a half a million dollars in the bank. Agent Ryan speculated the confession they found didn’t come from Quinn, but from someone else who was trying to get Quinn’s confession deleted from the web. She said Quinn had been hired to shut down a rape victim.

Agent Ryan said they had to find out who posted the secret about the rape. Whoever hacked into Quinn’s phone had covered it up. Nelson said at a restaurant in New York he hacked into the restaurant’s books and when he accessed their private network he got caught and ran out of the restaurant.

Paxton University, Quinn’s college, was questioned by Agent Mundo, but he was told they had no record of any student being raped. Agent Ryan identified SOT 515 as the rapist in the case and said they had to figure out his identity. They speculated Quinn wanted to turn SOT 5 15in for hacking, and he killed her to keep her from doing it. Shelby Lockhart was determined to be the name of the rape victim in this case. SOT 5 was determined to be an annual race Paxton University students had participated in that year.

Agents Ryan and Mundo met with the school’s athletic director to search the devices of his students. He insisted none of his students were guilty of rape or murder. Agent Ryan said that he couldn’t protect the students forever. Shelby Lockhart had to file a complaint before they could gain access to the students’ devices.

Nelson said Quinn was paid to locate Shelby, so there had to be a paper trail of her whereabouts. Quinn tried to help Shelby by hacking into her phone and replacing her apps with apps for rape support groups. Quinn was supposed to keep Shelby’s rapist from finding her. Nelson found Shelby’s address and cell phone number in West Virginia. Agent Ryan went there to tell Shelby that Quinn’s murderer was looking for her. Shelby said three different men had raped her at a party the weekend the college team won the race. She said she reported her sexual assaults to the university and they told her she didn’t have a good case because she was drunk and didn’t remember the names or faces of her attackers. She said she was told she could lose her scholarship if she went to the police about the rapes.

A friend of Agent Ryan’s that was attending Paxton University gave her the name of a male student at the party and Agents Ryan and Mundo talked to him. He gave them his cell phone to recover video of the party where Shelby was raped. He said he caught the rape on camera by mistake and then deleted it because three guys at the party told him to do so and to keep his mouth shut. Agents Ryan andMundo, as well as Daniel, went there so Agent Mundo could arrest the three guys for rape. Daniel checked their phones and said there was no evidence of them committing the rapes. This led them back to the school’s athletic director.

Agent Ryan figured out that the athletic director had murdered Quinn because she knew about the rapes and he didn’t want her to make that knowledge public. She told Shelby she wasn’t alone in having been assaulted on campus, and she needed to testify about the assaults in court to help wrap up the case. Mr. James came back to FBI headquarters so Nelson could tell him why Quinn was murdered and that she had been trying to protect Shelby. Nelson and Raven showed him Quinn’s confession admitting she was living as Lexi James because she wanted to put Quinn’s identity behind her.