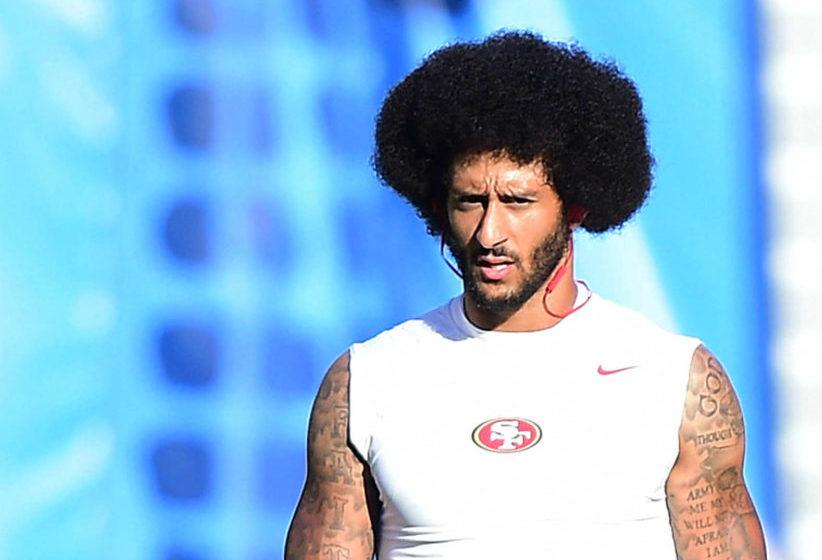 Colin Kaepernick has been taking all the heat for his national anthem protest pretty much alone, but on Thursday night, safety Eric Reed joined him on a knee during the San Francisco 49ers opening.

While a naval officer sang the first notes of “The Star-Spangled Banner” and dozens of military members unfurled an oversized flag on the football field, Colin Kaepernick and Eric Reid dropped to one knee on the San Francisco 49ers’ sideline.

With his silent gestures of protest, Kaepernick intends to keep drawing attention to a litany of American problems – and he’s no longer alone.

Kaepernick and Reid kneeled during the national anthem Thursday before the 49ers’ 31-21 preseason victory over San Diego, ignoring scattered boos and angry shouts in Qualcomm Stadium at the Chargers’ Salute to the Military preseason game.

Up north in Oakland, Seattle Seahawks cornerback Jeremy Lane showed his support for Kaepernick by sitting on the bench during the anthem. 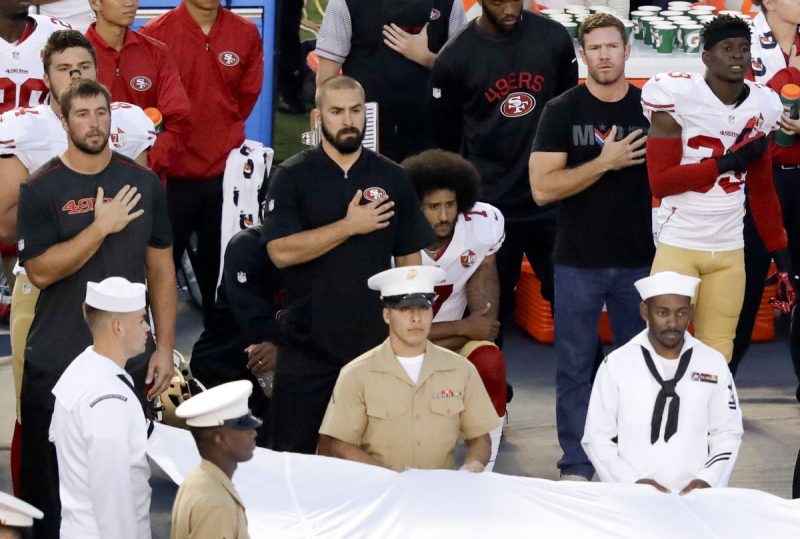 “I’m not anti-American. I love America,” said Kaepernick, who stayed on the field long after the game to sign autographs for enthusiastic fans. “I love people. That’s why I’m doing this. I want to help make America better, and I think having these conversations helps everybody have a better understanding of where everybody is coming from.”

Kaepernick’s protest has dominated the public discussion of the nation’s most popular sport this week, and his stance has been met with passionate condemnation and support. His refusal to stand for the anthem first came to public notice last week when he remained seated on the 49ers’ bench before a preseason game against Green Bay.

Poll: Race Relations in the US | Graphiq

The quarterback cited numerous reasons for his actions, ranging from racial injustice and minority oppression to police brutality and the treatment of military veterans.

Kaepernick said he plans to continue his protests during the regular season. He also intends to donate $1 million “to different organizations to help these communities and help these people,” declining to provide specifics.

Kaepernick wasn’t earnestly booed in San Diego until he took the field to start the game for the 49ers, immediately leading them on a 16-play, 85-yard touchdown drive against the hometown team. Amid his burgeoning social activism, he is also fighting for a roster spot and attempting to regain the starting job that he lost last season.

When Kaepernick left the field following pregame warmups, he was greeted with profanity and obscene gestures from Leo Uzcategui, a 20-year Navy veteran in a military-green Chargers jersey with quarterback Philip Rivers’ No. 17 in camouflage numbering.

But Domenique Banks, a 23-year-old fan from nearby Oceanside, California, got the quarterback to sign his Kaepernick jersey before the game.

Kaepernick was thrilled to be joined by Reid, the 49ers’ starting safety and a fourth-year veteran from Baton Rouge, Louisiana. Reid and Kaepernick decided together on kneeling rather than sitting during the anthem.

“I just wanted to show my support for him,” Reid said. “He wanted to make it clear that he wasn’t trying to be disrespectful to the military or the national anthem, so he decided to change his position to be more respectful, but still bring awareness to the issues that he believes are going on in this country, and that I wholeheartedly believe exist in this country.”

In Oakland, Lane sat on the bench behind his standing teammates before Seattle’s game against the Raiders. Lane said he doesn’t know Kaepernick, but was “standing behind him.”

“It’s something I plan to keep on doing until I feel like justice has been served,” Lane said. “No, I didn’t tell anyone I was going to do it. I just did it. … I don’t mean no disrespect toward anybody, but I’m just standing behind what I believe.”

Kaepernick kneeled next to Nate Boyer, a former Green Beret who went to training camp with the Seahawks last year as a long snapper. Boyer, who wrote a conciliatory open letter to Kaepernick earlier this week, spoke with the quarterback about his stance this week. He posted a photo of the two on Twitter with a caption reading, “Let’s just keep moving forward. This is what America should be all about.”

When the same naval officer performed “God Bless America” before the fourth quarter, Kaepernick remained standing and then applauded along with his teammates.

Kaepernick doesn’t intend his stance to be a criticism of the military. When the Chargers’ public-address announcer asked fans to recognize active military personnel during a timeout, the quarterback stood and enthusiastically applauded along with his teammates and the entire stadium.

“I realize that men and women of the military go out and sacrifice their lives and put themselves in harm’s way for my freedom of speech, and my freedoms in this country, and my freedom to take a seat or take a knee,” Kaepernick said. “So I have the utmost respect for them, and I think what I did was taken out of context and spun a different way.”

While negative reaction to the quarterback has been strong, Kaepernick also has been widely praised for his commitment to his stance. Veterans and military members tweeted their support for Kaepernick in recent days under the hashtag “VeteransForKaepernick.”

“It was something I was thinking about to make sure that I’m not just talking about something, but I’m actively being involved and actively trying to make a change in these communities,” Kaepernick said. “I’ve been very blessed to be in this position and be able to make the kind of money I do, and I have to help these people.”