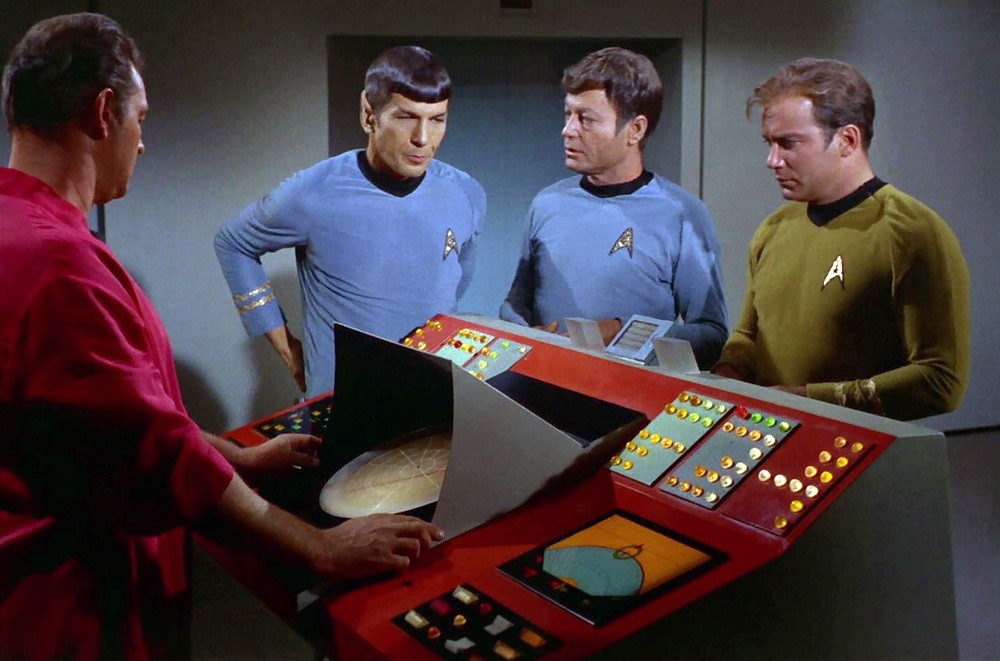 Every time I go through our annual physical exams which include some rather invasive procedures, I’m reminded of Star Trek. Every time blood is extracted through conventional means (cutting the tip of the index finger, extracting blood from the arm); or every time I have to pull my pants down in front of the doctor wanting to check for a hernia; every time I have to collect and submit a stool or urine sample, I long for the invention of the Star Trek Medical Tricorder which medical officers use to scan their patients for health problems. The doctors would just perform a sweep over the body much like a mall guard does with their metal detectors. I’m still keeping my hopes up that for the next ten years, I wouldn’t have to go through the hells described above.

Speaking of Star Trek Technology, the franchise’s 50th anniversary is almost upon us. The original TV series was a show very much ahead of its time introducing sensitive concepts we take for granted today like racial diversity with Asians, African-Americans, Russians, Klingons as crew members; and gender equality with women serving as communications officers (Uhura), first officers (Number One) and even captains (Janeway) and admirals (Nechayev). The Star Trek TV franchise has inspired many people to become scientists, doctors, astronauts and even military officers. It also inspired many of the technologies we use today. In celebration of Star Trek’s 50th, let’s revisit the technologies inspired by this revolutionary TV series.

Space Travel – NASA’s prototype space shuttle was named Enterprise after the show’s Starship Enterprise. The starship itself was named after a series of naval ships called Enterprise, the latest being an aircraft carrier and soon, a concept interstellar ship much like what’s shown in films like The Martian. The cast of the series was invited to the shuttle’s christening event. Also, inspired by the series, Italian astronaut Samantha Cristoforeti wore Star Trek uniforms while in space.

Sliding Doors – wanting the show to be believable as possible, Gene Roddenberry included automatic sliding doors all over the Enterprise. Star Trek is often credited with popularizing the concept which is later adopted in modern buildings.

Mobile Phones – the iconic communicator in the Star Trek Original Series became the inspiration for cellular technology. Enabling the technology came first with the first units being giant slabs literally the size of bricks. The aesthetics soon followed to mimic the size and flip action to more closely resemble the communicator until our current generation which is a bunch of uninspired buttonless slates. Many still keep their older flip clamshells and in their minds pretend to be officers from the Enterprise. There are Bluetooth communicators out there which are replicas of the TOS communicator if you know where to look. 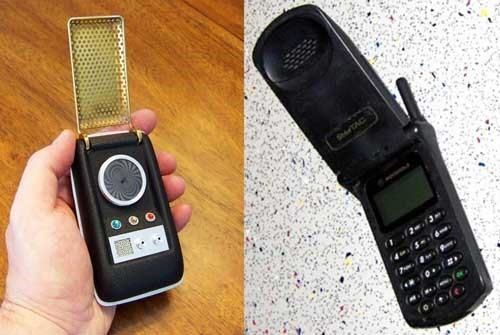 Bluetooth – speaking of Bluetooth, the first wireless in-ear communications device is that silver thingy on Lieutenant Uhura’s ear which probably inspired current hands-free Bluetooth devices of brands such as Jabra. Although looking dated, the same device is worn by the current Uhura, Zoe Zaldana since the new Star Trek maybe of a different timeline but is still in the same time period. It’s unsure whether there’s a working Bluetooth replica of the device since it would look rather silly for real-world use. 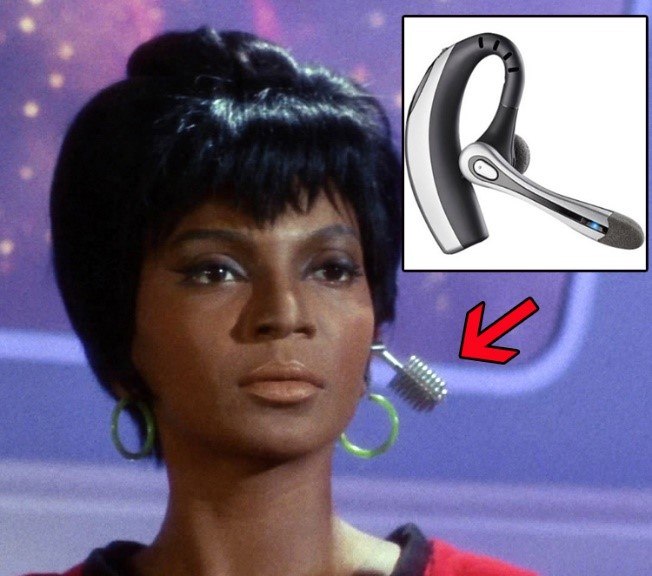 Tablets – Star Trek, the original series first showed the use of portable tablet devices often for submitting reports to the ship’s captain. Apparently, email wasn’t considered in the Star Trek universe but tablet devices were. At first, they were the size of mini-pizza boxes until Star Trek, The Next Generation gave them their slimmer, updated look. We now have the equivalent of these devices in iPads and other tablets. 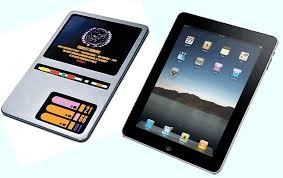 Digital Storage – In the time of the original series, data was stored in large magnetic tape reels similar to movie rolls. Star Trek showed the concept of cartridge-based digital storage which looked like 3 ½-inch floppies. The Next Generation series gave us what they called isolinear chips which became the inspiration for the modern USB pen drive.

Conference Calls – intentional or not, Star Trek also was the first series to show conferences or staff meetings around a computer or communications device. Multinational companies now hold meetings around the world using conference devices such as those marketed by Polycom.

3D Printing – starship crews can have almost anything they want for dinner via food replicators which can create any recipe or drink out of thin air. This was later expanded to any substance or object in The Next Generation series so long as the object has been programmed and there is sufficient power. Current technologies in 3D printing puts us closer to realizing this science-fiction staple.

Augmented Reality – devices that allow the blind to see has always been on one of modern medicine’s to-do lists. Of course, Star Trek being set in the future made that goal a reality, as seen used by the character Geordi LaForge. This time, not only can the wearer ‘see’, he/she can see much more than is humanly possible such as temperature differences and electromagnetic fields. The implementation is slightly different in today’s case. Instead of temperature and other invisible information, augmented reality users are treated to other overlapped information such as area coordinates, the weather and other bits of information that can be squeezed into the small lenses of devices such as Google Glass. Microsoft’s Hololens, however, takes this technology up a notch. 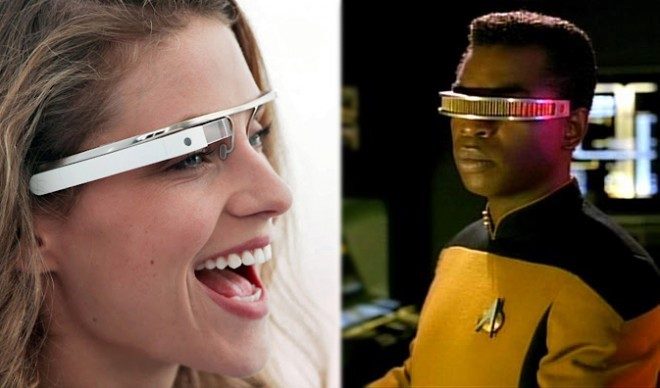 Virtual Reality – everyone was in awe when Star Trek, The Next Generation first showed us the Holodeck technology as a way for starship crews to get much-needed entertainment and R&R due to the isolation and rigors of interstellar travel. The Holodeck takes users to entirely different virtual but physical environments that represent their fantasies to temporarily escape repetitive crew duties. Currently not possible with today’s level of technology, this concept is brought closer to reality through VR entertainment theaters that display a virtual environment through screens augmented by stereo surround sound, temperature control plus smoke and smell effects. Users can experience this technology at home through VR headsets like the HTC Vive and Oculus Rift. 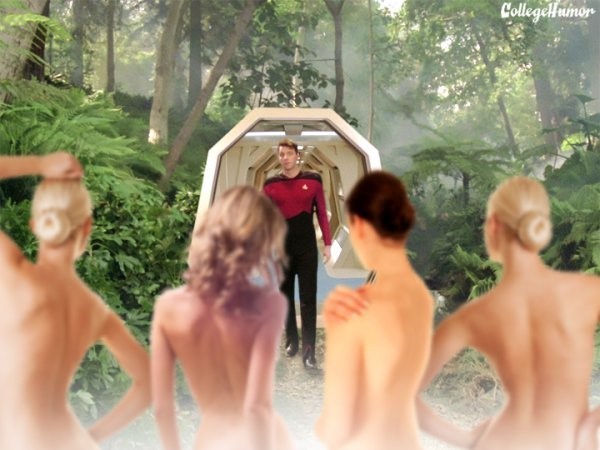 Digital Assistants – Star Trek predicted that humans will interact with computers more naturally by speaking to them instead of that terrifying experience of having to type commands on a text-based console. While the word ‘computer‘ was often spoken to address the ship’s computer to access information, we can now do the same thing by saying ‘Siri’, ‘Cortana’ or ‘Alexa’. No doubt fans of the franchise have devised ways to address their personal assistants as ‘Computer’.

There’s still that little problem called interstellar space travel. Right now, all we’re sending to the Moon and Mars are small robots even putting in doubt man’s lunar landing. For whatever reason, man is putting his sights on Mars instead of debunking conspiracy theory and setting up a base on the moon. The question of interstellar space travel becomes more evident now that we may have found a potentially habitable planet orbiting the nearest star Proxima Centauri. Another concept still unrealized is instantaneous travel through matter transporters. It’s another thing we’re all reminded of whenever we’re stuck in traffic or waiting forever for some package to arrive from China or Eastern Europe.

And lastly, breakthrough medical technology such as perhaps the cure for AIDS and cancer. The ability to perform medical checkups without invasive procedures, diabetes and dialysis pills and hyposprays for those afraid of needles. 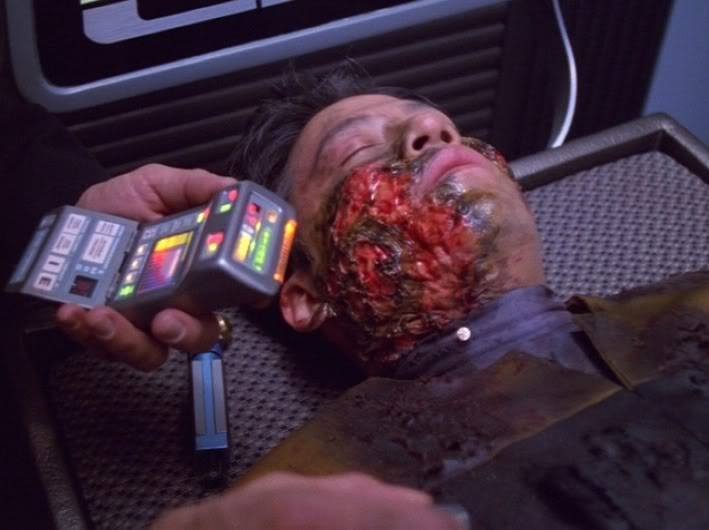 Star Trek is set in the 23rd century, and we’ve accomplished so much in the 20th and 21st. Two more centuries to go.