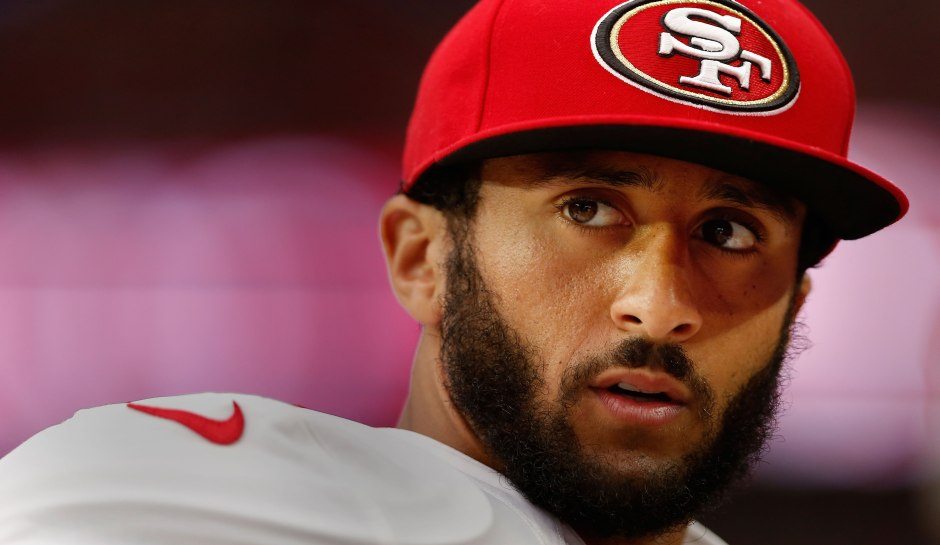 That the NFL’s TV ratings have tanked so far in the current young season is a well-documented fact. For example, Mike Ozanian, writing at Forbes.com, stated the following recently:

“Through two weeks of football the NFL’s television ratings are down across the board. The drop in ratings and viewership is unprecedented in recent years” (September 23rd).

In discussing reasons for the drop in ratings Ozanian mentions the elephant in the room, Colin Kaepernick and the national anthem protests:

“many,” Ozanian writes, “if not most viewers are fed up either because they are against the protests, or just don’t want politics of any kind to interfere with their football.”

The latter point, about people not wanting “politics of any kind to interfere with their football” is an interesting point to consider. There are definitely going to be people out there that are like that, and Ozanian’s remark contains some insight in my view.

However, let’s not forget how political sports presentations were even before Kaepernick entered the NFL. For example, a matter like what the military should be doing overseas is at heart political. Take the Iraq war, a war that was thought to be a mistake by 63% of Americans according to a Gallup poll in 2008. Yet time and time again, North Americans who attended sporting events were told to rise and remove their hats in support of foreign troops. 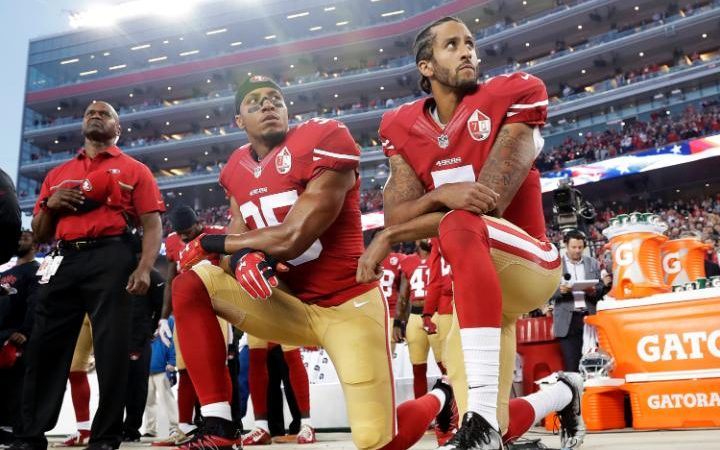 Admittedly someone that supported the troops in Iraq may have been hoping for them to find George Bush 2’s mythical weapons of mass destruction. But whether troops should be supported overseas or simply brought back to the homeland without risking life nor limb is a political opinion. Coercing/pressuring everyone at a sports event to stand and rise in support of political troops arguably made it falsely look like the war in Iraq had broad support – even when it didn’t.

So do people not “want politics of any kind to interfere with their football” as Ozanian suggests? Or are their kinds of politics that “interfere” while other kinds don’t?

It’s interesting how one political position, like Kaepernick kneeling, causes waves and yet another doesn’t really rock the boat at all. If we’re heading towards getting rid of politics in sports, then let’s do it – across the board. No more telling the entire crowd to stand up and support military excursions for propagandistic purposes when only a minority might actually believe in how the government of the time employs the military.

Where politics and sports fuse is a difficult matter to address. For certain, political issues can be far more important than the results of a mere game.

Yet the heart of the issue is if people should have politics forced on them. In my view people have the right to be apolitical or at least the right to take a timeout from politics. Sports have value for such people and Kaepernick shoving his politics into their eyeballs simply isn’t working. On that note, I’ll say this too – making people stand and PRETEND to support the troops in Iraq didn’t work either as George Bush 2’s ratings plummeted faster than the NFL’s TV ratings.

Kaepernick can still be credited with increasing awareness of police brutality over the last few weeks. But in the longer term, I see the situation as absurd and lacking in vitality.

Here’s a quarterback making millions as an entertainer ($11.9M as a base salary; Spotrac). Yet he’s causing viewers to change the channel because they just want to chill out for a few hours, not debate the role of police officers in civilian society. I think the absurdity of that situation is what will cause the overall situation to change. After all, Kaepernick plays in the NFL so what is bad for the league is, in at least some ways, bad for him as well.

A situation that works is simply going to the football game to play football and participating in the customs associated with that. People go through the fake motions all the time at work, something that is inescapable in my view. All Kaepernick has to do is be an entertainer at his job and then join forces with others that are concerned about police brutality in his private time. People do similar things like that often because it actually works while hurting the company that employs you does not.

In conclusion, if Kaepernick does decide to continue to kneel, then hopefully no one stomps on his right to express himself. I think the action has run its course, but I also think he has his rights. Maybe the smartest thing to do right now is to just claim that he’s happy to have drawn some attention to an important issue and abandon the on-field component of his protest. Doing something that hurts the ratings of the NFL when you are an NFL player is clearly not a sustainable action, and it’s entirely futile to try to get people to pay attention to something they aren’t interested in when they’ve got a remote control at their disposal.