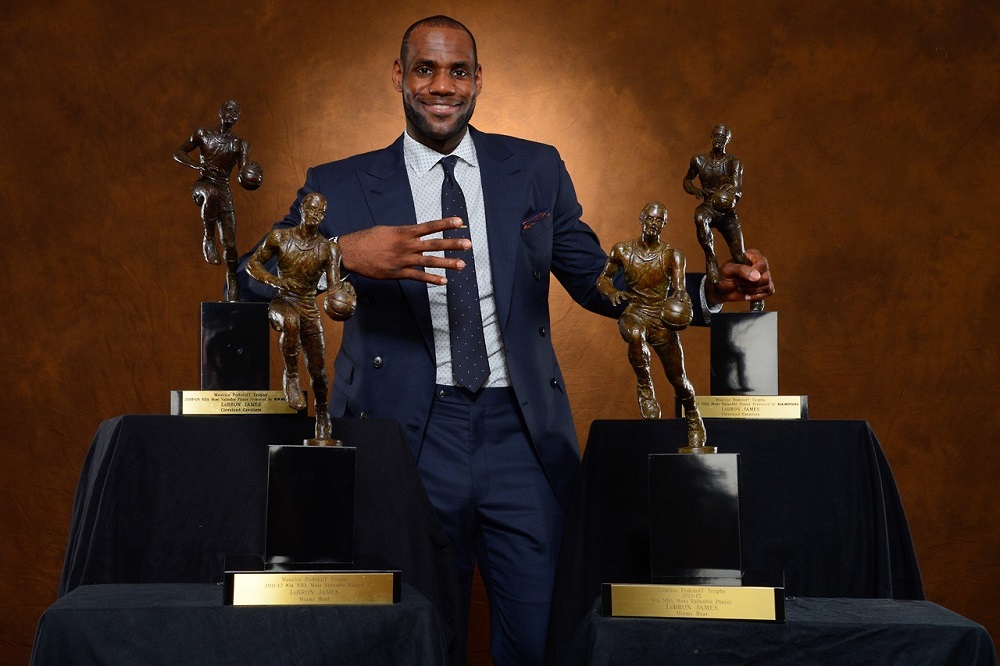 If you ask Cleveland Cavaliers superstar LeBron James about any of the candidates for 2017-2018 NBA MVP, he’ll give a raving review for the man. James Harden is having his best season, and the Houston Rockets have a lot to show for it at No. 1 in the Western Conference. Anthony Davis stepped up to carry the New Orleans Pelicans to a 10-game win streak after losing DeMarcus Cousins for the season. Reigning MVP Russell Westbrook has played out of his mind for the Oklahoma City Thunder despite the team’s overall struggles.

But, when asked who he would vote for, James didn’t hesitate to name himself.

“I would vote for me,” said James. “The body of work, how I’m doing it, what’s been happening with our team all year long, how we’ve got so many injuries and things of that nature, guys in and out, to be able to still keep this thing afloat, I definitely would vote me.”

James is playing arguably the best basketball of his 15-year career. On top of that, he’s on pace to start and play in all 82 games for the first time in his lengthy NBA career. He is averaging over 27 points per game to go with career-high averages in both assists and rebounds—and James is 33. It’s like he’s somehow getting better with age.

While Harden seems to be the unanimous lock for MVP this season, James isn’t alone in believing that he desires his name called for the award instead.

“He’s continued to prove everybody wrong and find new levels,” said former teammate and best friend Dwyane Wade. “In his 15th season, to be 33 years of age and to be playing the way he’s playing, as consistent as he’s playing, that is as impressive as anything that anybody has ever done.”

Now, I’ve heard the idea of splitting up the MVP award into two parts, one for the Best Player and one for the Best Season, but that doesn’t seem fair. LeBron is the best player in the NBA, as he has been since he joined the league. He would win “Best Player” every year, with the rest of the NBA fighting for a shot at “Best Season.” While I agree that we should acknowledge that James is indeed the best player in the game by far, regardless of who wins MVP, the extra award seems like an unnecessary stroking of his ego.

James’s season numbers, however, fall right in with what he was putting up between 2008-2013, the five-season stretch over which LeBron took home four NBA MVP awards. He’s averaging more assists per game, more rebounds, and a significantly better shooting percentage. His scoring average is only 0.4 points per game off. And he’s 33.

“At this point in my career, I’m just trying to break the mold, break the narrative of guys in their 15th year,” said LeBron. “I’m trying to do things that have never been done before. It’s crazy because I’m not setting out to do it. It’s just kind of happening organically. I’m just training my body and training my mind and going out and playing and seeing what happens.”

The only guys that have put up numbers like LeBron is doing this season are Oscar Robertson, James Harden, and Russell Westbrook, and they all did it in their 20s. We’ll see how the latter two are playing when they’re James’s age.

The Cavs are in a position to finish as high as the No. 3 seed in the Eastern Conference, almost solely thanks to LeBron. While the NBA MVP might be out of reach, you can never truly count James out for the NBA Finals MVP award.

“I’ve said it,” said James. “Obviously, I’ve had some unbelievable seasons before, but I’ve said it: This is the best I can go, just from a complete basketball player standpoint.”