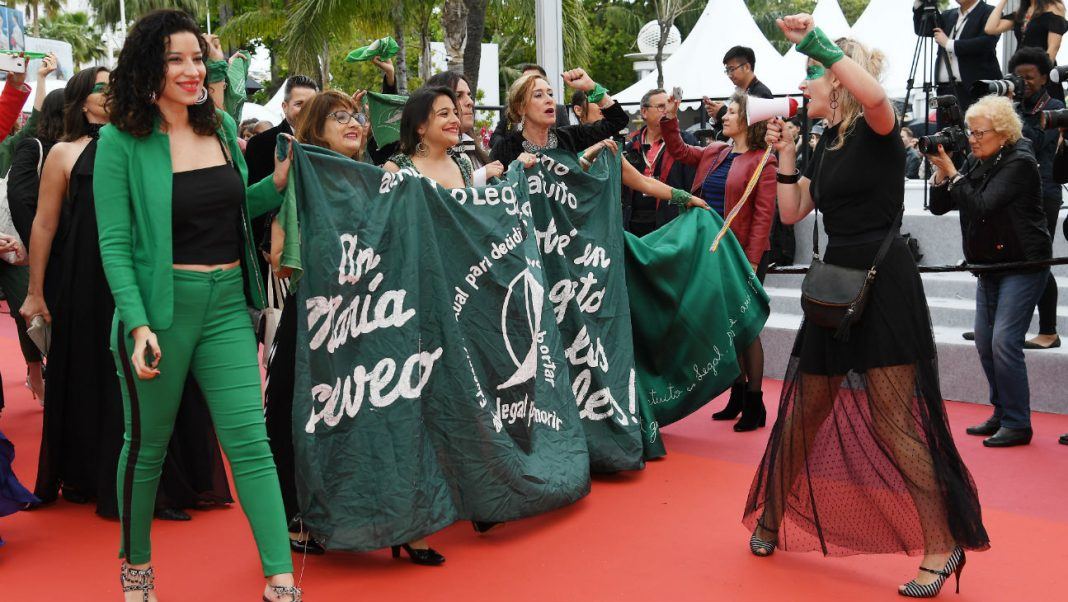 Ahead of Saturday’s premiere of an Argentine documentary on abortion, dozens of women demonstrated for abortion rights on the red carpet at the Cannes Film Festival in France.

Women, including the filmmakers and activists seen in the film, waved green handkerchiefs and carried a large banner while walking the Cannes carpet at the premiere of Argentine director Juan Solanas’ “Let It Be Law.” The documentary depicts Argentina’s battle to legalize abortion.

Argentina’s Senate last year rejected a bill to legalize abortion, prompting protests in Buenos Aires streets. Green handkerchiefs have come to be symbol of the movement. A modified version of the bill is to be presented to Congress on May 28.

The film’s debut comes as abortion rights are also being fiercely contested in the U.S. On Tuesday, the Alabama Senate passed a bill that would outlaw almost all abortions in the state, including those involving pregnancies from rape or incest.

Many in the movie industry in Cannes have followed the developments in the U.S. with concern.

“What’s happening in Alabama is so important in the world,” Eva Longoria, who produced the Netflix documentary “Reversing Roe,” said Friday at a “Women in Motion” event in Cannes. “It’s going to affect everybody if we don’t pay attention.”

Restored The Shining Premieres At Cannes

Thirty-nine years later, Jack is still not a dull boy.

In a new pristine restoration, Stanley Kubrick’s “The Shining” premiered at the Cannes Film Festival on Friday evening. It was the second straight year that a Kubrick movie landed on the Croisette, following last year when Christopher Nolan brought what he termed an “unrestored” cut of “2001: A Space Odyssey.”

This time around, Alfonso Cuaron introduced the film, alongside Kubrick’s daughter, Katharina Kubrick, and Leon Vitali, Kubrick’s longtime assistant. Vitali was himself profiled in the 2017 documentary “Filmworker,” also a Cannes entry.

“If anybody hasn’t seen it on the screen before, it’s a different experience completely,” Vitali told the crowd. “Don’t worry, you’ll all come out of here alive.”

Cuaron’s presence in Cannes was notable. His film “Roma” was set to premiere at the French festival last year. But when Netflix and the festival couldn’t agree on distribution terms for the streaming giant’s films, Netflix pulled out of Cannes and “Roma” headed instead to the Venice Film Festival, where it won the Golden Lion prize.

Cuaron didn’t oversee “The Shining” restoration. That role went to Steven Spielberg, whose 2018 sci-fi thriller “Ready Player One” included a lengthy homage to “The Shining.” But Cuaron lavished praise on “The Shining” while playfully prodding conspiracy theorists that dig into the film for hidden meanings.

“Actually, tonight, we’re going to watch it backwards, because backwards, we’ll see it with the message Kubrick (intended),” joked Cuaron.

The 2012 documentary “Room 237” chronicled some of those theories, including that “The Shining” is really about the moon landing or about the treatment of Native Americans. Katharina Kubrick used an expletive to describe the guessing games around “The Shining.”

“This is a seriously cool ghost movie. Don’t believe any of the conspiracy theories because it’s all s—,” she said. “I only said that because I’ve had some champagne.”

Cuaron agreed. “Kubrick would have really gotten a laugh out of all of these conspiracy theories,” said the director. “By all reports, he believed in films not to be explained but to be experienced. A little bit like music, he used to say.”

“The Shining” restoration will be released on home video Oct. 1.

Les Miserables Grabbed Up By Amazon

Amazon Studios has nabbed U.S. rights to the French-language drama “Les Miserables,” marking the first significant deal for a domestic acquisition at the Cannes market.

The film, from writer-director Ladj Ly, screened in competition Wednesday and drew solid reviews for its gritty, loose take on the Victor Hugo novel of the same name. CAA Media Finance negotiated the deal on behalf of Ly, who was recently signed by the agency. Wild Bunch is handling international sales.

A source pegged the deal at $1.5 million, making it the biggest sale ever at Cannes for a first-time director.

Written by Ly, Giordano Gederlini and Alexis Manenti, the film chronicles the grim realities of life in the projects in Paris’ suburbs and was inspired by riots in 2005 that sparked headlines around the world.