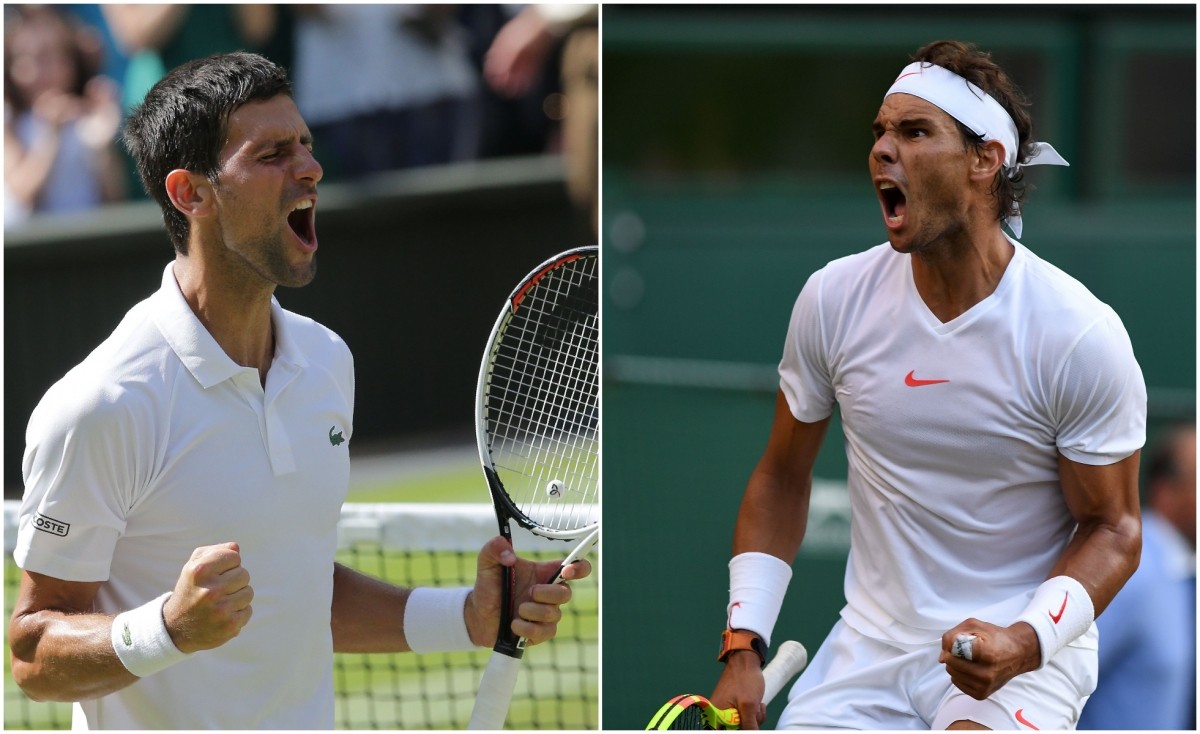 Everyone was rooting to see Rafael Nadal face off against Roger Federer at the 2019 Italian Open, but fate gave us another great match to look forward to: Rafa vs Novak Djokovic. That will be one to watch with much anticipation.

After losing in the semifinals of three straight clay-court tournaments, Rafael Nadal looked more like his old, dominant self when he beat Stefanos Tsitsipas 6-3, 6-4 to reach the Italian Open final on Saturday.

It was a measure of revenge for Nadal after losing to Tsitsipas in three sets at this stage in Madrid last week. This victory should also restore Nadal’s confidence as he seeks a record-extending 12th title at the French Open starting next weekend.

“The main thing is I am playing better. If I play better, I know I’m going to have chances to be in finals and to win semifinal matches,” Nadal said. “If you are not playing well, (beating) the best players of the world is much more difficult. … I have margin to keep improving. But I am doing the right steps to be there.”

In Sunday’s final, Nadal will resume his rivalry with top-ranked Novak Djokovic, who faced an unusually high number of drop shots from Diego Schwartzman before winning 6-3, 6-7 (2), 6-3.

Djokovic also required three sets to eliminate Juan Martin del Potro in the quarterfinals, meaning he has been on court for more than 5 ½ hours over the last two days.

It will be the 54th career meeting between Djokovic and Nadal, with Djokovic leading the series 28-25. The pair has split the four Italian Open finals they’ve played. They last met in the Australian Open final won by Djokovic in straight sets.

“He’s my greatest rival of all time,” Djokovic said. “Every time we get to play each other it’s a thrill. It’s the ultimate challenge.”

Nadal is aiming for a record-extending ninth trophy in Rome while Djokovic is seeking his fifth title at the Foro Italico.

Nadal is in the middle of his longest title drought to begin a season since he came onto the scene in 2004. His last trophy came last August in Toronto.

The crowd attempted to encourage Tsitsipas with chants of “Tsi-Tsi-Tsi, Pas-Pas-Pas” but the 20-year-old Greek player couldn’t keep up with Nadal on the long rallies — even though he didn’t play a day earlier after Roger Federer withdrew injured from their quarterfinal.

Conditions were much slower than on the high-altitude court in Madrid, which favored Nadal and made it tougher for Tsitsipas to execute his attacking game.

“The shots that I played today, I played similar shots last week,” Tsitsipas said. “Today those shots felt really slow and he had plenty of time to pass me when I was approaching to the net. .. The court speed was the difference.”

Midway through the first set, Nadal produced a blistering forehand winner up the line on the run, drawing a loud roar from the packed Campo Centrale crowd.

In the women’s tournament, Johanna Konta rallied past sixth-seeded Kiki Bertens 5-7, 7-5, 6-2 in nearly three hours to reach the biggest clay-court final of her career.

Pliskova didn’t immediately realize she won because she lost track of the score.

Pliskova is having a solid year, having reached the Australian Open semifinals and the Miami Open final after opening the season with a title in Brisbane, Australia. The Czech player recently announced she promoted four-time Italian Open champion Conchita Martinez as her head coach.

Konta’s only previous final on clay came recently in Rabat, Morocco, where she lost to Sakkari.

“I’ve never really doubted my ability on the surface,” Konta said. “I won a lot of my first junior titles, first professional titles on clay. I’ve always felt that I have a game that has the ability to do well on this surface.”

On Friday night, Novak Djokovic had to give his 120% at Foro Italico to overpower Juan Martin del Potro in the quarter-final in Rome saving two match points to set the duel against another Argentinian. The crowd had a chance to enjoy another thrilling encounter under the lights on Saturday, with the four-time Rome champion taking down Diego Schwartzman 6-3, 6-7, 6-3 after two hours and 31 minutes, advancing to the 49th Masters 1000 final and the ninth in Rome!

Two years ago, Schwartzman pushed Novak to five sets at Roland Garros and he gave his everything tonight as well, facing only five break points but getting broken four times. On the other hand, Novak stayed rock-solid behind the initial shot, playing against four break points and giving serve away twice to mount the pressure on the other side of the net.

They had an identical number of errors and almost the same amount of winners, drawing the most from each other in both the shortest and more extended exchanges to give the crowd something to remember for a long time. Novak held in the opening game with a service winner and that set the tone for the next six games, with brilliant hitting from both in the service games that brought them to 4-3 after just 27 minutes.

The Argentinian was on the same level as the Serb before the eighth game when he started to miss more, netting a backhand to hand the break to Novak who delivered three winners in game nine for a 6-3 after 36 minutes. Djokovic had a small advantage in the shortest rallies and more noticeable one in the mid-range points with five to eight strokes, delivering one good hold after another to secure the opening part of the match.

From almost an indoor or grass tennis, things were back to “normal” in set number two where they both won more than 40% of the return points in a wild chase towards the finish line that lasted for some 75 minutes!

From 3-2 for Schwartzman, they traded four consecutive breaks and the Argentinian wasted a 4-2 and a 5-3 lead to send the set into a tie break and push the crowd further towards the edge of their seats. Fighting like a lion, Novak broke back at love in game seven and again in the ninth game to extend the set and earn the opportunity to close the match in the tie break.

Instead of that, Diego won all points on serve in the breaker and grabbed two mini-breaks for a 7-2, setting up a decider after an hour and 50 minutes. Battling to find the last piece of energy left in the body, they traded five easy service games in the final set before Novak made the crucial step and broke Diego for a 4-2 lead after a backhand error from the Argentinian, sealing another impressive triumph with a hold in game nine to join Rafael Nadal in the title match.

Colombia’s former Davis Cup captain, Miguel Tobon, has been suspended for a year and fined $20,000 by the Tennis Integrity Unit for accepting payoffs in return for tournament wild-card entries.

The TIU says Tobon was found guilty of “negotiating to sell, or attempting to sell, wild cards for singles and doubles events in Colombia to six individuals” in 2017.

Tobon was also ordered to pay $6,000 for the money he received from the sale of the wild cards.

Tobon has coached some of Colombia’s best players, including Nicolas Massu of Chile, Alejandro Falla, and Santiago Giraldo.