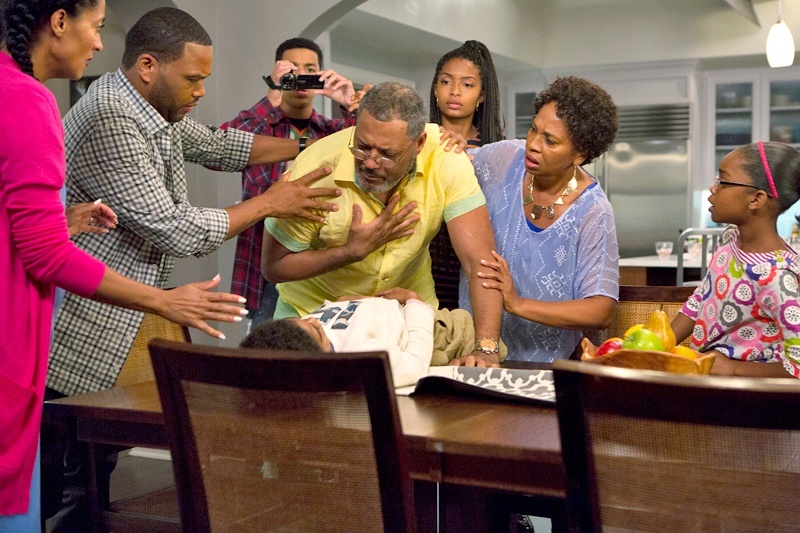 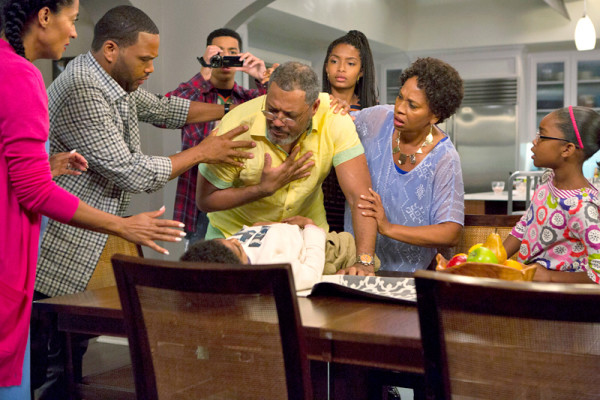 Health issues are front and center on Blackish, they touch on the all too familiar stereotype that black folks don’t go to the doctor.

Dre talks about the importance of getting a yearly check-up and has the experience of going to the doctor after 40 for the first time which means…. A prostate exam.

Back at the house Dre acts like a “little bitch” after his exam to which Bow tells him to “get over it.” From his drama, they find out that Pop’s has never had a prostate exam and has not been to the doctor since 1985. This sparks Bow to set him up with an appointment where she works.

The next day, as she takes him to see the doctor, it is quite an experience. Patients screaming, others asking “what did you do to me” and the doctor that did Dre’s exam tells her in passing that he’s going to see his mal practice lawyer “to go over my story again.” Pops looks at him, says “hell no” and drags Bow out. “Old man strength is real.”

At his office, Dre tells the guys what’s going on with his dad and they each tell him that it is a big deal for his dad to go to the doctor. They rattle off all the things that not going to the doctor gets you, which makes Dre all the more worried.

When he gets home, determined to not let what the folks at his office said get to him, he keeps it cool and collected…. Until Bow tells him “don’t freak out,” his dad has a clogged artery and needs “don’t freak out” a minor balloon angioplasty.

Going full on drama king, he slings himself on the couch crying, “My old decrepit dad is going to die…. Soon.” While going to bed, he asks Bow how to say “goodnight” to a man about to go into surgery. Drama much Dre? He goes to sing Luther Vandross “Dance with My Father” to his dad and Pop’s swings on him, which makes Dre even more concerned because he missed.

The kids discuss what’s going on with Pops in the twin’s room. Zoe and Jack end up making a bet about claiming what is he’s in the event he dies and Junior decides to make a video to remember Pop’s by while he has the chance. Oh and Diane is all about getting power of attorney.

The next morning, Grandma Ruby makes a big breakfast including “real bacon” and pancakes. She gives an extra big helping to Pops. Their back and forth is just too much, in a good way. Bow comes in complaining because she doesn’t like the kids to have a sugary breakfast and throws some low key shade at her mother in law when she asks Pops, “Why do you have to be the one sick?” Zoe and Jack place dots on him, Junior records him and Diane gets him to sign “a permission slip” for school. Pop’s also let’s them know that he is not going to get the surgery because he got a second opinion- the boys at the barber shop.

Back at the office, after telling the guys about this dad needing the procedure and his refusal to get it, they tell Dre to get his dad to the hospital because that’s not anything to play with.

Later that night at the house, Dre tells Pops that he’s getting the surgery, to which Pops says, “Boy I’m yo father, you don’t tell me what to do.” He runs into the kitchen ignoring Dre and picks up Jack like a sack of potatoes on his shoulders. As he does, he experiences shortness of breath, his knees buckle and everyone rushes to him. “I’ll have the damn surgery,” he says obviously shook by what just happened.

At the hospital, Pops is nervous. He tells Bow he wants her in the room with him to which she says yes but just to appease him because “there are a million protocols” as to why she can’t be in there. She ends up having to leave because Diane got sick, which means Dre stays in the waiting room alone. He talks to a lady that he is boring about his “daddy” rambling on and on when a balloon pops and scares the hell out of him. “My daddy dead, my daddy dead… damn, damn, damn, James.” Just then he is interrupted by the doctor who tells him Pops is fine and excitement ensures.

At the house, little Johnson is fine and Rudy realizes that she spoils her grandkids too much as she let Diane drink a milkshake, chase it with churros and ride a pony in the heat. Ruby calls herself a bad grandma and Bow corrects her, “no you’re a bad person, but a good grandma.”

Ruby visits her ex-husband in the hospital and they are very cordial. “I want to be the favorite grandparent not the only one.”

In the end, Dre gets his dance with his father and Pops objects to no avail.