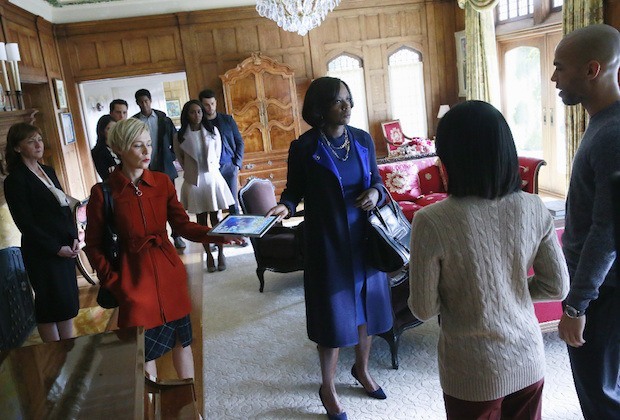 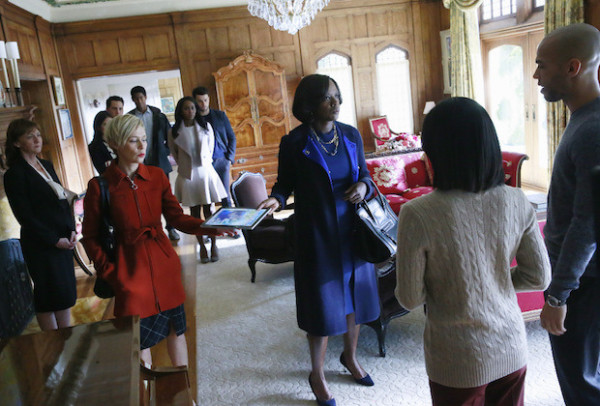 Barely into the new season and “How to Get Away with Murder” goes there, and brings us one step closer to knowing what happened that fateful night in which we are to believe that Annalise has been stabbed (or shot) at the end of this season.

We see Annalise all natural, speaking into a tape recorder in her room. She goes over the many reasons why Caleb and Catherine Hapstall (the two siblings who’s case she’s working) would have killed their parents. This scene sets up a central theme of the episode and that is loneliness.

She is so lonely apparently, that she hears things… in the basement. She calls West over, at like 2:30 in the morning, to investigate and it’s a mouse, that he kills. Their relationship is quite interesting and there is an underlying sexual tension between them, to me. I would not be surprised if they get it on before the season is over.

The case this week involves a woman, Tanya who puts on sex parties, accused of killing her secret lover (cue music), a frequenter of her sex parties. Annalise fights to get to the bottom of what happened and has some surprises that her client did tell her about. Of course, nonetheless, she deals with them in classic Annalise style- find the dirt and expose it. Which she does and we are pretty sure that the victim’s wife gave him a combination of pills once she found out he had been cheating.

While working on the other partygoers at Tanya’s sex party the night of the death, they find out through a magazine cover, that Caleb and Catherine Hapstall are lovers? Annalise and the team immediately go to them for answers and Caleb kind of puts her in her place, which is interesting to say the least. I mean come on it’s Annalise Keating. It is later revealed that their housekeeper, who has never been coy about her suspicions of their innocents, leaked the picture of the siblings because she believes they are guilty. Hmmmm, maybe it’s her.

Asher continues to be blackmailed by ADA Sinclair and we find out that whatever she has on him is something to do with a girl named Tiffany and Trotter Lake. She has him steal the recorder that Annalise keeps in her desk and we find out that he was the sound “in the basement” that she heard the night West came to kill the mouse.

His deal with ADA Sinclair interferes with his relationship with Bonnie who he continually stands up or is late showing up for. While at the courthouse on the day of Tiffany’s being verdict hearing, Sinclair sends a picture of Tiffany to his phone, which Bonnie sees which prompts her to break it off with him. He goes along with the story that it is a woman he’s been seeing behind her back because he can’t tell her the truth.

Speaking of Tanya, she has an interesting way of showing her appreciate for Annalise winning her case. Because Annie destroys her dead lover’s wife on the stand, Tanya is disgusted with her. She asks with such unbelief “How do you sleep at night” and Annalise, in an awesome response says, “Alone, on very comfortable sheets.”

Laurel and Frank, who by the way is fine as hell, try it again, kind of. He apologizes for leaving her with “blue balls” and tells her that she should get to know the real him. She tries to as they sit in the car on a “stake out” but he doesn’t tell her all the gory details of what he has actually done in his life. Which she later tries to get out of Bonnie over drinks but she’s not spilling any beans on Frank (and you know she has a lot to tell).

Conner and Ollie have one more day until “D day” which they can’t wait for. In this episode, Connor shows that he has really changed as he didn’t hook up with anyone at a sex party he and Michaela attended to gather info for Tanya’s case. Ollie is surprised because even he would have given in. (Um maybe that’s why you are in your current situation Ollie). They get it on.

Speaking of Michaela, the big “gasp” of the week is that she has NEVER had an orgasm. It comes up when they all talk about sex and everyone sympathetically tells her she needs to have an orgasm.

Which is does when she finally goes on another date with Levi aka Eggs911 (who she doesn’t know is Eggs911). West, however, does and confronts him about it. Levi says that he is Rebecca’s foster brother and hasn’t heard from her since the day before she went missing (was killed). This piques West’s interest and makes him question the validity of what Annalise told him about finding Rebecca. He then forges an alliance of sorts with Nate, whom we all know is looking to get back an Annalise for allowing him to almost go down for Sam’s murder.

We find out about their plan when Annalise, who shows a lot of vulnerability here, shows up at Nate’s house dressed up with wine pretty much begging him to forgive her and “try again.” She misses him. He tells her to go home and as she turns away, he lets her know that he’s not saying no, he’s just not ready yet. We then see West standing behind a corner in Nate’s apartment after he closes the door and Nate tells him, “She took it.”

At the end, we know that Nate knows about whatever happens to Annalise and it looks like he may even help the Keating Five.